Omega-3-6-9 is a combination of fish oil, borage seed oil, vitamin D, and vitamin E. It’s one of over 250 products sold by Carlson Labs, an Illinois-based company founded in 1965. For over fifty years they’ve been a family-owned quality-focused corporation, currently located in the Arlington Heights suburb of Chicago.

Carlson seems to be a rather transparent company, focusing on quality and delivering results to their customers. They have a lot of information throughout their website, and are more active on social media than many of their competitors. If you have any questions or comments it’s easy enough to get ahold of someone from Carlson.

The recommended dose is two capsules per day, with or without food, whichever you prefer. Carlson promises a fresh, potent, and pure product that aims to promote heart, joint, vision, and brain health.

Unlike many fish oil products, there isn’t any more beyond what’s necessary to give you Omega-3s. Traditionally there’s 1000 mg of fish oil per serving, plus whatever extras the manufacturer has ladled in. Omega 3-6-9 is simple and effective, with 400 mg of fish oil and 400 mg of Omega-3s in the form of EPA and DHA.

This is one of the few products to advertise not only the popular Omega-3s, but Omega-6s and Omega-9s as well, and in balanced amounts. The Omega-3s come from anchovy and sardine, while the 6s and 9s are from borage seed oil.

The 400 mg of Omega-3s is a little lower than other Carlson products and still a good amount. Borage seed oil is a terrific inclusion and there are no side effects unless you’re also consuming a group of dangerous chemicals called pyrrolizidine alkaloids (PAs). The oil is good for your joints and lungs, with a lot of potential benefits that are still being studied.

There’s plenty of vitamin D, which is more than most people need but still in safe amounts. Supplements tend to contain 400 IU of D, the minimum level set by the Institute of Medicine, while Omega 369 has 2,000 IU. Vitamin D does have excellent benefits even in high amounts, but realistically the dose doesn’t need to be more than 1,500 IU. And people at risk for kidney stones should not generally take vitamin D supplements. The vitamin E is also high, but with vitamin E there’s a chance of side effects like nausea, fatigue, and headache. Still, Carlson has made sure the amount of E is well under unsafe levels. They seem to have carefully researched this formula.

Each bottle lasts for 45 days, keeping Omega 369 on the inexpensive side. If it lasted for fewer than 30 days, it would be closer to the medium price range. As with other Carlson products, you can find this in local stores as well as online retailers like Amazon.

This is a balanced formula, although the amounts of the vitamins D and E are much too high. They aren’t in unsafe amounts, as Carlson labs knows better than to do that, but it’s still a lot more than most people will need in their daily diet.

Like many of Carlson Laboratories’ products, this is a high quality supplement at a reasonable price. It has been independently tested at an FDA-registered laboratory to ensure Omega 3-6-9 does precisely what it means to, and contains the advertised amounts of ingredients, keeping Carlson’s tradition of quality in full force. The formula here is slightly more potent than necessary, but you can take 1 capsule a day to stretch out your supply and still get the great benefits of fish and borage. 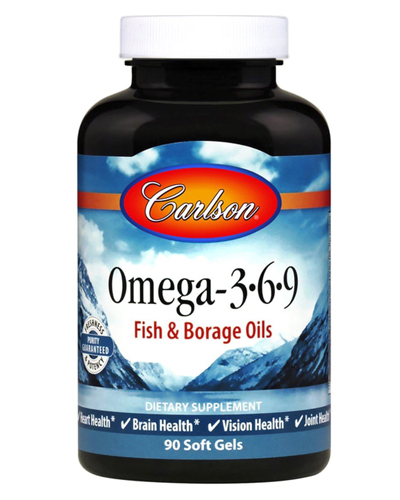 Omega 3-6-9 is a long-term solution for a healthy mind and body which works. The serving size is two capsules, but you could easily just take one to feel results. This would turn each bottle in nearly a three month supply, which is very inexpensive for this type of supplement. Like any supplement Omega-3-6-9 may work differently for different individuals, although there's always evidence to show the benefits of fish and borage plants. Including their oils in one easy-to-take product is a smart move that garners positive reviews.