Advanced Memory Complex is advertised as being a dietary remedy that was specifically created to sharpen the mind, while also improving mood. The supplement is designed by a company named Botanic Choice, which was founded more than 100 years ago, in the United States.

The company was built on a little cottage in Hammond, Indiana in the year 1910 by a herbalist named Joseph Meyer, who dedicated his life to studying the positive effects of natural remedies on people’s everyday lifestyles.Despite the fact that its founder died, the business survived with the help of Tim Cleland and David Meyer. Starting with year 1990, the company began selling nutritional products that specialize either on functions and organs of the body or are meant for the overall well-being. Nowadays, the company manufactures and distributes a large number of remedies, with some of them approaching modern health concerns such as weight or sexual health.

Advanced Memory Complex is in fact a mixture of some B vitamins, amino-acids, and other nutrients that should enhance neurotransmitters creation in the brain, thus enabling a better combination on a cellular level. This should lead to a bettering of certain cognitive functions likes thinking, concentration and memory. Hence, it is suggested for individuals that suffer from cognitive difficulties, older people, or those who are having frequent troubles remembering things.

1) What is Advanced Memory Complex?

Advertised as a remedy aimed at improving brain functionality by bettering neuron connection, the supplement consists of a proprietary blend combined with a number of essential B vitamins. The blend contains some ingredients which are generally included in nutritional remedies that are needed for cognitive improvement, such as Ginkgo Biloba and Gotu Kola. Some of these herbal ingredients were scientifically researched and showed positive results in terms of cognitive enhancements, while for others results were inconclusive. Moreover, there is a large number of people that reported positive effects after consuming similar remedies based on these same ingredients.

Additionally, the formula contains some B vitamins, each with unique properties. The largest featured amount per serving is for Vitamin B6. Also known as pyridoxine, the nutrient was revealed as beneficial for a series of behavioral and mental conditions including Alzheimer’s disease, autism, and ADHD. There are even some people that believe it may relieve symptoms of carpal tunnel syndrome.Vitamin B6 is essential for the body, particularly for the proper brain development and maintenance. Although the vitamin is generally considered safe, in some people it may lead to occurrence of side effects, such as sleepiness, tingling, stomach pain, and loss of appetite. As always, pregnant or nursing women should consult a personal healthcare provider if they decide to follow this treatment.

3) Is Advanced Memory Complex Right for You?

This dietary supplement is a combination of a proprietary blend which includes herbal ingredients, amino acids and other nutrients and certain essential B vitamins. The blend features some ingredients that are often included in nutritional products which advertise cognitive improvement as a core benefit. These ingredients are Ginkgo Biloba, Ginseng (Eleuthero), and Gotu Kola. Ginseng has been the subject of numerous research studies focused on demonstrating its therapeutic relevance for health concerns including concentration improvement, memory enhancing, athletic endurance and physical stamina increase, or relief of depression and anxiety feelings.

Also, the manufacturer also uses the essential B vitamins, nutrients vital to various body processes. Vitamin B12, for instance, is essential to energy production and the process of carbohydrate breakdown. It also helps with maintaining a healthy nervous system, with direct benefits in reducing stress and depression. Vitamin B6, on the other hand, was proven reliable for some cognitive and behavioral disorders such as Alzheimer’s disease, autism, and attention deficit-hyperactivity disorder (ADHD). The nutrient has also been included in treatment plans of carpal tunnel syndrome, although the extent of its benefits in this condition needs further research. Vitamin B6 is essential for proper development and maintenance of brain health all throughout the life. Side effects may sometimes occur with B6 excess consumption and include sleepiness, loss of appetite, tingling, and stomach pain.

There are online customer testimonials about Advanced Memory Complex. What is being reported includes:

Advanced Memory Complex is ideal for people who are specifically focused on improving their memories. If you are looking for a more comprehensive brain health supplement, you may consider something like Onnit Alpha Brain or Qualia Mind. These supplements support memory as well, however they have a much broader range of benefits, including improved focus and overall brain health support.

5) Precautions of Advanced Memory Complex Use

This supplement is found in bottles that hold thirty capsules. The suggested daily intake is one capsule with a meal; therefore, a bottle should last approximately one month, should the daily dose not be exceeded. However, a doctor may indicate that you raise the dosage. The price for which the formula is sold is moderate and can even be considered “cheap” by regular customers who have tried their Auto Refill Program (in which case both the shipping costs and the unit price of the remedy is noticeably decreased). Furthermore, customers may benefit from special offers on their birthdays, should they submit these details with the manufacturer.

7) How to Use Advanced Memory Complex

There are no side effects mentioned forAdvanced Memory Complex.

8) Our Verdict on Advanced Memory Complex

Advanced Memory Complex is promoted as a nutritional product which targets memory improvement. It contains a combination of a proprietary blend of herbal extracts, amino-acids as well as other nutrients in relatively small amounts plus three vitamins from the B group.

Advanced Memory Complex is designed for improvement of neuronal connection, thus easing the way in which impulses are led towards the brain. This results in the improvement of both short-term and long-term memory. The formula is not unique, as it contains some very popular herbal and non-herbal ingredients. Some may interact with one another to determine certain side effects, which are not detailed in any way by the manufacturer. 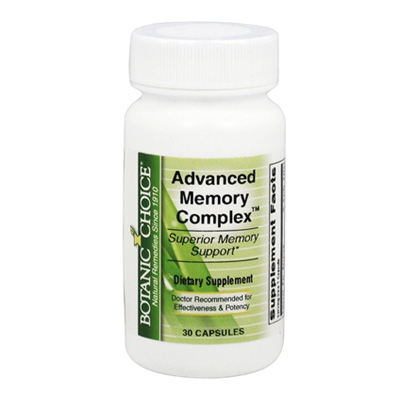 clear
Q:
What are the active ingredients in Advanced Memory Complex?
A:

Q:
What is Advanced Memory Complex supplement?
A:

Advanced Memory Complex is a dietary supplement designed to sharpen the mind and improve mood. The formula was created by Botanic Choice and features a mixture of herbal extracts (Ginseng, Gotu Kola and Ginkgo Biloba), amino-acids and B vitamins. The formula works by improving neuronal connection and neurotransmitter synthesis at brain level. The supplement is recommended for people with cognitive impairment, elders, or who feel a loss in retention and concentration capacity. No side effects are mentioned for  Advanced Memory Complex.

Advanced Memory Complex represents a nutritional supplement advertised to result in significant memory enhancement. The formula features a combination between a proprietary blend composed of herbal extracts, amino-acids, vitamins and other nutrients in smaller amounts. The supplement has not been the subject of any documented research study or clinical trial, making it difficult for us to evaluate its actual Effectiveness. No consumer testimonials have been identified, either, at the time of this review. As with all non-FDA approved dietary supplements, it would be wise to seek out the advice of a healthcare provider who could assess if this is the right medicine for your condition.