Memorex IQ and Memory Boost Review – Is it Effective?

The formula is manufactured by Blooms Health Products, an highly innovative Australian company founded over for 75 years ago, in 1936. The company manufactures and markets a large number of health supplements from blood boosters to nutritional wellbeing foods to sleep, stress and anxiety remedies.

The formula is recommended for adults who wish to prevent age related cognitive decline or provide their brain with the nutrients necessary during mental challenging periods. According to the manufacturer, Memorex IQ and Memory Boost is also a free gluten, yeast, milk derivatives, lactose, artificial color, flavor and preservatives formula, which makes it a good choice for people with allergies or looking for a natural product.

1) Memorex IQ and Memory Boost at a Glance

Tyrosine is an amino acid used by cells in the process of protein synthesis. Additionally, Tyrosine is part of the synthesis process of the neurotransmitter Dopamine, a central player in the brain’s reward and punishment system, behavior and cognition, working memory, mood regulation and learning process. Dopamine is also linked to experiencing the feelings of pleasure. Tyrosine is hence commonly used against depression, attention deficit disorder (ADD), attention deficit-hyperactivity disorder (ADHD), anxiety and mood regulation.

Bacopa Monnieri or Brahmi is an Ayuverdic medicine dating back to ancient India. Today, its popularity among herbal supplements producers has increased, being used for its potent brain tonic qualities. Scientific research shows it has the ability to increase mental alertness, focus, recall and memory and to promote mental relaxation. Although considered generally safe, its use may cause increased bowel movements, nausea, dry mouth and fatigue.

Promoted as a combination of two herbal ingredients that have been previously used in similar natural supplements, Memorex IQ and Memory Boost also contains two amino-acids: Tyrosine and Taurine. The product has been advertised to improve cognitive performances while delivering enhanced attention and learning functions. As it’s been previously stated, one of the ingredients that have been used for this product is Tyrosine.

Evidence has shown that Tyrosine represents an amino acid used by the cell in the protein synthesis processes. Also, Tyrosine takes part in the production of a neurotransmitter called Dopamine which is a central player in the brain’s punishment and reward system, as well as cognitive, behavioral, mood regulation, working memory and learning processes. Therefore, Tyrosine has been commonly used for attention deficit disorder, anxiety, depression and mood regulation. However, consumption of Tyrosine-based remedies may lead to some unwanted side effects, including heartburn, fatigue, nausea and diarrhea.

Another compound utilized in Memorex IQ and Memory Boost is Bacopa Monnieri, also known under the name of Brahmi. This plant has been used in Ayurvedic medicine since ancient times. Nowadays, its popularity relies on its brain tonic qualities and has been utilized in a large variety of natural supplements. Studies have shown that among its beneficial effects, there are: the ability to increase alertness, recall, memory and focus. Even though this herb is considered to be safe, its use may lead to nausea, fatigue, bowel movements and dry mouth.

Unfortunately, there are no online available customer testimonials. Hence this product cannot be considered effective.

If you want a top-tier nootropic with effective memory ingredients and customer testimonials, you can try Opti Nutra Mind Lab Pro or NooCube. These two nootropics offer memory benefits and more.

Sold at an average price both on manufacturer website as well as other online or offline retailers, Memorex IQ and Memory Boost represents an affordable product. People can purchase it by bottles containing sixty capsules. A bottle is sufficient for twenty days of treatment.

If you want to have a full 30 days worth of tablets, we recommend trying nootropics like Neurozan.

7) How to Take Memorex IQ and Memory Boost

The recommended dosage is 1-2 capsules daily. There are no consumer reviews available online. No side effects, precautions or drug interactions warnings are issued either.

Memorex IQ and Memory Boost is a dietary supplement based on combination of herbs and amino-acids advertised to provide optimal brain performance with direct impact on learning and memory. Consumer reviews lack making it impossible to get patients opinions on effectiveness and potential side effects experienced.

However, given the ingredient list which includes two of the most popular brain function herbs, Ginkgo and Bacopa Monnieri, we are inclined to say the formula will probably work for most consumers. However each patient is different and the effectiveness of a drug depends on more than its ingredients. The ingredients have been associated to side effects and drug interactions may occur, it is therefore our recommendation that you seek specialized advice prior to starting treatment. 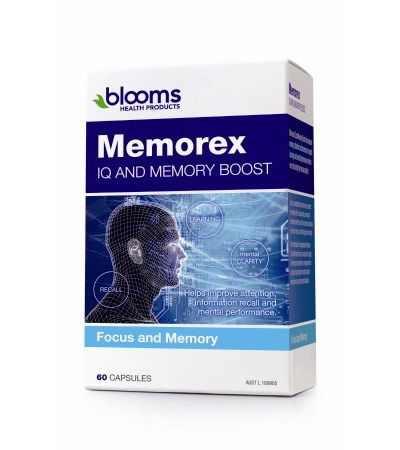 clear
Q:
What are the Memorex IQ and Memory Boost ingredients?
A:

Q:
What is Memorex IQ and Memory Boost supplement?
A:

Memorex is advertised to be a formula that aims to improve mental performance. The company that manufactures this product is called Blooms and is located in Sydney, Australia. Memorex claims to be a natural blend that uses ingredients such as Ginkgo Biloba, Brahmi or Tyrosine, that sustains memory and mood, thus aiding with the prevention of learning and memory disorders as well as attention disorders and offering stress relief.

All in all, Memorex IQ and Memory Boost is marketed as a dietary supplement that has been created through a combination of herbs and amino acids. The manufacturers claim that its main benefits are: improving mental performances, focus, and concentration. Also, this remedy should be capable of regulating mood swings and improving general well-being.

Because there are no online testimonials, it isn't possible to obtain patient opinions on its Effectiveness and potential side-effects. However, it is important to treat this product as a supplement that doesn't replace a healthy lifestyle and combines its treatment with a healthy diet and a good exercising program.

The ingredients of this product are all natural, that’s why it’s one of my favorite formulas, the clarity in memory is unmatched.

Where can I find it?

Where can I find this because I need it for my son whose studying. How do I get it here in Pretoria. Valhalla

Is this medication help for people who have brain damage

I would like to try it despite it not having been proved conclusively. At least it contains natural ingredients.How does one get hold of the products in S.A. Maybe provide me with a company I may order it from.

We did some research and Memorex IQ and Memory Boost was indeed discontinued and the official website is currently down. We don’t know the reasons behind this decision but it might have something to do with a trademark infringement as there are several other similar dietary supplements named “Memorex.”

I think the product will go a long way to improve the IQ’ s of the consumers. Pls how can i get it. I do sometimes have a short memory of recalling things after reading.

Please, Kindly revert back to me if children from age two (2)upward can be administered with this drug. Thanks.

According to the product label, Memorex IQ is only recommended for adults. You should request the opinion of a pediatrician before considering giving this dietary supplement to children.

My thought is that. It’s a good thing that knowledge is increasing. I hope that it will reflect on humanity.

Is Memorex IQ and memory boost now in Nigeria?

Memorex IQ and Memory Boost is no longer available. This dietary supplement was discontinued. If you are still interested in a brain supplement for memory, focus, attention, and overall better cognitive skills, you can check some of the top brain supplements we have reviewed so far.

I am a Nigerian. I live in Nigeria. My aged father has Alzheimer disease. I think we need Memorex IQ and Memory boost if you have it around Nigeria. We need it, pls, kindly reply our message to enable us get the product.

How long does memorex takes to start working. I know each individual is different .