Brain & Memory Boost is a dietary supplement designed to help people achieve maximum cognitive performance by using this blend of 9 active ingredients. The manufacturer of this supplement is called A1 Vitality, but we couldn’t find the company’s official site so we don’t have any information about their activity, history, or line of products.

This particular formula is advertised to promote optimal memory, focus and alertness, and to support emotional balance by lowering stress levels. It looks like the formula also comes with 100% money-back guarantee, but we’re not sure under what terms. We advise our readers to read the retailer’s policy before making the purchase in order to avoid any unpleasant surprise.

The product may also contain traces of milk, soy, shellfish, wheat, or nuts, so people with known allergies to any of these products should use the formula with precaution. According to the label, Brain & Memory Boost has also been tested against common bacteria like Salmonella, E.coli, Staphylococcus aureus, mold, and yeast. A Certificate of Analysis proves that the amounts of each active ingredient are respected and that the formula lacks the contaminants enumerated above.

1) Brain & Memory Boost at a Glance

As stated before the formula includes several active substances (a total of nine compounds) that work together towards promoting optimal mental performance in their users..
Ginkgo Biloba is the first listed ingredient, and this is probably one of the most popular ingredients in nutritional supplements at this time. Many scientists have researched the plant extract and discovered that Ginkgo is a potent natural blood thinner with potential benefits on the circulatory system and the brain. Ginkgo extracts are used to treat memory related conditions such as Alzheimer’s disease, an incurable illness that affects the memory of older individuals and eventually leads to death. The antioxidant benefits of the extract are believed to be the key to reducing Alzheimer’s disease progression and even prevent it. Studies are numerous, but at this time it is not fully understood how Ginkgo affects the brain’s chemistry.

While the ingredients in the formula are backed by science when it comes to brain boosting and memory enhancement, it’s better if we can have some transparency regarding dosages. For this, we recommend checking out our Brainol review.

The first listed ingredient is the popular plant extract Ginkgo Biloba included here as 24% extract. Ginkgo is in fact a very old tree species that survived until today. The extract is considered one of the most effective natural remedies against many conditions. Some of the illnesses it has been used for are: asthma, lung diseases like tuberculosis or bronchitis, and skin problems. Today, the extract is sold as a solution for those who suffer from circulatory problems or are interested in improving cognitive function and preventing age-related memory decline. Ginkgo Biloba works by improving blood circulation within the vessels and it is used as a blood thinner. By doing this, the amount of blood that circulates throughout the body increases, also improving the Oxygen flow. The brain’s oxygenation is very important for maintaining optimal cognitive function, so Ginkgo is prescribed and recommended as a brain boosting supplement. The brain related benefits also result from its antioxidant qualities which make it an effective solution against free radicals. The latter are harmful substances that build up with age and are considered a cause of neurodegenerative conditions like Alzheimer’s or Parkinson’s disease, and memory problems.

N-Acetyl-L Carnitine is another Nootropic substance widely researched for its potential health benefits. The compound is believed to possess important antioxidant properties as it supports production of Glutathione, a free radical scavenger within cells. ALCAR can also boost mental and physical energy, making it an ideal supplement for those who lead active lives or need their brain to function at peak performance. The chemical is currently used to treat memory problems associated with aging.

5) What You Need to Know Before Taking Brain & Memory Boost

Brain & Memory Boost is currently sold on Amazon.com for $24.97. The formula is on sale. Its initial cost was $59.99. One bottle contains the equivalent of 1-2 month’s supply (60 capsules). A money-back guarantee is also available, but we advise potential buyers to make a more in-depth research regarding the terms & conditions of the refund policy.

7) How to Use Brain & Memory Boost

Another important and popular active substance is Phosphatidylserine, also a herbal extract. The phospholipid is naturally produced within the human body. Supplemental Phosphatidylserine becomes necessary when the body is deficient in this substance or when we’re not getting enough of the chemical from our diets. Phosphatidylserine is a key component of cell membranes, including in brain cell membranes. The levels of this essential nutrient decreases by age and it has been shown that without proper levels of this substance, the brain’s performance is impaired which can lead to memory problems and reduced thinking abilities.

The formula isn’t something we haven’t seen before. In fact there’s at least several other supplements reviewed on this site with the exact list of ingredients (the quantities may differ) and available at this time on the nutraceuticals market. There is no scientific evidence to support the supplement’s benefit claims, although individually, the active compounds have shown good results in clinical trials (animal or human).

Also be aware that some of the active ingredients have been associated with side-effects like the risk of bleeding and seizure (in the case of Ginkgo Biloba) or photosensitivity and skin irritations (in the case of St John’s Wort). This being said, the formula benefits of the consumer support who claim to have experienced the benefits attributed to the combination. 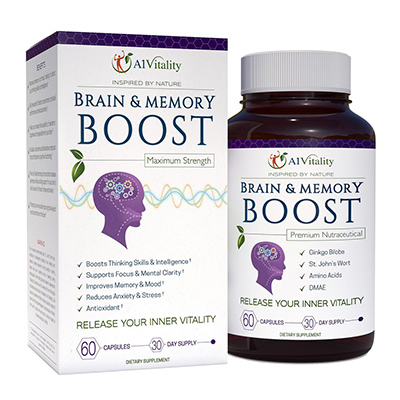 clear
Q:
What are the core ingredients in Brain & Memory Boost?
A:

Q:
Brain & Memory Boost is all about what?
A:

A1 Vitality Brain & Memory Boost is a dietary supplement that claims to improve brain function and generally support optimal cognitive performance. The formula is produced under the A1 Vitality label, but there is little to no information about the manufacturing company. We were not able to find an official site or a reliable source that could provide any of the information we were interested in (location of the manufacturing facilities, raw materials information, company history, etc.).

This supplement is based on a blend of 9 ingredients including some very popular herbs like Ginkgo Biloba, St. John's Wort, Vinpocetine, Bacopa Monnieri, and Huperzine. The formula also includes Phosphatidylserine, an important nutrient for the brain shown to help maintain optimal cognitive function. Acetyl-L-Carnitine, another active substance is believed to have a potent antioxidant effect that prevents free radicals from building up and causing brain damage.

However, the formula as a whole has not been clinically researched, hence we recommend seeking medical advice before starting to use such a product.

A1 Vitality Brain & Memory Boost consists of 9 active ingredients traditionally used within this type of supplements. They have all been clinically studied as potential treatments for various brain related conditions, but at this time the results in most of the cases cannot offer conclusive evidence as to their effectiveness in this field. More so, the entire formula is not the subject of scientific studies, so it is possible to cause some unwanted side-effects as result of the interactions between the active ingredients. All in all, we notice that the supplement has received very good reviews so far. Consumers noticed improved alertness, reduced brain fogginess, and enhanced memory after using the formula.