Shaklee Memory Optimizer is a proprietary formula manufactured by Shaklee Corporation. The product advertises 2 main benefits: it improves the memory function and the ability to learn new information.

The manufacturer is Shaklee Corporation, a company which started out over 50 years ago in the United States to become the global business it represents today. The company’s mission is to make products that are naturally safe and proven effective.

Vinpocentine (an extract from the periwinkle plant) is reported to have cerebral blood-flow enhancing effects, to enhance glucose utilization and increase oxygen uptake to the brain. The plant is used on a large scale Eastern Europe and Japan for the treatment of cerebro-vascular disorders and age-related memory impairment.

Bacopa monnieri was the subject of clinical tests which showed its properties in improving memory and increasing the ability to learn new information. Polygala tenuifolia is one of the Chinese medicine fundamental herbs. Medical trials have shown it to produce memory enhancing effects and in improving cognitive function in elderly people.

3) Is Shaklee Memory Optimizer Right for You?

Shaklee Memory Optimizer is an herbal product claimed to have the right ingredients to help improve overall brain function and to ensure a better memory. However, the full list of ingredients is not disclosed. We find this to be a negative approach. It is perfectly understandable for a manufacturer to protect its formulation, but in the end, the only one who will suffer is the consumer. Each buyer has the right to know exactly what he purchases.

The ingredients found in Shaklee Memory Optimizer have been promoted heavily in many brain supplement products. Evidence suggests that Bacopa Monnieri and Vinpocetine are useful in supporting cognitive function and improve the memory. One the other hand, several recent studies seem to “negate” that Effectiveness. The overall results still are inconclusive due to the many involved variables.

There is little information on this formula, which is always concerning. We were unable to find enough testimonials to support the Effectiveness of Shaklee Memory Optimizer.

5) Precautions of Shaklee Memory Optimizer Use

Shaklee Memory Optimizer is a fairly expensive supplement. Each bottle contains 60 capsules, which should be enough for one month of treatment for the average user.

If you choose to purchase Shaklee Memory Optimizer directly from the manufacturer, the company will offer a discount for members.

The daily dosage is 2 capsules taken with or between meals. The maximum dosage is 4 capsules in 24 hours. Pregnant and nursing women are required to consult a doctor prior to starting treatment with Shaklee Memory Optimizer. Patients who take blood-thinning medication should also see a doctor before starting treatment.

Although the manufacturer does not provide any scientific research to support the benefit claims for the formula, the ingredients have been shown effective in various clinical trials. Also, no side effect are mentioned by the manufacturer.

A standard guarantee is available for most of the company’s products, including Shaklee Memory Optimizer. However, this is a rather restrictive policy, in the sense that the company will exchange the product for other Shaklee products of equal or lesser value, and not compensate the customer in cash. The return order must be requested within 90 days. 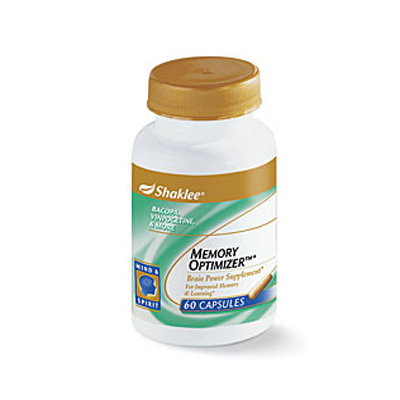 clear
Q:
What are the Shaklee Memory Optimizer ingredients?
A:

Q:
Shaklee Memory Optimizer is all about what?
A:

Shaklee Memory Optimizer is advertised as a highly effective supplement, but there is a lack of evidence to support these claims.

The formula appears to contain the right ingredients (at least those that are disclosed), but the Effectiveness of the overall formula is just as important as the quality of the ingredients.

We always recommend our readers to focus on products that have been fully researched via numerous clinical trials and studies. We also recommend seeking supplements that are accompanied by a free trial sample for testing.