Memory Pro Review – Is it Effective?

Memory Pro is marketed as a broad spectrum memory support formula. According to Pure Encapsulations, the company which manufactures the formula, the supplement works by providing support for memory through a number of different mechanisms: some ingredients promote healthy acetylcholine levels and neuron cell function, while others offer healthy cerebral vascular blood flow and antioxidant protection.

Memory Pro is a combination of herbal standardized extracts, amino-acids and other nutrients designed to promote healthy memory function.

Acetyl L-Carnitine is an amino acid believed to increase the amount of L-Carnitine in the body. L Carnitine plays an essential role in energy production and has powerful anti-oxidant properties. Preliminary evidence shown that Acetyl-L-Carnitine might help slow down the progression of Alzheimer’s (due to its antioxidant properties), relieve depression related to senility and other forms of dementia and improve memory in the older patients. It is considered safe for most adults. However side effects such as stomach upset, nausea and restlessness have been reported.

Memory Pro uses a standardized extract of Bacopa Monnieri, a plant traditionally used for thousands of years for its brain tonic qualities. Modern research revealed Bacopa it has the ability to increase mental alertness, focus, recall and memory and to promote mental relaxation.

Curcumin is found in the Turmeric Root extract, a plant also used in traditional Ayurvedic medicine. Curcumin has shown antioxidant, antitumor, anti-arthritic and anti-inflammatory properties, especially in animal tests and in several in vitro tests. Its beneficial impact has been observed in osteoarthritis, rheumatoid arthritis, heart failure, colitis, high cholesterol, stomach ulcers and viral infections. Also its potential impact on Alzheimer’s disease is the topic of research. Side effects may include rashes, hives and diarrhea.

3) Is Memory Pro Right for You?

Acetyl L-Carnitine is an essential amino acid that helps the body turn fat into energy. It is most popular among body builders. Acetyl L-Carnitine also possesses antioxidant features thus liberating the body of free radicals which in part reduces the number of damaged cells. Studies suggest that Acetyl L-Carnitine might help when dealing with Alzheimer’s disease and memory impairment, however, when it was put to the test in larger and better-designed studies, it was found ineffective.

Bacopa Monnieri is an Indian herb mostly used in Ayurvedic medicine. Research suggests that it might have a positive effect on increasing memory and concentration. Although it was used for thousands of years in India as an ayurvedic herbal treatment for enhancing clear thinking and other mental functions, it started to the become increasingly popular in the last few years in the rest of the world. Studies show that Bacopa might have a protective role in the synaptic functions in the hippocampus.

Phosphatidylserine supposedly has a rejuvenating effect on the brain. It acts by increasing vigilance and attention, improve mood, intensify mental acuity and relieve depression regardless of age. Apparently, it works by enabling the brain cells to metabolize glucose thus releasing and binding with neurotransmitters and improving memory.

Vinpocetine seemed like a promising alternative for seniors experiencing age-related memory loss, however, the clinical trials that tried to prove its Effectiveness were rendered inconclusive.

Tumeric has been used for over 4000 years to treat various illnesses including cancers, infections, problems related to the digestive system and to reduce inflammation. Some studies revealed its antioxidant ability although most of them took place in test tubes and on animals, thus making this information not certain for humans. Also, most studies got conflicting evidence. However, turmeric has been used in both Chinese and Ayurvedic medicine for centuries to treat skin conditions, inflammations, liver problems, and wounds.

Ginkgo Biloba has also been used for quite an extended period in Eastern Asia and is widely touted as a “brain herb.” Studies trying to prove its efficacy regarding memory enhancement has gotten contradicting results, thus rendering them inconclusive. Some scientists argue that its blood thinning ability helps the brain receive oxygen in higher quantities and that this helps improve memory, while others state that in clinical trials there has been no difference between individuals taking ginkgo supplements and those that were on the placebo.

5) Precautions of Memory Pro Use

6) How Much Does Memory Pro Cost?

Memory Pro 60 is a rather expensive supplement sold in bottles of 60 capsules. If the recommended daily dosage is not exceeded, a bottle should last two weeks to 1 month. The product can be purchased from the manufacturer’s website or from other online retailers.

The recommended dosage is 3-6 capsules daily, in divided doses, with or between meals. Certain ingredients may cause gastrointestinal upset, mild headache or fatigue. The manufacturer warns that certain ingredients may be contraindicated with blood thinning medication and particularly mentions Phosphatidylserine as interacting with acetylcholinesterase inhibitors, anticholinergic or cholinergic medications.

Memory Pro is a dietary supplement based on combination of herbs and amino-acids advertised to provide memory support. Unlike many products similar in benefit claims and ingredient combination, Memory Pro’s manufacturer offers extensive information on potential side effects, drug interactions associated to the main ingredients and special precautions regarding certain categories of patients.

This gives the formula credibility and the consumer confidence to have access to all these details. Although there are no consumer reviews available to assess the degree to which the formula delivers on its benefit promises, we are inclined to believe the product will produce beneficial effects for some consumers.

Still, we strongly advise you to also ask the opinion of a healthcare provider prior to use. 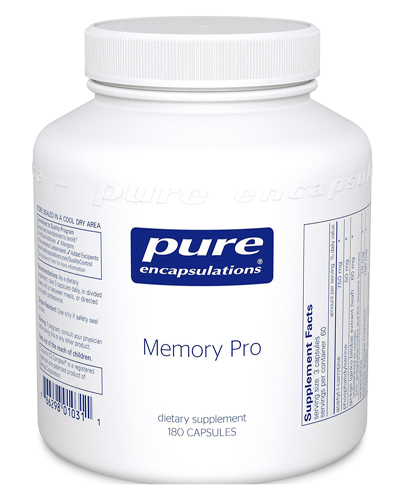 clear
Q:
What are the active ingredients in Memory Pro?
A:

Q:
Memory Pro is all about what?
A:

Memory Pro 60 Capsules is a dietary supplement intended to promote neural health, cognitive function and memory. Memory Pro is offered to you by Pure Encapsulations. One of the active ingredients of Memory Pro is Acetyl-l-carnitine, used as an acetyl donor to support healthy levels of acetylcholine, a key neurotransmitter in the brain. Another active ingredient of this product is Phosphatidylserine, which is an important cell membrane component, critical for neuron function and communication. Memory Pro also contains Ginkgo biloba and Vinpocetine, both used to promote cerebral blood flow, vascular integrity and healthy red blood cell. It is recommended to take 2-4 capsules daily, in divided doses, with or between meals. Keep in mind that this not intended to diagnose, treat cure, or prevent any diseases and is not FDA approved, so if you are pregnant or nursing you should consult your physicist about it.

Although the ingredients in Memory Pro 60's formula are mostly present in many other supplements and most consumers of supplements based on those ingredients seemed satisfied with the results they achieved by usage, the research trying to prove their Effectiveness has mostly been proven inconclusive. Memory Pro 60 seems like a good alternative for other more powerful drugs. However, no information has been made available to guarantee its efficacy.