Memory and Brain with Acetyl L-Carnitine is a dietary supplement designed to provide comprehensive nutritional support for the brain so as to naturally support memory and overall cognitive and mental functioning.The formula is manufactured by ProCaps Laboratories, which was founded by Andrew Lessman. The company has been in the business of manufacturing and distributing nutritional supplements since 1979. They are specialized in providing natural, addiction-free vitamins and supplements designed to promote a general well-being and optimum health.

This supplement is a comprehensive formula containing natural compounds and nutrients. The main active ingredient is Acetyl L-Carnitine (ALC), a substance known for its benefits on memory and cognitive function and well as for its essential function in the biosynthesis of the neurotransmitter Acetylcholine.

Memory and Brain with Acetyl L-Carnitine is designed for individuals who experience cognitive decline caused by aging, but can also be used by anybody who finds it challenging in memorizing and recalling information. This supplement is not recommended for pregnant and lactating women, children or people taking anticoagulant drugs.

Memory and Brain with Acetyl L-Carnitine is nutritional supplement based on a mixture of amino acids, vitamins and herbal extracts.

Acetyl L-Carnitine is the acetylated form of Acetyl Carnitine. Its main function is to transport fatty acids into the mitochondria of the cell, for the production of energy. Studies have shown positive effects on cognitive function and nerve related conditions. However the evidence is still insufficient and further research is needed to establish the extents of Acetyl Carnitine supplements benefits and side-effects.

The formula’s comprehensive list of vitamins, minerals and herbal extracts which work together to reduce the negative impact of aging on mental acuity, retention, concentration and memory is impressive. For instance Bacopa Monnieri and Turmeric (Curcumin) are two powerful herbal ingredients with a long history of use that can be traced back to the Ayurvedic (Indian) Medicine. They offer targeted protection to the delicate tissues of the brain and are the topic of numerous research studies regarding their abilities to combat the normal age-related changes in mental function.

3) What Does Memory and Brain with Acetyl L-Carnitine Do?

Recent studies have shown that Acetyl L-Carnitine might have a beneficial effect on the performance of brain in general and on memory in particular. Normally, the required quantity of the substance is delivered to the body naturally through the liver and kidneys; however, some individuals might not produce enough of this nutrient, thus the need for supplementation. Acetyl L-Carnitine also acts as an antioxidant. Antioxidants work against harmful free radicals, helping eliminate them from the brain and body.

Ginkgo Biloba is a herb used in traditional medicine of Asia, mostly in China. The Ginkgo Biloba is the national tree of China. Because of its blood-thinning abilities, this herb promotes a healthy cardiovascular system. Through a good circulatory system, the brain and the body cells get more oxygen, thus improving brain functions such as memory, concentration, and retention. Certain side effects are associated to Ginkgo Biloba, including the risk of bleeding, dizziness, headache, and allergic skin reactions.

Ginseng is a traditional herb, a central element of Asian medicine. Historically speaking, it was used when dealing with sexual dysfunctions and type II diabetes and for its aphrodisiac properties. Some research suggests that ginseng is an adaptogen and might be useful in cases of respiratory illnesses, fatigue in cancer patients and influenza. Tests made on animals show that this herb might also have beneficial effects on cancer. However, extensive research is needed to prove ginseng’s Effectiveness regarding these matters.

No side effects are mentioned about the formula, however, many of the core ingredients may determine certain unwanted effects.

4) Memory and Brain with Acetyl L-Carnitine: Pros and Cons

6) How Much Does Memory and Brain with Acetyl L-Carnitine Cost?

Memory and Brain with Acetyl L-Carnitine are sold in bottles containing 30 capsules. At the time of this review, the manufacturer offers free shipping for all orders made in the United States. Additional discounts are offered for volume purchases (5% for two bottles, 10% for three bottles, etc.) and for selecting the auto ship option which brings you an extra 10% discount applied to the purchase price. The product is available on the manufacturer’s website at an affordable price. If the recommended dosage is not exceeded, a bottle is designed to last for about a month’s use. Other online retailers might also offer discounts and promotions.

Consumers generally report good results when using Memory and Brain with Acetyl L-Carnitine, although scientific evidence of its effectiveness does not exist. The suggested dose is two capsules per day preferably with a meal or as recommended by a healthcare professional. No side effects are mentioned in relation to the supplement.

8) Our Verdict on Memory and Brain with Acetyl L-Carnitine

Memory and Brain with Acetyl L-Carnitine is marketed as the most comprehensive formula offered by Andrew Lessman for the support of optimal brain function and memory related processes (concentration, information retention efficiency and recall).

It combines the multiple benefits of minerals (Magnesium), vitamins (B complex vitamins, vitamin D3 and vitamin C), amino acids (ALC) and herbal extracts (Bacopa Monnieri, Ginkgo Biloba and Panax Ginseng, traditionally used in the treatment of brain related conditions). Consumers report increased memory capacity and focus. No side effects are reported by the consumers, however some of the ingredients may cause harmful side effects and may interfere with various other medication. All in all this appears to be a good choice for a memory support; however, as with all dietary supplements, it is always recommended to consult a healthcare professional so that you decide if Memory and Brain with Acetyl L-Carnitine is right for your particular needs. 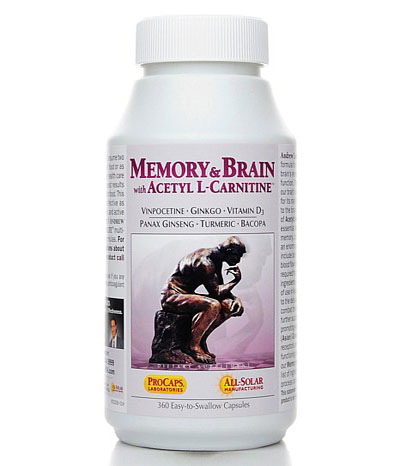 Common Memory and Brain with Acetyl L-Carnitine Questions and Answers

clear
Q:
What are the core ingredients in Memory and Brain with Acetyl L-Carnitine?
A:

Q:
What is Memory and Brain with Acetyl L-Carnitine supplement?
A:

Q:
Does Memory and Brain with Acetyl L-Carnitine work?
A:

As most memory supplements, this supplement contains in its formula ingredients that are known for their therapeutic effects on the brain and cognitive performance. However, no information was made available about the clinical trials conducted on the supplement being revised; therefore the product's Effectiveness cannot be guaranteed. Still, this is a frequent issue of dietary supplements, which neither have FDA approval nor are they independently tested to support their benefit claims. Some of the core ingredients may trigger unwanted side effects, which result from their combination or stream from their presence in the formula alone.

this looks good and all, but try reading the ingredients…. I mean, vitamins are good, but 3 times the required dosage?! or 16 times?! It really has some high dosages of vitamins and who knows what effects it could have if taken long term.