MemoRise Review – 8 Things You May Not Know

MemoRise is advertised as an herbal formula designed to support brain health and to reduce common age related memory loss and forgetfulness. The formula works through two main action mechanisms: one, to support the nervous system by maintaining the natural flow of blood through arteries and two, to maintain a healthy vascular circulation and oxygen-rich blood flow in the body.

MemoRise is a 100% herbal formula of three plants mixed in precise therapeutic dosages. The three plants are Maidenhair tree, Rosemary and Sage.

Maidenhair tree is the less frequently used name (old popular name) of Ginkgo Biloba. Ginkgo is one of the best selling herbal supplements today; most commonly used for its blood flow enhancing and memory improvement properties. Emerging evidence suggests that it may be particularly effective in treating ailments associated with decreased blood flow to the brain, such as memory loss, particularly in elderly individuals. However, a number of clinical tests of Ginkgo’s effectiveness in Alzheimer’s treatment classified it as either ineffective or result were controversial. Ginkgo is also associated to a number of side effects and is known to interact with several drugs.

Sage (Salvia Officinalis) is used to treat a wide spectrum of health conditions, from memory problems to heartburn and gastritis. Several clinical trials concluded that Sage is able to improve cognitive function in young adults, although large scale applicability is required. This particular species of sage, the Salvia Officinalis contains a chemical called thujone that can trigger seizures.

3) Does MemoRise Work and it is Safe?

Promoted as a one hundred percent natural formula, MemoRise is based on a combination of three plants found in precise therapeutic dosages. One of these herb extracts is Maidenhair tree, the less frequently utilized name for Ginkgo Biloba. Research has shown that Ginkgo Biloba is one of the best sold herbal supplements nowadays and has been used for its memory enhancing properties and improvement of blood flow in the human body. Some evidence suggests that it may prove specifically effective when it comes to treating ailments that are associated with low blood flow in the brain, such as memory loss and Alzheimer’s. On the other hand, a variety of clinical tests classifies Ginkgo Biloba as ineffective in treating symptoms related to Alzheimer’s disease. Consumption of Ginkgo Biloba based supplements is associated with some unwanted side effects, and it can interact with prescription drugs.

Another component of this remedy is Salvia Officinalis, a species of sage. This plant has been used to treat a vast spectrum of health problems, from heartburn and gastritis to memory problems. Some clinical studies have revealed the properties of this herb related to the improvement of cognitive functions in young adults, but further research is required. Because this plant contains a chemical called thujone, it can trigger seizures.

Recommended daily dosage is two to four capsules per day, after meals and with water.

Unfortunately, there are no online testimonials about MemoRise. Thus its Effectiveness is currently unspecified.

MemoRise can be bought by bottles that contain 60 vegetarian and lactose-free capsules which are suitable for everybody who desires to try this treatment. Its price is moderate and considered affordable when bought in larger quantities, due to the discounts and special promotions.

Caution is advised for pregnant and nursing women or those who have a history of seizures.Consumer testimonials are exclusively available on the manufacturer’s website, but these should be treated with caution. The recommended dose of MemoRise is 2 capsules taken 2 times a day. According to the manufacturer this is a 100% safe, non-addictive formula, and no testimonials to argue this statement were found.

8) Our Final Take On MemoRise

MemoRise is designed as a 100% safe and non addictive natural remedy against age related memory impairment and associated symptoms: forgetfulness and absentmindedness. The formula is a simple blend of 3 herbs; therefore the probability of interactions and resulting side effects diminishes. All three ingredients have been extensively researched and proven effective to a certain extent.

Still, no independent consumer reviews could be identified. Consumer testimonials on the manufacturer’s website may be a marketing tool and should be treated with caution.

Our readers should be aware that the ingredients may contain certain chemicals which determine side effects or unpleasant adverse effects. For instance, the thujone contained by the Sage can trigger seizures. We therefore recommend caution and advise you to seek a physician’s advice before use. 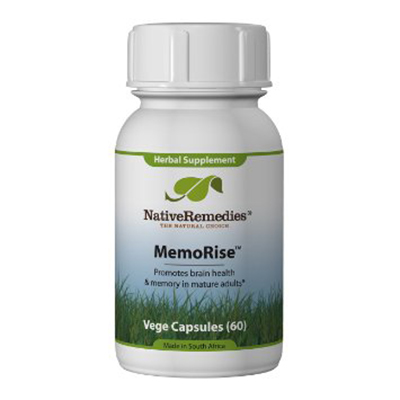 clear
Q:
What does MemoRise contain?
A:

Q:
What is MemoRise supplement?
A:

MemoRise is a formula that claims to offer support for mental health. The company that manufactures this product is called Native Remedies and is situated in Florida, United States. MemoRise is an herbal dietary supplement that uses ingredients such as DHA, Gotu Kola or Ginkgo Biloba in order to aid with the necessary energy production, as well as offer support for the cognitive function of the brain, thus aiming to maintain a good brain health.

Q:
Does MemoRise work?
A:

MemoRise represents another dietary supplement designed to improve cognitive functions by enhancing blood flow to the brain. It contains three plants with individual known properties that have been previously used in similar remedies. On the other hand, this particular combination may trigger some side effects if the label dosage is exceeded, case in which people should immediately stop the treatment. This product is recommended for people of all ages and can even be suitable for vegans.

Because it represents only a supplement, to obtain desired results, it should be taken alongside a healthy diet and a good exercising program.