Memory Formula is a combination of two herbal extracts: Bacopa Monnieri (or Bacopa) and Centella Asiatica (or Gotu Kola). In Sanskrit language, they are both known as Brahmi. The two plants have been used for centuries in creating remedies of Ayurvedic origin.

The manufacturer of the formula runs its operations from India and owns GMP certified facilities. The company takes pride in the fact that it obtains kosher certification for the majority of their products. The company was founded in the 1990’s and currently markets certified organic, bio-dynamic and ethically wild-crafted products throughout India, the United States, Israel, the United Kingdom, the Czech Republic, Japan and Australia.

Memory Formula is designed to help adults who wish to obtain superior performance in cognitive performance, energy levels, as well as a number of secondary directions such as cardiovascular health, or blood and nervous system detoxification.

Memory Formula is a blend of two herbal ingredients, Gotu Kola and Bacopa Monnieri, two Brahmis as they are known to the Ayurvedic medicine practitioners. The plants have powerful adaptogenic properties, particularly they help the body naturally adapt and respond to stress.The two herbs uses go beyond their adaptogenic properties though, as they have been traditionally used in treating cardiovascular problems, restore energy levels and as detoxification of blood and nerves remedies.

Modern research even goes to suggest that Bacopa Monnieri may protect brain cells from chemicals which cause cognitive decline such as Alzheimer’s disease.Both plants are also known as powerful anti-oxidants, due to the phenols in their composition (approximately 10%). Hence, they help cognitive function and promote mental clarity. Modern research for example indicates that one of Gotu Kola’s active ingredients, called Triterpenoids, take part in the transmission process of nerve signals in the brain, hence improving the function of the central nervous system, without over-stimulating it.
Side effects, although not mentioned as such by the manufacturer, include fatigue, drowsiness, stomach upset and nausea.

3) Is Memory Formula Right for You?

Both Brahmi and Gotu Kola are known “medhya rasayanas,” meaning they are of the world’s most powerful cognitive function adaptogenic herbs. They are neuroprotective, helping replenish and nourish the nervous system while positively interacting with the adrenergic, dopaminergic and serotonergic systems. It is said that they prevent accumulation of lipid and protein related damage and promote increased circulation to the brain and enhanced energy without stimulating the adrenals.

Brahmi or Bacopa monnieri is has been reported to be used in a traditional Ayurvedic treatment for epilepsy and asthma. Laboratory studies on rats indicate that extracts of this plant improve memory capacity. The sulfhydryl and polyphenol components of Bacopa have also shown to impact the oxidative stress cascade by scavenging reactive oxygen species, inhibiting lipoxygenase activity and reducing divalent metals. This mechanism of action may explain the effect it has in reducing beta-amyloid deposits in mice with Alzheimer’s disease. In a randomized clinical trial of 98 healthy people, this herb significantly improved memory acquisition and retention.

Gotu Kola is a mild adaptogen. It is mildly antibacterial, antiviral, anti-inflammatory, anti-ulcerogenic, anxiolytic, nervine and vulnerary, and can act as a cerebral tonic and as a circulatory stimulant. This herb may be useful in the treatment of anxiety and may be a promising anxiolytic agent in the future. Several scientific reports have documented Gotu Kola’s ability to aid in wound healing. Also, preliminary evidence suggests that it may have nootropic effects.

The daily dosage as recommended by the manufacturer is of 2-3 capsules taken 2-3 times per day.

There are testimonials posted online about Memory Formula. What is being said includes:

4) What Memory Formula Does?

Memory Formula is currently being sold at an affordable price in bottles containing 90 veggie-caps. At a daily dose of 6 to 9 capsules per day, one bottle should last somewhere between 10 to 15 days. A month’s supply can be covered by 2 or 3 bottles, which brings the cost at a moderate level. The fact that multiple bottles can ensure the monthly supply might be an inconvenience for some people. This product is available for purchase directly on the manufacturer’s website or from other online retailers.

7) How to Take Memory Formula

Online consumer testimonials are not available unfortunately; therefore an evaluation of the formula’s effectiveness is not possible at this point. The recommended daily dose of Memory Formula is 1-2 capsules taken with food and water 2 times a day, or as directed by a health care practitioner.

8) Our Final Take On Memory Formula

Memory Formula blends in two Brahmis (Bacopa Monnieri and Gotu Kola) in a formula claimed to improve mental clarity and memory and to support and nourish the brain and nervous system. The manufacturer argues that the plants have been used for many millennia as remedies against cognitive decline, cardiovascular conditions and as cleansing formulas.

The formula reviewed here uses certified organic ingredients, wild-harvested in remote spring fed forests or grown on the company’s own farm irrigated by spring water, hence the potency and efficiency or the formula are ensured. However, in the absence of any consumer testimonials, it is hard for us to assess its effectiveness in the promoted benefit areas. Moreover, due to the fact that both Bacopa and Gotu Kola may cause side effects, it is recommended that you ask a medical opinion before beginning treatment. 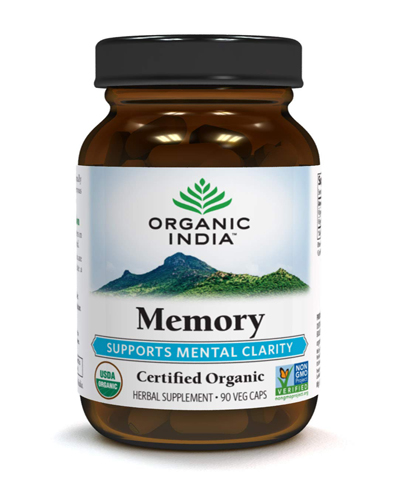 clear
Q:
What does Memory Formula contain?
A:

Q:
What is Memory Formula supplement?
A:

Memory Formula is presented as an herbal blend aiming to aid in circulation, brain performance (memory and focus in particular), blood cleansing and general well-being. The supplement is brought to you by Organic India. The active ingredients of this products are Bacopa Monnieri and Gotu Kola, traditional Indian plants known for their effective results against a number of conditions. They are potent adaptogens, meaning they help the body cope with stressful situations ensuring an optimum response. Also, they feature potent antioxidants, hence their concentration, memory and mental clarity boosting effects. The herbs also work to help cleanse and detoxify the blood and the nervous system, while at the same time increasing energy levels. Memory Formulais Kosher and Halal certified, GMO and gluten free and vegetarian.

Memory Formula is a supplement intended to enhance memory, focus, and attention by ensuring optimum flow of blood to the brain. This supplement is claimed to be all herbal, thus being suitable for vegetarians. The manufacturer claims that their product has been proven to be effective in nourishing the brain and the entire nervous system by increasing blood circulation to the brain, however, no information regarding studies on this product's efficacy has been made available. The fact that the official presentation offers detailed information on potential benefits, dosage, usage instructions, etc. is a big plus for the formula. Still, you should check with your healthcare provider before starting use.

This is incredible! I am more energetic and stress-free than ever before. For me, this works great, I started feeling better even since the first week of use.

I am a big fan of herbal medicine and when my memory started getting worse, I found this Memory Formula. I has been useful, I’ve been using it for many years now. Some of my family members have also taken my advice and starting using it with similar results – we’re feeling healthier and happier.