Memory Zest Tea is a tea formulation designed to support mental sharpness and clarity and enhance retention capacity and memory. The herbal mixture is manufactured by Mountain Rose Herbs, a company founded in 1987. The company is committed to providing fresh and natural herbal products in the spectrum of teas, tinctures, essential oils, aromatherapy formulas, cosmetics, personal care products, capsules, products for pets, etc.

The tea infusion contains herbs which have been traditionally used for mental performance benefits, including Ginkgo Biloba, red Clover, Stevia, Ginger and Peppermint. The plants included are claimed to be organically grown, and the product is certified organic. The formula is also Kosher certified and caffeine free. Memory Zest Tea is recommended for the use of adults as a tea infusion.

1) Memory Zest Tea at a Glance

Memory Zest Tea is an herbal blend designed to be used as a tea infusion.The most important ingredient in the formula is the leaf of Ginkgo Biloba, one of the most used herbal remedies for memory. The plant contains more than 40 active substances, among which two are accounted for the plants therapeutic properties: ginkgo-flavone glycosides and terpene lactones. These two active components have been touted for blood enhancing and antioxidant properties.

Scientific research has been conducted for most of these assumed benefits, although not for all a conclusion has been reached. Ginkgo Biloba stimulates blood circulation, including peripheral and is believed to be beneficial for enhancing memory, alertness, learning capacity and cognitive function in general. It also improves well being and may help relief depressive mood and symptoms of anxiety disorders such as panic attacks or social anxiety. Numerous studies have focused on its benefits in preventing memory and cognitive decline associated to Alzheimer’s disease, mild cognitive impairment or dementia.
The tea infusion obtained from Ginkgo Biloba contains key flavone glycosides and terpenes (particularly Ginkgolides A, B and C). Ginkgo is generally considered safe, although headache, stomach upset, dizziness, constipation, and forceful heartbeat have been sometimes reported.

3) What Does Memory Zest Tea Do?

Memory Zest Tea is an herbal mixture. It contains plants which have been historically used for their brain tonic and cognitive function enhancement properties. Gotu Kola, for instance, is an internationally recognized botanical medicine. It has adaptogenic, anxiolytic, anti-inflammatory, cerebral tonic, diuretic and nervine properties among others. Evidence indicates it can strengthen mental function, and, while research is required to confirm this, it appears that Gotu Kola may have a potential benefit in Alzheimer’s disease and cognitive impairment conditions. Also, the plant’s adaptogenic properties account for possible benefits in managing stress symptoms and promoting a healthy response to physical, environmental, or psychological stress.

It is also held responsible for potential treating ulcers, relieve hemorrhoids and prevent blood clots from forming. Other uses, although not thoroughly studied, refer to potential benefits against anxiety disorders such as social anxiety or panic attacks. Side effects of Gotu Kola have rarely been reported and might include a headache, stomach upset, allergies at skin level, nausea, and dizziness.

Ginkgo Biloba is another critical component, touted for benefits in protecting the brain from memory impairing conditions (Alzheimer’s). Red clover contains isoflavones which are antioxidants that help protect brain cells from neuron damage caused by oxidative stress which may affect memory and thinking, abilities. The manufacturer recommends infusing one teaspoon in 1 cup of boiled water. No side effects or precaution are issued for Memory Zest Tea.

Memory Zest Tea can be purchased in boxes of 4 ounces, 8 ounces, and one pound. The price for the 4 ounces is rough $6, for the 8 ounces is $11, while for 1 pound of Memory Zest Tea you may pay roughly $23. Bulk buying (quantities larger than 5 pounds) is also available. All products offered by Memory Zest Tea are liable to a 60-day money-back guarantee, which ensures a refund of the full purchase price fewer shipment costs (no restocking fees are applicable). The formula is available for purchase on the manufacturer’s website and other retailers.

7) How to Take Memory Zest Tea

There are no online consumer testimonials available on Memory Zest Tea, hence a conclusion on its effectiveness is hard to formulate. The infusion should be obtained using 1 teaspoon herb to 1 cup of boiled water infused for 5 to 15 minutes.

Herbal medicine has been around for thousands of years. Due to the high level of trust it enjoys, herbal medicine is still successful and is being used on a large scale to treat common health problems. The natural way of healing is the treatment of choice for many consumers. Herbal teas are an important component of herbal medicine. Memory Zest Tea promises to enhance memory and mental clarity and precision, in a modern world where mental exhaustion is more likely to happen than physical exhaustion. Unfortunately, there is no evidence of the tea’s effectiveness in these areas, nor are there any consumer reviews to back up the benefit claims. 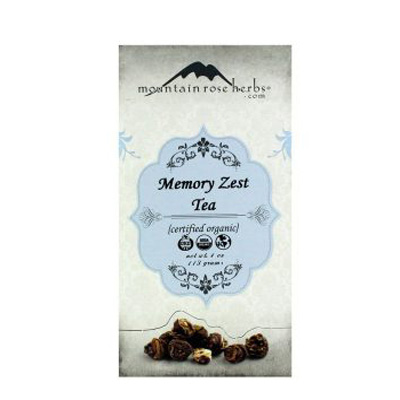 clear
Q:
What are the core ingredients in Memory Zest Tea?
A:

Q:
What is Memory Zest Tea supplement?
A:

Q:
Are Memory Zest Tea benefits actually a reality?
A:

The benefits advertised for Memory Zest Tea are not supported by any scientific evidence or clinical trial results. Also, the fact that there are no consumers testimonials posted online makes it even harder to evaluate the extent of its effectiveness. Herbal teas, however, have been used for various therapeutic purposes for centuries, and there are many believers out there who prefer treating common illnesses with herbal products, including teas. The majority of the main ingredients are very popular herbs linked by scientific evidence to brain function properties; the formula is potent enough to achieve the advertised results, at least partially.

I made a habit out of drinking one cup of Memory Zest Tea every day, after breakfast. I am clear minded all day and I feel more relaxed and able to focus on my tasks.