Phosphatidyl Serine 100 mg with Choline is a non-prescription drug advertised to provide adequate support for the brain, memory, and mood. The formula is created and marketed by Stop Aging Now, a reputable American supplier of nutritional supplements for almost 20 years. The company commercializes a wide range of such products aimed to assist in numerous health concerns (brain and heart conditions, digestive disorders, joints, bones or immunity problems, etc.)

Phosphatidyl Serine 100 mg with Choline is promoted as made with the highest quality Phosphatidyl serine (PS) available on the market, a claim that is not supported by conclusive information of the source or a quality certificate. The main active compound is PS, but the formula is enriched with two more nutrients for synergistic cognitive and anti-stress benefits, namely Inositol and Choline. This product is designed strictly for adults who are not currently under any other medication. These individuals along with pregnant/nursing women are advised to consult a healthcare practitioner before starting administrating the formula.

Like all Stop Aging Now supplements, Phosphatidyl Serine 100 mg with Choline is marketed as processed in a state-of the-art FDA inspected facility located on the US territory. The manufacturer guarantees that all their products are in compliance with the strictest USP standards which makes them superior to common dietary formulations usually produced with low-grade, unsafe raw materials.

1) What is Phosphatidyl Serine 100 mg with Choline?

Phosphatidyl Serine is a naturally occurring substance found in the membranes of most human cells. Its main function is to facilitate communication between these entities and to maintain and build cell membranes. The chemical has also been shown to facilitate brain cell communication (neuro-transmission) allowing important substances like Dopamine and Acetylcholine to be released in the brain which further results in a healthy cognitive function, balanced mood, stress control, and sleeping patterns. The benefits of supplemental PS are considered to be very important, particularly in older individuals, as PS levels have been observed to decline with age. Numerous clinical trials were set out to determine the actual memory benefits of the chemical in people suffering from memory loss, dementia, Alzheimer’s disease, or Parkinson’s disease. Most importantly, it seems like Phosphatidyl Serine has the ability to reverse brain aging considerably by restoring nerve cell growth, cell membranes, and possibly generating new connections between the neurons.

Results so far are very promising, but still insufficient as to recommend PS drugs as stand-alone treatments in these cases.
PS’s antidepressant benefits are also of high importance, as numerous modern disorders usually have stress related underlying causes. Clinical studies have shown significantly lower stress levels in students during finals and more stable moods. The substance is also used in the treatment of mild depression due to its ability to restore and support healthy Dopamine levels in the brain.

Phosphatidyl Serine is a naturally occurring chemical in human body, but it is widely sold as a dietary supplement due to its numerous believed health benefits. The compound is a key component of cell membranes that facilitates communication processes between them well as nutrients transport to and outside cell. Its role in cellular communication particularly in the brain and central nervous system, have increased the popularity of PS as a cognitive enhancer. The number of studies about this chemical conducted so far is also very impressive. Some of the conclusions resulted from this research are that PS may effectively boost physical stamina and athletic performance, improve memory (in older people suffering from mild memory impairment), help reduce depression symptoms, and assist in the treatment of ADHD (particularly when combined with Omega-3 fatty acids).
However, PS supplements may cause digestive problems and sleeplessness particularly when taken in doses over 300 mg per day.

Choline is a chemical that resembles to B-vitamins considered important for its role in the synthesis of an important neurotransmitter called Acetylcholine. This brain nutrient has been shown to promote healthy nerve signaling helping in the maintenance of memory. Choline levels have been shown to decline with age, which makes supplementation even more important. Choline is also important for the brain development in the early stages of life. Studies have shown the importance of this nutrient by revealing that Choline deficient diets of the mothers during pregnancy resulted in lower brain development and poorer memories.
High amounts of natural choline can be assimilated from beef liver, eggs, almonds, peanut butter, or tofu. However, the recommended daily allowance of Choline has not been established. Doses larger than 3.5 g per day are known to cause unwanted side effects like fishy body odor, diarrhea, or low blood pressure.

Phosphatidyl Serine 100 mg with Choline is sold for a moderate monthly price. One bottle contains 60 vegetarian capsules (the monthly dose). Consumers who chose to order multiple bottles (3 or 6) or who sign in the Autoship program benefit of special discounts from the standard price. International delivery is also ensured by the manufacturer, although the shipping taxes for such orders start from relatively high prices. However, the US shipping and handling taxes start from very low values and increase with the value of the order and the chosen shipping service.
The formula does not benefit of a free trial period, but does come with a 1 year money-back guarantee which may be considered as a free trial period.

7) How to Use Phosphatidyl Serine 100 mg with Choline

Inositol is also referred to as Vitamin B8 but it is not in fact a vitamin at all. It is a naturally occurring substance that helps in fat transportation and promotes lean nerve function. It is believed to work synergistically with Choline and provide important antidepressant benefits. The chemical is also commonly used in the treatment of respiratory conditions in babies, cancer treatments, diabetes, and cholesterol problems.

8) Our Verdict on Phosphatidyl Serine 100 mg with Choline

Phosphatidyl Serine 100 mg with Choline from Stop Aging Now is not a unique formulation. In fact, there is currently an identical product offered by one of the competitor sold for a similar monthly price. However, this formula is advertised as superior due to the high quality of the active ingredients and its full compliance with the most rigorous quality, purity, safety and disintegration standards.

All the active nutrients from this formula have been clinically researched. Numerous medical investigations and research papers support PS’s effectiveness in supporting healthy neuro-transmission. However, most of these studies have been made on bovine PS while most of the supplements available on the market at this moment are based on soy based Phosphatidyl Serine (for safety reasons). More importantly, people should be aware of certain drug interactions between the substances from this product and other drugs and always call to a specialized practitioner when in doubt. 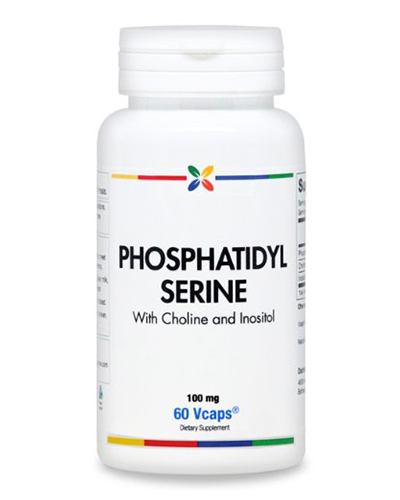 clear
Q:
What are the active ingrediens in Phosphatidyl Serine 100 mg with Choline?
A:

Q:
What is Phosphatidyl Serine 100 mg with Choline?
A:

Phosphatidyl Serine 100 mg with Choline is offered as a high quality brain, memory, and mood support suitable for adults who seek an effective cognitive booster and anti-stress remedy. The manufacturing company is Stop Aging Now, a large American supplier of nutritional supplements.

The formula is advertised as based on the highest quality Phosphatidyl Serine (PS) available. It also features Inositol and Choline, two nutrients added for their synergistic benefits on overall brain function and mental health.

Each of these ingredients has been clinically shown to support healthy nerve communication, help with stress, and promote healthy cognition. PS is considered highly important due to its ability to promote synthesis of some of the most important neurotransmitters: Acetylcholine (that supports healthy memory) and Dopamine (known to act as a natural antidepressant). The suggested dose of Phosphatidyl Serine 100 MG with Choline is 2 capsules per day (200 mg of PS).

Phosphatidyl Serine 100 mg with Choline supplement is sold as a high quality source of PS and is advertised as an effective and safe option for the support of memory and mood balance in adults. The formula is claimed to lack common allergens like eggs, fish, shellfish, gluten, wheat, and tree nuts. It is also a vegan/vegetarian product suitable for those who follow special diets. Such supplements heave been clinically shown to be generally safe and provide the claimed benefits on cognition and mental health. However, the formula itself is not an FDA approved medication, nor is it the subject of any clinical study. Certain concerns regarding the combination of PS and other drugs have been issued, particularly with anticholinergic drugs, Acetylcholinesterase inhibitors (usually prescribed in the treatment of Alzheimer's disease), and Cholinergic drugs. These are the main reasons why it is recommended to consult an informed physician who can correctly evaluate all the risks of using such a supplement and recommend you the safest option.

I love this Phospatidyl Serine supplement because it was very effective in reducing my depression symptoms. I noticed the first improvements from the first week I started to take these capsules, and I have been feeling better each day ever since. I have bought my third bottle and I will continue to use it because this is really an effective product.

Stop Aging Now never cease to amaze me with their wonderful supplements. This is yet another effective brain booster which has made a huge difference for me. My memory is better than ever. I also feel much happier and relaxed since I started to use this product. There is no reason why I should stop taking it!