Total Memory Review – Is it Effective?

The formula contains Synapsa (a patented Bacopa monnieri extract), Huperzine A, and a small amount of Vitamin D3.

According to AZOTH, the company behind Total Memory, the ingredients in this brain supplement are “studied in over 100+ trials” and have proven to be the best cognitive support supplements on the market designed to “work on the first dose.”

1) What is Total Memory?

AZOTH Total Memory is one of the many brain supplements that promise instant, long-lasting results in terms of attention, focus, memory, mental clarity, energy, and overall cognitive support.

But can this simple formulation live up to the claims? Is it indeed proven to work in dozens of clinical trials as claimed by the manufacturer?

Before diving into our AZOTH Total Memory review, let’s see what science says about its core ingredient, Synapsa:

2) The Company Behind Total Memory

Total Memory is made by AZOTH LLC, an American brand founded in August 2017 by Prady Tewari.

The company has had success with an aggressive marketing strategy claiming to produce some of the “strongest nootropics on the market.” Despite its over-the-top claims, the sales have been skyrocketing; AZOTH LLC is currently selling products in over 38 countries.

Some popular nootropic supplements from this company include:

Similar memory supplements like Jarrow Formulas PS 100 Phosphatidylserine use only one ingredient for more potency.

In this next part of our Total Memory review, we will discuss some of the core ingredients included in the formulation, analyzing how these ingredients can benefit your cognitive health.

The standardized extract of Bacopa monnieri known as Synapsa, often called CDRI-08 or KeenMind, is a trademark ingredient developed by the Central Drug Research Institute (CDRI) in India and distributed by PLT Health Solutions.

The CDRI is responsible for most of the clinical research conducted on Synapsa and for a large part of the research available on Bacopa monnieri.

Since, according to CDRI, Synapsa is a consistent and well-represented Bacopa monnieri extract, most scientific research on Bacopa has also been used to support claims on Synapsa.

However, the specifics on the extraction process for Synapsa aren’t entirely clear since most of it is hidden behind its patent.

In terms of benefits, Synapsa Bacopa may support cognitive health and functions related to learning, memory, and intellectual performance.

Huperzine A is a substance obtained from the Chinese club moss (Huperzia serrata), a plant used for centuries in Traditional Chinese Medicine to sharpen memory and reduce inflammation. Sold as a dietary supplement, Huperzine A is commonly used as a treatment[4][5] for Alzheimer’s disease.

Used in alternative medicine, Huperzine A has been discovered to act as a cholinesterase inhibitor, a type of medicine utilized to inhibit the breakdown of acetylcholine (a chemical essential to memory and learning).

Several clinical studies showed that Huperzine A might protect against age-related cognitive decline and enhance memory and learning[6][7][8].

Vitamin D is required for optimal health. Most people get enough Vitamin D from sunlight or foods, but in some cases, supplementation with Vitamin D is also necessary.

If you have too little, you may become weaker, feel extremely tired, have muscle or joint pain, develop eczema, or a skin rash. Depression and high blood pressure are two long-term disorders associated with not getting enough Vitamin D.

Research has shown that Vitamin D3 might play an essential role in regulating mood and warding off depression.

In one study[10], scientists found that people with depression who received Vitamin D supplements noticed an improvement in their symptoms.

In another study[11] of people with fibromyalgia, scientists found that Vitamin D deficiency was more prevalent in those experiencing depression and anxiety.

Given the ingredients available in this brain supplement, some individuals may experience mild to moderate adverse effects, typically due to how their bodies adjust to the supplement.

Total Memory contains Huperzine A. The available research indicates that Huperzine A is more likely to cause side effects and negative interactions with specific prescriptions when continuously taken for more than 30 days.

Therefore, we recommend cycling the supplement regularly, taking one week off every three weeks as a minimum. Longer breaks are advised after repeated cycles.

Some prescription medications that may interact[15][16] with AZOTH Total Memory include:

8) Where to Buy Total Memory

AZOTH Total Memory is readily available at many online retailers. The nootropic can be purchased directly from AZOTH’s official website, but it may also be found in other online retailers, including Amazon, Walmart, eBay, and VitaminShoppe.

9) How Much Does Total Memory Cost?

10) How to Take Total Memory

As a dietary supplement, take one (1) capsule daily, preferably with a light meal. Consistent daily use for a prolonged period of time with periodic breaks is recommended for best results. Do not exceed recommended dosage. Consult your healthcare provider before use.

"I was starting a new job last week and knew I'd have a lot to take in. I just wanted something to help me not get a stress headache and be able to keep focus. I'm on the 5th day. And though I haven't got a headache, I didn't yet notice much of a "lightbulb" moment or feel more triggered to register information. I usually forget details and tasks. I am in a different environment altogether, so that helps, but I feel good overall about how I have been focused." [Read full review]

"I just started but noticed some improvement already. Also seem to have more focus and concentration. Less anxiety as well." [Read full review]

"As a server in a high-end restaurant, it's critical to know every ingredient in every dish to describe it and, more importantly, know exactly what people with allergic reactions should stay away from. If I go blank and can't remember what's in the dish, I'm going to look bad. My mom and sister took Total Memory and saw a difference, so I decided to try it. I don't know if it's a nervous thing, but so far, I haven't had any blank issues at work and feel confident that I will be sharp and on my game, which will affect my pockets." [Read full review]

AZOTH’s Total Memory features a relatively straightforward formula relying on three core ingredients, including 25 mcg of Vitamin D3 and 100 mcg of Huperzine A.

The third ingredient in this brain support supplement is Synapsa, a more concentrated, branded version of Bacopa monnieri. Total Memory offers 320 mg of Synapsa wrapped up with Vitamin D3 and Huperzine A in a single-capsule serving.

Price-wise, Total Memory is somewhere in the middle. While many users will not be deterred by the $29.99/month price tag, we believe better alternatives are available in this price range. 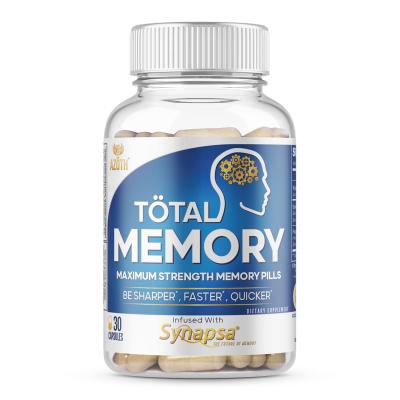 clear
Q:
What are the active ingredients in Total Memory?
A:

Q:
What is Total Memory?
A:

AZOTH Total Memory is a brain supplement that promises instant, long-lasting results in terms of attention, focus, memory, mental clarity, energy, and overall cognitive support. According to the manufacturer, the product can be used by people of all ages.

Q:
What are the Total Memory side effects?
A:

Q:
Where can I buy Total Memory?
A:

AZOTH Total Memory is readily available at many online retailers. The nootropic can be purchased directly from AZOTH's official website, but it may also be found in other online retailers, including Amazon, Walmart, eBay, and VitaminShoppe.

Q:
How much does Total Memory cost?
A:

Q:
What are the benefits of Total Memory?
A:

Q:
Does Total Memory work?
A:

The core ingredient in Total Memory is Synapsa, a more concentrated, branded version of Bacopa monnieri. While research is available on both Synapsa and Bacopa, CDRI (the company behind this patented Bacopa extract) is responsible for most of this clinical research. The preliminary results are encouraging, but additional research is needed, especially research conducted by 3rd party entities that are not financially supported by CDRI.

Q:
Can I take Total Memory with a prescription?
A:

Total Memory contains Huperzine A, an ingredient known to interact with various prescriptions. Therefore, we recommend consulting a medical doctor before taking the nootropic if you are under treatment or have known medical conditions.

Q:
Can I take Total Memory with other supplements?
A:

According to AZOTH, Total Memory works better in conjunction with other nootropic stacks made by the same company.

Q:
Does Total Memory have a recommended daily dosage for children?
A:

Total Memory is not intended for children or teenagers under 18.

Q:
Are there any dangerous ingredients in Total Memory?
A:

Total Memory contains primarily natural ingredients that should be safe when taken as recommended. Our only real concern is the inclusion of Huperzine A, a highly purified substance derived from the Chinese club moss plant. Typically, the purification process requires a lot of laboratory manipulation.

Q:
How do I know if Total Memory is right for me?
A:

AZOTH Total Memory is intended for those looking for a potent brain support supplement for attention, focus, memory, and concentration.

Q:
Can I take Total Memory if I'm pregnant or nursing?
A:

Q:
How should I take Total Memory
A:

As a dietary supplement, take one (1) capsule daily, preferably with a light meal.

Q:
How do I contact Total Memory customer service?
A:

Q:
Can I return Total Memory?
A:

Total Memory comes with a 30 days money-back guarantee. If you're not happy with your purchase, simply contact AZOTH's customer support and ask for a full refund. You will have to mail back the product at AZOTH LLC, returns, Suite 1609, 1 Franklin Street, Boston MA 02110.

Q:
What are the most common complaints about Total Memory?
A:

Most buyers are happy with the AZOTH Total Memory brain supplement. Still, some consumers complained about not noticing any improvements after taking the supplement.

Q:
What do Total Memory reviews say?
A:

AZOTH Total Memory reviews and testimonials on Amazon are positive. The supplement is rated 4 out of 5 (541 ratings), with 72% of the users rating the product with at least 4 stars.

Q:
Who makes Total Memory?
A:

Total Memory is made by AZOTH LLC.