Ginkgoba Memory Review – 6 Things You May Not Know

Ginkgoba Memory is advertised as an all-natural Ginkgo Biloba triple-standardized extract marketed to help brain function at its maximum potential. The manufacturer of the formula, the Alan James Group, claims the clinically tested standardized extract used to create Ginkgo Memory proved effective results in as early as four weeks with continuous, daily use. However, the manufacturer makes no reference to the exact study which reached this conclusion.

The Alan James Group markets a line of branded nutritional supplements for more than 10 years. The company is located in Boca Raton, Florida. Its current product portfolio includes items in multiple segments, such as Energy, Memory, Leg Vein Health and Heart Health.

According to the manufacturer, the formula works by safely enhancing oxygen-rich blood flow to the brain, thus naturally improving mental sharpness and helping with optimum brain function. Ginkgoba Memory works gradually and should be taken exclusively by adults as part of an ongoing health regimen.

1) Ginkgoba Memory at a Glance

Ginkgoba Memory contains the clinically proven GB3® (Ginkgo Biloba Triple-Standardized) extract, particularly a concentrated 50:1 Ginkgo Biloba leaf standardized to 24% Ginkgo Flavone glycosides and 6% Terpenes. This level of standardization used in a large number of published clinical studies and proven safe and effective is claimed to provide a consistent level of active ingredients. The Flavone glycosides and the Terpenes are two of over 40 active ingredients identified in Ginkgo Biloba.

Although the exact mechanism of action for each ingredient is not fully understood, the Flavone glycosides are primarily responsible for its antioxidant activity, whereas the Terpenes are associated with increased circulation to the brain as well as other parts of the body and are believed to exert a protective action on nerve cells.

Through the action of these active substances, Ginkgo Biloba is believed to improve working memory in healthy individuals and to treat memory problems and conditions associated to mental function decline (such as Alzheimer’s).

Ginkgo is generally safe but has been reported to cause stomach upset, nausea, dizziness, diarrhea or headache.

4) What You Need to Know Before Taking Ginkgoba Memory

5) How to Take Ginkgoba Memory

Precautions are recommended by the producer in case of patients taking a prescription medicine, such as an anticoagulant agent (a blood thinner) and in case of pregnant and nursing women. Consumer reviews report the product works to deliver on its benefit claims. The manufacturer recommends taking 1 capsule of Ginkgoba Memory daily.

6) Our Final Take On Ginkgoba Memory

Ginkgoba Memory is a single ingredient herbal formula based on a Ginkgo Biloba triple-standardized extract. The particular level of standardization of ginkgo has been clinically researched, which ensures the product quality, safety and effectiveness. There are consumer testimonials which add to testify to the formula’s effectiveness, making the product highly probable to work. However, each patient is different and the chances of working depend on a number of factors (previous health state, lifestyle, diet, etc).

The manufacturer recommends that pregnant and nursing women as well as people under blood thinning medication should see a healthcare provider.Also, Ginkgo Biloba has been known to interact with certain drugs and cause side effects (even if mild and rare), therefore we recommend specialized advice. 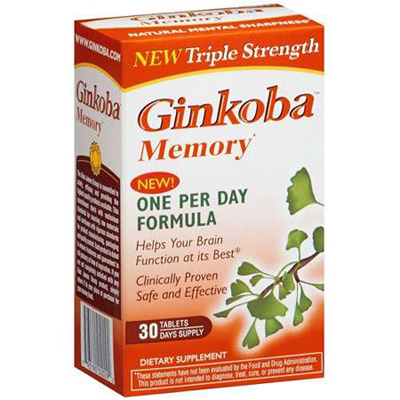