Memory Booster is an herbal supplement advertised to improve memory and recall, learning and the overall cognitive function in both adults and children. The formula is offered by Ethical Nutrients, an Australian company experienced in formulating nutritional supplement for a wide range of ailments. The company claims to be a leading Australian manufacturer, due to its commitment to providing high quality, safe and effective products based on cutting edge scientific researched and world class manufacturing techniques.

This particular formula is a single active ingredient product featuring a standardized extract of Bacopa Monnieri, patented under the name of BacoMind. Information about BacoMind and the research behind it, including clinic studies and scientific publications, can be consulted on the official page.

The compound is a trademark of Natural Remedies and was proven to improve several areas of cognitive function, as resulted from three published clinical trials. These trials, using human subjects (both children and adults) revealed BacoMind’s abilities to improve long-term and short-term memory, visual and verbal memory, working and logical memory, and auditory memory in children requiring IEP (Individual Education Programme).

Memory Booster features a high amount of standardized extract (4.5 g of Bacopa monnieri per capsule). The formula is offered as an effective cognitive support for adults and children who are interested in improving their memory, concentration, or learning.

Bacopa Monnieri is a perennial plant used for centuries in the Ayuverdic medicine in various areas. The cognitive enhancing benefits have always been considered the most important quality of this extract. Other uses of the plant include improving respiratory and cardiac function, reducing symptoms of gastrointestinal disorders, and alleviating symptoms of mood disorders and seizure-like conditions.

Bacopa has been intensively researched for many years. A large number of active substances were discovered, but those believed to benefit mostly the brain are the saponins. These were classified as bacosides A and B and were shown in clinical trials to improve learning skills and retention. Many clinical studies involved rats, but there are also human studies that show promising results.
Bacopa was also observed to possess excellent antioxidant properties. It also acts as a cell-protective substance, making it a recommended treatment and prevention remedy against neurodegenerative conditions and age-related memory impairment. Bacopa monnieri also modulates the action of certain enzymes known to produce harmful reactions in the brain.

For memory improvement and support of cognitive function, specialists recommend a dose of 300 mg daily for periods no longer than 12 weeks. Safety during pregnancy and lactation is not fully evaluated, so pregnant and breastfeeding women should refrain from using such a product. Some of the side effects reported are nausea, and fatigue.

The use of Bacopa monnieri supplements is considered likely safe when periods do not exceed 12 weeks at the recommended dosage. The most common side effects reported include dry mouth, nausea, and stomach discomfort. Bacopa may increase the risk of urinary obstruction, worsen the symptoms of certain lung and digestive conditions, and slow heart rate. Patients with such affections should be very careful when deciding to use Bacopa monnieri based supplements.

If you prefer a more complex nootropic formula, we recommend giving our Neurozan Review a read.

3) What Does Memory Booster Do?

Bacopa is a perennial plant from the Scrophulariaceae family. The main active chemicals are saponins, alkaloids, and sterols. These constituents have long been researched, and new constituents are still being discovered. The cognitive properties of this herb are believed to be owed mainly to the presence of two bacosides classified as bacosides A and bacosides B. These compounds have a complex mechanism of action and were shown to act on various levels of the nervous system. They are believed to enhance neuronal synthesis and restore synaptic activity and nerve impulse transmission. They are also powerful antioxidants with an important function in the prevention of age-related brain conditions, such as Alzheimer’s disease. Animal studies seem to support the claim that Bacopa monnieri has neuroprotective effects. These studies have shown that Bacopa’s active compounds modulate the activity of certain enzymes that generate reactive oxygen molecules in the brain, reduce inflammation of cell membranes, and act as relaxants on blood vessels.

Three studies involving the standardized extract BacoMind can be consulted on the official presentation page. The trials included both adults (elder individuals over 55 years old) and children (aged 4-18 years) with promising results. Improvements of attention spam, short-term and long-term memory, verbal and visual memory, and memory acquisition and retention were observed.

The use of Bacopa monnieri supplements is considered likely safe when used for periods up to 12 weeks without exceeding the recommended dosage. The most common side effects reported include nausea, stomach pain, fatigue, or dry mouth. However, people who suffer from digestive, heart, lung, or urinary conditions should take special precautions when using such supplements. To avoid any complications or unwanted side effects a healthcare specialist’s consent is highly recommended in these cases.

Memory Booster reviews are lacking at the moment of this review. The suggested dose varies from1 to 2 capsules daily, depending on the age of the consumer.

6) How Much Does Memory Booster Cost?

Memory Booster dietary formula comes in bottles of 60 capsules which are the sufficient dose for 1-2 months. Even at the maximum dosage, a monthly dose is affordable. The product does not seem to be sold directly by the manufacturer, but a relatively high number of online retailers sell this formulation. The prices vary, so the consumer should be careful when choosing the online supplier. Also, some online stores offer a money-back guarantee or various other discounts, which are also important decision factors.

A free sample does not seem to be available at any of the online retailers (identified by us, at the moment of this review). Online security is ensured by each retailer with specific technologies. The consumer is advised to read all terms and conditions before ordering the product.

Memory Booster’s suggested dose is 1 (for children under 12 years old) to 2 capsules per day (for adults).Memory Booster reviews are unavailable for consultation at the moment at this review.

Memory Booster is based on a popular herbal extract recommended as an alternative medicine for improving memory. The product is not unique and comes at a price that is situated in the same price range as the competitor’s formulations. However, the formula has the advantage of featuring a patented form of Bacopa monnieri which is also clinically researched. The official page of this standardized compound offers detailed information about the recommended dosage and the trials in which it has been used, as well as the evidence resulted.
Unfortunately, due to lack of testimonials from actual consumers, there is no evidence that this formula is indeed effective.

This formula is also suited for vegetarians and does not contain allergens like eggs, lactose, nuts, gluten, wheat, corn, cereals, dairy, and yeast. No artificial colors, flavors, preservatives or salt have been added. Memory Booster is available at various online retailers, in Pharmacies and Health Food Stores. 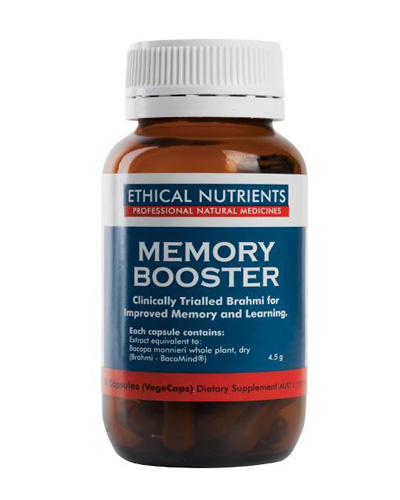 clear
Q:
What are the active ingredients in Memory Booster?
A:

Q:
Memory Booster is all about what?
A:

Memory Booster is a nutritional formulation based on a standardized and patented extract of Bacopa monnieri advertised to provide cognitive enhancing benefits. Its advertised therapeutic effects are those on the memory, learning and concentration ability. The formula is offered by an Australian company with a good reputation, called Ethical Nutrients. Memory Booster features the BacoMind extract, a trademark of Natural Remedies. This is a researched form of Bacopa monnieri that was shown to improve different areas of memory (visual, verbal, auditory or logical) and attention. An official presentation page offers detailed information about BacoMind's benefits, appropriate dosage, and safety of this compound. Memory Booster reviews are not available at the moment, so there is no evidence that this particular formula is effective. More information can be provided by consulting an informed healthcare specialist.

Q:
Does Memory Booster work?
A:

Memory Booster seems to be a superior Bacopa monnieri based formulation. This statement is based on the fact, that unlike similar formulations, this features a standardized form of active substance, that was clinically researched and proven safe (under certain dosages and). Sufficient information is available for those who want to inform about this extract. The formula is advertised as free of common allergens (eggs, nuts, lactose, gluten, wheat, dairy, and yeast), artificial colors, flavors, or preservatives, and salt.

This product does not contain any other active substances. The amount of Bacopa monnieri is relatively high as compared to the recommended daily dosage, so consumers should ensure that such an amount is also suited for their individual needs. This is possible by consulting a healthcare specialist who is aware of it medical history and can correctly evaluate the impact of such a product, and identify any potential side effects.

I think this is one of the best Bacopa based products I have tried so far. I love it because it works very fast and it does not give me side effects. I have been using it for two months now, and feel more alert than ever. My memory is also excellent since starting to take these capsules.

I bought this supplement because it contains a high amount of Bacopa monnieri extract, and wanted to increase my learning capacity very fast. I am satisfied with the product. It has helped me retain new information much easier and recall what I learned without much effort. I will definitely buy it again.