Memory Plus Review – Is it Effective?

Memory Plus is marketed as a synergistic blend of herbs designed to promote overall brain function health and to prevent age-related memory decline. Particularly, the formula works to support peripheral and cerebral circulation in order to provide brain energy, alertness, and concentration.

The formula targets people who wish to fight or prevent age related cognitive decline. With age, cognitive abilities are affected by free radicals damage, reduced blood flow to the brain due to arteries narrowing and capillaries renewal rate decreasing. Pregnant and nursing women are advised not to use the product.

1) Memory Plus at a Glance

Memory Plus is a dietary supplement designed to promote optimal brain help and provide support in age related cognitive decline. The formula is an all herbal blend of Ginkgo Biloba, Gotu Kola, Ginger Root and other herbal extracts known to promote brain health.

Gotu Kola was traditionally used by Ayurvedic medicine practitioners for its anti-inflammatory and anti-infections properties. Research conducted in modern gave the extract a number of other uses, for instance against fatigue, depression and anxiety, for treating psychiatric disorders and Alzheimer’s disease, for improving memory and intelligence or for circulation problems such as varicose veins and blood clots in the legs. Gotu Kola is caffeine free; therefore, it does not over-stimulate the brain. Side effects may include fatigue, drowsiness, upset stomach and nausea.

Ginkgo Biloba a plant used for centuries by traditional Chinese medicine is one of the most frequently used herbal extracts today. Research has identified more than 40 components in the Ginkgo tree leaf, two of which have medicinal benefits: the Flavonoids and the Terpenoids. Ginkgo Biloba is used to improve blood flow, including blood flow to the brain, thus having positive effects on memory and concentration. Additionally, it is used as an anti-oxidant in heart problems or prevention of free radical damage diseases such as dementia and Alzheimer’s.

2) Ingredients of Memory Plus

You may also consider an NAC-focused memory supplement like Cerefolin NAC.

3) What Does Memory Plus Do?

Dr. Christopher Memory Plus is claimed to be a unique herbal formulation designed to support the brain function, improve blood circulation in the brain, reduce age-related processes and promote a better memory and concentration.

Gingko Biloba is the key ingredient in this formulation. According to several records dating back to 2,800 BC, the Traditional Chinese Medicine was the first to investigate and use the properties of Ginkgo Biloba. They used dried ginkgo leaves to treat the symptoms of aging such as poor blood circulation, deterioration of the brain activity and memory loss.

Manufacturers are using Ginkgo Biloba extract in their products, as they believe it will be effective in improving cognitive functions but also due to its tremendous marketing potential. This plant is one of the most popular and well-known herbal ingredients, and many consumers may be drawn to purchase particular products due to this factor alone.

Gingko Biloba is considered safe with side effects rarely occurring, but gastrointestinal problems, headaches, skin reactions, dizziness and bleeding complications have been reported with gingko use.

Scientific studies and researches have shown that herbs, such as those found in Dr. Christopher Memory Plus, are not what the brain and body need to be nourished during the day. The much better alternative is to feed the brain with the neuro-nutrients it demands by whole foods.

5) What You Need to Know Before Taking Memory Plus

The recommended dose is 2 capsules 3 times a day or as directed by a health care professional.

Memory Plus is yet another herbal ingredient designed to fight age-related brain functions decline or to prevent deterioration to poor brain-blood circulation or free radical damage. Behind the formula there is the more than 50 years of experience of the manufacturer. The ingredients are highly popular herbal extracts. Some have been associated to side effects (some of which rather serious) and are known to interact with other medicine.

There are no consumer testimonials available online; therefore, it is a matter of debate if the formula actually work or not and if so, to what extent. We recommend caution, as always. 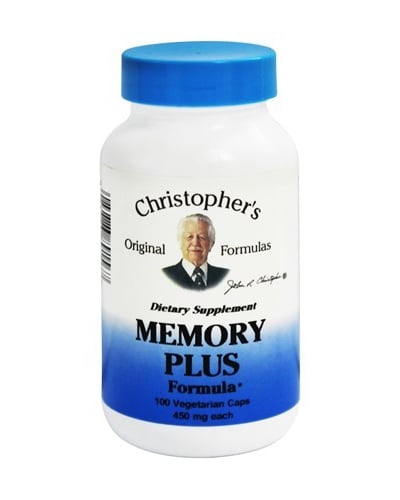 clear
Q:
What's inside Memory Plus formula?
A:

Q:
Can Memory Plus improve cognitive health?
A:

This formula may be appealing to those who are seeking a natural, short-term solution to support their cognitive function but in the long term, it may prove to be ineffective.

It is important to focus on products that have been fully researched and proven to work over and over again.