Memory Mind Matrix is a supplement and nootropic which promises to improve your memory, focus, clarity, and general mental performance. It’s sold by Nature’s Wellness Market, a company based in Miami, Florida. Products are made in the USA. The FDA registered facilities are GMP (Good Manufacturing Practice) certified by the NSF (National Sanitation Foundation). Their marketing and online presence is greatly superior to many other supplement companies. They’re frequent users of Instagram, Twitter, Pinterest, and Facebook. This shows a more genuine effort to connect with their customers than most other companies. They also have a physical location and telephone number, with actual hours of operation.

2) What Does Memory Mind Matrix Do?

Each serving contains Ginkgo Biloba, St. John’s Wort, L-glutamine, DMAE, and more. DMAE (dimethylaminoethanol bitartrate here) is an organic compound that may improve memory, mood, energy levels, and add some mental stimulation (without use of stimulants like caffeine). It may help with performance in physical exercise too, when combined with other ingredients. Unfortunately Memory Mind Matrix doesn’t contain any of those ingredients (vitamins, minerals, ginseng) but it’s meant to be more of a mental enhancer than physical enhancer. Because of DMAE’s effects on the mind, it’s sometimes called “a mind health compound.” It can work itself into both roles, though, especially since ALCAR (N-Acetyl-L Carnitine) is present in this product.

St. John’s Wort is much more familiar than things like DMAE and ALCAR. It’s a medicinal herb used as a natural antidepressant and anti-inflammatory. There’s some evidence to show it can be an effective treatment for mild to moderate depression in humans, although more research is needed. Different countries can sometimes end up with different results, so it’s hard to perform a meta-analysis of the existing body of research.

The price is in the average range if you only take 1 capsule a day, but it’s still more expensive than its competitors. Similar products contain more capsules for the same price, or even a lower price, and may have a money back guarantee too. However, these products usually don’t have anywhere near the popularity of Memory Mind Matrix, which has accumulated a large number of reviews and testimonials online. Their guarantee also lasts for 60 days, double the standard 30 days. Nature’s Wellness Market also offers discounts and free shipping if you buy through their company website. They don’t ship outside of the USA.

Memory Mind Matrix contains 9 active ingredients. It features ginkgo biloba leaf, N-Acetyl-L Carnitine, phosphatidylserine, Huperzine-A, and more. Huperzine-A is something that isn’t as easily recognizable as ginkgo biloba, but it’s becoming included in a large amount of supplements. It’s derived from Chinese club moss and is highly purified for better quality and potency. However, because of the heavy purification, some people classify it as a drug. After being processed through a laboratory it doesn’t closely resemble the moss once used in some traditional medicines. Still, it’s a natural ingredient, and can provide a wealth of benefits. It’s being included in clinical research as well because it might alleviate symptoms of Alzheimer’s disease and a muscle disease known as myasthenia gravis. Like other nootropics, Huperzine-A can boost memory, alertness, mental energy, and learning capacity. The 10 mcg in Memory Mind Matrix is notably less than the typical dose of 50 to 200 mcg a day.

The inclusion of amino acids is almost always a mark of quality in a supplement. The ability for ingredients to penetrate the blood brain barrier is important for ensuring that your brain gets the nutrients it needs. Some ingredients can increase blood flow without also increasing blood pressure, maintain proper circulation needed for health and alertness. People who take Memory Mind Matrix talk about its ability to give them (and relatives) additional focus and mental performance. It even works well as an introductory nootropic for people unfamiliar with such supplements. The potency seems high enough to deliver results, but not enough to risk side effects. There are few downsides to considering Memory Mind Matrix for yourself or a family member. 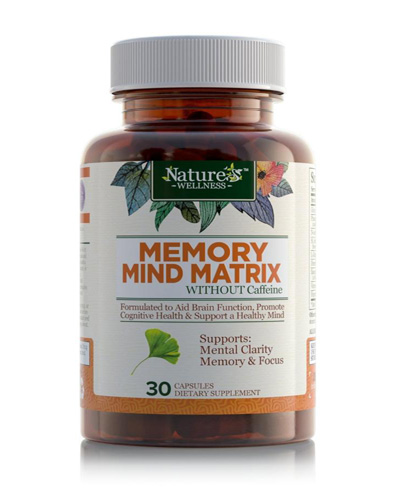 Q:
Are Memory Mind Matrix benefits actually a reality?
A:

Like most supplements, your mileage may vary. Some people see results within days – others may have to wait weeks, or never notice a difference. This is a common issue with supplements that don't contain vitamins or minerals for an added boost, as it's hard to satisfy every biological need. Overall, Memory Mind Matrix does seem to work. People report good results, even if those results are subtle. At the very least it may reduce any fuzziness you feel in your mind. There isn't any caffeine or sugar here, but people still talk about improved energy and focus, without significant side effects. Memory Mind Matrix looks to be a quality daily supplement.