Optimal Essentials Memory Plus Review – Is it Effective?

Memory Plus is designed as a natural way to protect and nourish the brain through its composition of nutrients (vitamins, anti-oxidants, Omega-3) that may assist with cognitive function protection and prevention of memory loss.

According to the manufacturer, the core benefits of the product include improvement of mood and emotional stability, eliminating fatigue and lethargy sensation, increased memory capacity and increased mental sharpness.

The product is manufactured by Optimal Essentials, a company founded in 2007 by leading Australian nutritionist Phil Sheldon. The company is based in Australia, but markets its products worldwide. The product range currently comprises 8 products, specifically nutritional supplement designed to assist people achieve a balanced and healthy diet. According to the manufacturer, none of the products contain artificial ingredients, and are, as much as possible manufactured with certified organic ingredients.

Memory Plus is a mixture of vitamins, minerals, anti-oxidants, herbal extracts and other chemicals designed to support brain health and cognitive function.

The herbal ingredients which may be found in Memory Plus include Ginkgo Biloba and Ginseng, commonly used by modern medicine in products claiming to address memory and general cognitive function related issues. Ginseng for instance is a well-known tonic and stimulant, used for a wide spectrum of health conditions (from memory loss and headaches to digestion and flu symptoms). Both plants are considered generally safe, but have been associated to several side effects (nausea, vomiting, and dizziness in case of Ginseng).

Phosphatidylserine is another core ingredient of the product, a chemical which also enjoys popularity and attention regarding its effects on the brain and cognitive function. Research so far has revealed positive impacts on age related decline in mental functions (with its different forms such as Alzheimer’s or dementia), thinking skills, and ADHD.

2) What’s Inside Memory Plus?

The popularity of creatine goes beyond sports. Some formulas also use creatine for its brain benefits

The manufacturer mentions no side effects for the formula, nor does it provide ay scientific or empirical evidence of the product’s effectiveness. Also, no consumer reviews are available.

Memory Plus is an all-natural alternative for memory health and optimal brain function. The product is manufactured by an Australian company with the expertise of a reputable nutritionist named Phil Sheldon. The majority of its ingredients have been researched, with some having been proven effective in memory and other cognitive function related issues.

However, the manufacturer does not offer evidence to support the combination’s effectiveness. Also, there are no consumer reviews available so as to get a complete picture of the products effectiveness and side effects. Some of the ingredients are known to produce various side effects and drug interactions, even if mild and/or rare. We thus advise you to seek specialized advice to guide you through your decision of using the product.

You can also try a more focused memory formula like Nutrilite Memory Builder. 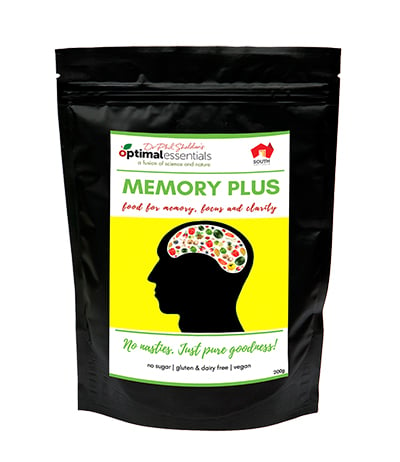