Ginkoba Memory is advertised as a supplement based on an all-natural, safe standardized Ginkgo Biloba extract. The main advertised benefits are increased concentration, memory and attention, whereas the product is designed for adults who experience decline or impairment of any of these essential cognitive functions as a result of stress, age or lifestyle.

The Ginkgo Biloba extract used to create the formula is claimed to be standardized at a level researched and tested for effectiveness and safety.

The manufacturer of the formula is The Alan James Group, a small company located in Florida, U.S.A. The company has been founded over 10 years ago and enjoys a good reputation. Its current product portfolio strategy is focused on marketing less than 10 products targeting conditions such as heart health energy, memory and vein health.

Ginkgo Biloba has been used for centuries by traditional Chinese medicine practitioners. Today, the plant is one of the most widely researched and used herbal extract. Ginkgo Biloba based supplements are among the bestselling supplements. Modern research has identified more than 40 components in the Ginkgo tree leaf, two of them being considered as having medicinal benefits: the flavonoids and the terpenoids. Laboratory studies on both animals and humans indicate that flavonoids may help protect the nerves, blood vessels, heart muscle and retina, whereas terpenoids could improve blood flow by dilating blood vessels.

Common side effects, although rare, include stomach upset, skin reactions, headaches and dizziness. Due to its blood circulation enhancement properties, ginkgo may interact with medication for high blood pressure or blood thinning medication.

3) Does Ginkoba Memory Work and it is Safe?

Advertised as a product with no artificial stimulants, sugars or caffeine, Ginkoba Memory is composed mainly of Ginkgo Biloba standardized extracts. Research has shown that Ginkgo Biloba is a tree among one of the oldest species. It can be found in North America, China or other countries around the world. Although it is used as a memory enhancer, it has other beneficial properties as well. Among these are treating symptoms related to diseases such as Alzheimer’s or peripheral artery, enhancing blood circulation and helping with macular degeneration and glaucoma.

The active compounds found in Ginkgo are called glycosides and terpene lactones. These thin the blood, thus helping improve muscle tone from the blood vessels walls. This process determines enhancement of the blood flow throughout the body.

On the other hand, because it affects the blood clotting, gingko extracts should be avoided by people who suffer from bleeding disorders. Moreover, any person who has epilepsy should prevent this remedy because it can increase the number of the seizures. Consumption of Ginkgo-based supplements can lead to some unwanted side effects. These include headaches, skin reactions, digestive problems and muscle weakness.

There are a few online testimonials about Ginkoba Memory:

5) Precautions of Ginkoba Memory Use

Ginkoba Memory is sold by bottles containing 90 capsules, on manufacturer website or other online and offline retailers. It can be regarded as an affordable remedy, specifically when compared with similar supplements. People that buy larger quantities may take advantage of some promotions and discounts offered by retailers.

The recommended daily dose for Ginkoba Memory is 3 tablets a day. According to the manufacturer, the product does not contain caffeine, sugar or artificial stimulants. Consumer testimonials are generally positive, with consumers reporting improved memory recall, clarity, sharpness and focus.

8) Our Final Take On Ginkoba Memory

Ginkoba Memory is a standardized Ginkgo Biloba leaf extract. The product has a dedicated website, on which consumers may find extensive information on the main ingredient, usage, precautions, and main benefits. The manufacturer is a small company, but enjoys a good reputation with most of its product range.

Ginkgo Biloba is the subject of extensive research and is highly popular in brain health products. It has few associated side effects; however, precautions are advised for certain types of patients or for patients taking several types of medication. Consumer reviews for the product are generally favorable. Most frequent negative aspects mentioned by the consumers include headache and low effectiveness. 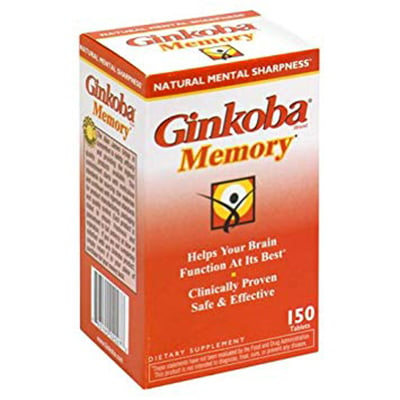 clear
Q:
What are the core ingredients in Ginkoba Memory?
A:

Q:
What is Ginkoba Memory?
A:

Ginkoba Memory is an all-natural standardized Ginkgo Biloba extract manufactured by the Alan James Group. The product contains Ginkgo Biloba leaf standardized to 24% Ginkgo Flavone glycosides and 6% Terpenes, a level of standardization clinically proved to help sharpen concentration, mental focus and memory by safely increasing the flow of oxygen-rich blood to the brain.

As another Ginkgo-based product, Ginkoba Memory represents an opportunity for people to improve their cognitive functions without using prescription medications. Customer testimonials advertise it as an affordable and effective remedy. It is recommended for people from young to old. However, there are a few unwanted effects related to the Ginkoba Memory treatment. The most common are headaches, nausea, muscle weakness and skin reactions. If people following label dosages stumble upon one of these reactions, they should immediately stop the usage.

To obtain desired results, this supplement should be combined with a healthy lifestyle.

Ginkoba improved my memory, focus and I could analize things clearly. I started with one table a day but now I use it only twice a week because my eyes got red. I honest recommend this brand of Ginkoba!

Got this for my husband, he couldn’t do without it.

So glad I tried this Allen James Group Ginkoba supplement. It has no ingredients in it that I am sensitive to. When I first tried it, I cut it in half which suited me physically. Now I can take the whole pill. I can tell a big difference in my memory.