2 User Comments | 11 Answered Questions
Evidence Based This BrainReference content is medically reviewed or fact checked to ensure factually accurate information. Click for more info. | Summary | What's Inside? | Side Effects | Cautions | Cost | Where to Buy? | How To Take | Conclusion | Alternatives to Ceriva | Q&A

Memory and cognitive functions form the essential parts of human life and interaction, and these functions may decline as the brain gets older. This is partly due to decreased synthesis of Acetylcholine, one of the primary neurotransmitters found in the nervous system.

Ceriva is a dietary supplement that is designed to support healthy memory and cognition by modifying the metabolism of Acetylcholine. It has neuroprotective effects and may sustain the cognitive functions of the brain as well as memory as the years go by.

This review discusses the benefits of Ceriva and if it is the right supplement for you, so keep reading to find out more.

Ceriva is a blend of Huperzine A and Polypeptide complex that works to improve memory and cognitive function. It can be effective in increasing memory and learning capacities and also beneficial to those suffering from Alzheimer’s disease and dementia.

Ceriva is manufactured by Metagenics, a United States business established in 1983 in California. The company has a unique idea of quality and claims to focus on researching and testing the potency, effectiveness, and safety of every ingredient used.

Metagenics products are sold in several countries, including Canada, Belgium, The Netherlands, New Zealand, and Australia, and include popular supplements like Adreset, Thyrosol, and Ceriva.

The Huperzine A in Ceriva comes from the Chinese Clubmoss plant, a well-known ingredient in traditional Asian medicine. Huperzine A has been used medicinally since the 1980s, and prevents the breakdown of acetylcholine by inhibiting an enzyme called acetylcholinesterase.

Huperzine A may help improve symptoms of memory deficits like in Alzheimer’s disease and other kinds of dementia.

Ceriva improves the availability of Acetylcholine through its core ingredient, Huperzine A, which inhibits the enzyme that breaks down Acetylcholine.

Acetylcholine is a neurotransmitter that plays a vital part in memory and cognition. In the human brain, the hippocampus is an area that primarily has memory functions, and its neurons are largely cholinergic, meaning that they function with Acetylcholine. As the brain gets older, the synthesis and release of Acetylcholine may decline, leading to memory deficits.

Users of products containing Huperzine A, the core ingredient in Ceriva, have reported cases of nausea, diarrhea, and vomiting.

You can purchase Ceriva from the company website or Amazon.

7) How Much Does Ceriva Cost?

You should take one tablet of Ceriva once daily with food.

Ceriva appears to be a potent supplement that can improve memory and cognitive functions. It contains a herbal extract from the Chinese clubmoss plant that is generally safe when taken as recommended.

Overall, Ceriva contains well-researched ingredients, is made by a reputable company, and may be the right supplement to help you improve your memory and cognition. 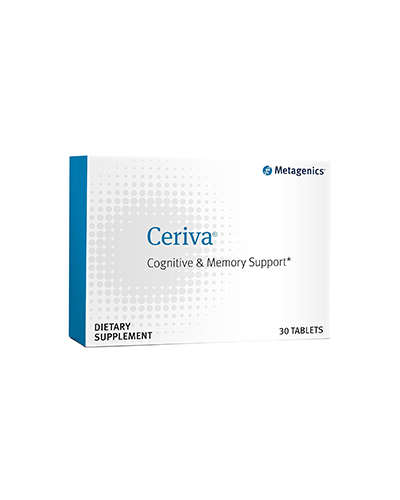 clear
Q:
What are the core ingredients in Ceriva?
A:

Q:
What is Ceriva supplement?
A:

Ceriva is a dietary supplement with a blend of ingredients that helps improve memory, cognition, and learning.

Q:
What are the Ceriva side effects?
A:

There have been reported cases of nausea, diarrhea, and vomiting associated with using products containing Huperzine A, the core ingredient in Ceriva.

You can buy Ceriva from the Metagenics store or Amazon.

Q:
How much does Ceriva cost?
A:

The combination of ingredients used in Ceriva may be beneficial in managing Alzheimer's disease and memory loss and may improve cognitive functions; however, results may vary by individual.

Ceriva may be an excellent choice for you if you want to improve your memory and cognition with a natural supplement that's made by a reputable company.

Q:
How should I take Ceriva
A:

Take one tablet of Ceriva once daily with food.

Q:
How do I contact Ceriva customer service?
A:

You can contact the Metagenics customer support department by calling 1.800.692.9400.

Return options for Ceriva may vary by retailer.

My job requires me to think on my feet and take rapid decisions and after a while it can get overwhelming and that’s when this product steps in, it gives me all the energy and focus I need.

My father started to experience age related memory loss, nothing serious, but inconvenient. He started using these pills and within a month things started to get better, now it has been 6 months and things are back to normal.