Memory is a dietary supplement advertised as having two core benefits: improved cognitive function and improved mental performance in terms of memory, concentration and learning skills. The manufacturer of this product called Fusion Health is an Australian business. The company uses Ayurvedic medicine principles and ingredients to manufacture, through modern scientific methods, herbal remedies for a variety of heath conditions. According to the manufacturer, all company products comply with the latest guidelines from the Australian Therapeutic Goods Administration (TGA).

Secondary benefits of Memory include reduced mental and physical fatigue, improved stress resistance, relief of mild anxiety, and promotion of a balanced mood and help with management of tinnitus (ringing in the ears).

The formula is recommended to both children over the age of 6 and adults who desire to improve their memory, concentration and learning performance or simply wish to maintain cognitive function health. Memory is not advised during pregnancy.

Memory is an herbal combination of 6 ingredients designed to improve cognitive function and mental performance of three core parameters: memory, concentration and learning.

Siberian Ginseng can be traced back centuries ago when it was used by the Eastern countries (China and Russia) to prevent colds and flu and to increase energy, longevity, and vitality. Today, the herbal extract has been the topic of numerous studies testing its potential beneficial effects on viral infection, mental and physical performance, immune system, blood pressure and sleep. Siberian Ginseng is also known to posses powerful adaptogenic properties, therefore naturally helping the body cope with negative effects of stress. While, there is a strong tradition of use and there have are clinical trials that show Siberian Ginseng may work on improving mental performance and restore mental alertness, scientific evidence is still limited. Side effects are rare and may include anxiety, drowsiness, muscle spasms and changes in heart rhythms

Cola Acuminata or Kola Nut, although not such a popular herbal ingredients, is used for short-term relief of fatigue, depression and chronic fatigue syndrome. The plant is believed to have stimulant and cardio-tonic properties, although scientific evidence is still required. The Kola Nut is believed to be generally safe, however on the long run and taken in large quantities it may be unsafe. Also, it contains caffeine.

The formula is advertised to contain no artificial colors, flavors or preservatives, yeast, wheat, gluten, nuts, dairy or animal products.

If you want to see how a simpler nootropic approach works, we recommend reading our Nutrilite Memory Builder review.

3) Is Memory Right for You?

Fusion Health’s Memory is advertised as an herbal combination of six ingredients that have been designed to enhance three parameters of mental performances: learning, memory, and concentration. One of these ingredients is Siberian Ginseng, a plant which can be traced back thousands of years ago when it has been utilized to prevent flu and cold while increasing energy levels, vitality, and longevity.

Nowadays, this plant has been the subject of several studies testing potential beneficial effects on mental, physical and immune system performances. Also, this herb is thought to possess adaptogenic properties. Thus it should naturally help the body to cope with the adverse effects of stress. Even though this herb had a strong tradition of utilization there are clinical studies that accentuate its qualities, further research is required. Consumption of Siberian Ginseng related remedies may lead to some side-effects that include: drowsiness, changes in heart rhythms, muscle spasm and anxiety.

Another component of this dietary supplement is Cola Acuminata, also known as Kola Not. Despite the fact that this plant doesn’t enter the usual category of herbs used in natural supplements, it has shown benefits on depression, chronic fatigue syndrome and short-term relief of fatigue. It is believed also to have cardiotonic effects, although more studies are required. Even though it is viewed as generally safe, in large quantities or on the long run, it may prove harmful.

There are no online available customer testimonials about Fusion Health’s Memory. Thus its Effectiveness cannot generally be stated.

5) What You Need to Know Before Taking Memory

6) How Much Does Memory Cost?

Fusion Health’s Memory can be purchased online by customers from the manufacturer website. Its price can be regarded as affordable, in comparison with similar dietary supplements. However, when bought in larger quantities, discounts and promotions may be offered.

The recommended daily dosage for adults is 1-2 capsules, whereas children between 6 and 12 years old are advised to take 1 tablet daily. Although side effects are not mentions, the manufacturer advises that the dosage is not exceeded and that a doctor is consulted if symptoms persist. Consumer reviews could not be identified.

8) Our Final Take On Memory

Memory is likely to work given the combination of highly popular herbal ingredients, commonly known for their cognitive and mental-enhancing properties: Ginkgo Biloba, Bacopa Monnieri, Gotu Kola and Siberian Ginseng. However, the extent to its effectiveness cannot be currently assessed given the fact that no consumer testimonials were available online and the manufacturer bringing no evidence to support its claims either.

Also, the product may be a good choice for those looking for natural products or for those who have a history of allergies, as the formula is 100% herbal and contains no artificial colors, flavors or preservatives and is free of gluten yeast, milk, and other potentially allergenic substances.

Memory Formula seems to be a quality product; however, given that two of the ingredients contain caffeine and more have been reported to have side effects, we recommend you see a doctor prior to use. 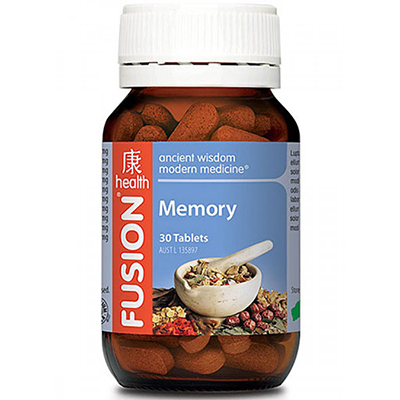 clear
Q:
What does Memory contain?
A:

Q:
Memory is all about what?
A:

Memory claims to be a formula that aims to support the brain's cognitive function. The company behind this product is Fusion Health, one of the most well known pharmaceutical companies from Australia. Memory is advertised as an all-natural supplement that uses ingredients such as Brahmi, Ginkgo Biloba or Schizandra Chinensis, as to provide support for the circulatory system, thus aiming to aid with memory, concentration and learning, as well as eliminating some memory loss causes.

Q:
Are Memory benefits actually a reality?
A:

Fusion Health's Memory represents a combination of herbal extracts with individually known properties. Because these are ingredients that have generally been used among the natural supplementation market, this product is likely to work. However, the lack of client testimonials determines people to doubt this remedy's Effectiveness.

The manufacturers claim that Fusion Health's Memory is 100% natural and contains no artificial colorings or preservatives. This aspect makes the product reliable for people with allergies or those looking for all-natural supplements.

I am not satisfied with this formula, I can’t feel significant changes in my learning ability.

This formula made my memory better, I am very pleased.