Attentia is advertised as a nutritional supplement for memory and mental support. The product is formulated for North American Pharmacal by Dr. Peter D’Adamo under the D’Adamo Personalized Nutrition brand. According to the manufacturer, Attentia works by bringing together antioxidant, herbal and amino-acid ingredients with a long history of traditional use and which have been demonstrated successful in improving brain function (in scientific research studies).

Attentia is specifically designed for adults who face cognitive performance challenges due to a variety of factors, from stress to aging. The formula is also suited for vegetarians.

Attentia is a mixture of herbal extracts and antioxidants, in a formula free of sugar, salt, gluten, wheat, yeast, corn, soy, eggs, dairy, preservatives, color or flavors and any other artificial ingredients.

Ashwagandha is an ancient Indian herb which has been traditionally used for relieving anxiety and stress and for its excellent protective effects on the nervous system. Due to its powerful antioxidant properties, it is a trustworthy ingredient in protecting brain cells from free radical damage and helps prevent numerous age related diseases. Scientists suggest that it can also boost the immune system, strengthening the overall body resistance to disease. Emerging evidence suggests that the herb may have anti-cancer benefits as well. Side effects include stomach upset, vomiting and diarrhea whereas its long term use effects are still investigated.

There is strong evidence that indicates Grape seed extract may help with cardiovascular conditions, poor circulation, high cholesterol, reduces swelling caused by injury an helps with eye disease (caused by diabetes). Just as popular are its antioxidant properties, making it a powerful tool against free radical damage, and useful in strengthening and repairing connective tissue. The extract is rich in a substance called Oligomeric Proanthocyanidins which was shown to be able to cross the blood/brain barrier and protect neural tissue. Grape seed extract is generally considered safe. Side effects may include headache, itchy scalp, dizziness, and nausea.

Recent studies have shown that the grape seed extract might possess some qualities and lead to positive effects when dealing with cellular rejuvenation. Apparently, the compounds found inside the grape seed extract can rebuild brain cell networks and provide antioxidant support to prevent the release of harmful free radicals. Additionally, the journal Phytotherapy Research documents grape seed extract’s ability to strengthen brain cell connections in the hippocampus (the memory control center of the brain).

Another essential element of the formula is the Ginkgo Biloba extract, traditionally used in the treatment of vascular system disorders and as a memory enhancer. Because of the Ginkgo leaves blood thinning properties, the oxygen being delivered to the brain increases, thus enhancing memory, preventing headaches and other poorly functioning brain functions caused by low oxygen levels. Several studies found that Ginkgo Biloba might have a positive effect on Alzheimer’s disease because of its capacity to delay the symptoms of dementia. However, other studies concluded that the herb has little to no effect on this matter which makes the given results mostly inconclusive. Ginkgo Biloba is still being researched, while common side effects include headaches, dizziness, and stomach and skin problems.

When talking about the properties of Siberian Ginseng, results are mostly contradicting and become irrelevant. Research has shown that it might have a positive effect on improving the quality of life in seniors and helping them better function in society in the first few weeks of use, however, its resulting effects decrease with time. Traditionally, Siberian ginseng was used to treat and prevent colds and increase energy. Some studies suggest that Siberian ginseng might play a role in maintaining and restoring mental alertness, however, extensive research is needed to prove it has an effect.

The supplement has not received consumer reviews that we could identify. The daily recommended dose is one capsule, and no side effects are being mentioned for the formula.

6) How Much Does Attentia Cost?

The price of Attentia is similar to other formulas based on largely the same combination of ingredients. This may be considered a moderately priced supplement. The formula is currently being sold in bottles containing 60 capsules, suitable for vegetarians, that, in compliance with the recommended daily dosage, should last two months. The formula may be purchased at a lower unit price if certain money-saving packs offered by the manufacturer are purchased. This product is available for purchase on the manufacturer’s website as well as from other online and offline retailers.

The suggested dose is 1 capsule two times a day with a meal. No side effects are mentioned for Attentia and there are no consumer reviews available online.

Based on a blend of some of the most popular herbal ingredients known today and the powerful antioxidant Grape seed extract, Attentia is especially formulated to help maintain healthy cognitive function in adults. It is particularly helpful for memory and mental support. And while there is no clear evidence of the formula’s effectiveness, the product is very likely to work given the combination of Ginkgo Biloba, Siberian Ginseng and Ashwagandha which have been tested and proven effective in cognitive function related conditions.

We advise you read the label and, if possible, get a specialized opinion prior to use. 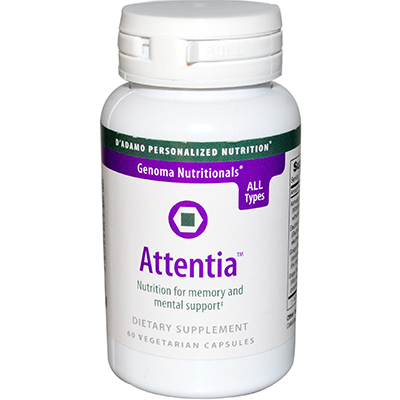 clear
Q:
What are the active ingrediens in Attentia?
A:

Q:
Attentia is all about what?
A:

Attentia is a blend of potent herbal extracts designed to help improve memory, support cognitive function and protect neuronal connections. The formula manufactured by North American Pharmacal features ingredients such as Ginkgo Biloba, Eleuthero root, Grape seed extract, and Ashwagandha in standardized extracts. These ingredients have been heavily researched and proven to certain extent to positively enhance brain performance. Attentia should help people who suffer from cognitive impairment caused by aging, stress or other factors, while also claiming to modestly improve symptoms of dementia and Alzheimer's disease.

Because of its powerful ingredients, Attentia seems like a healthy alternative when dealing with age-related memory loss and chronic fatigue; however, just because its formula consists of ingredients that are proven to be effective against these degenerative brain functions does not guarantee its success. Most consumers are unaware of the fact that different individuals need different formulations and blends to achieve positive results. Not enough information has been made available to demonstrate Attentia's ability to improve memory and other mental functions, but all in all, it seems like a promising substitute for other more powerful drugs.

I’ve previously tried a number of brain enhancing supplements, because although I’m only 34 I sometimes find myself embarrassed with forgetting even the most simple things (like the name of a business partner whom I’ve seen 2 times before). I am currently satisfied with Attentia, plus it comes with an affordable price.

I started taking this at the advice of my naturopath. I really feel comfortable with the fact that all ingredients are available as standardized extracts. I felt just slightly dizzy in the first few days (I am aware that Ginkgo can do that) but then everything went smoothly. I’, more alert, my memory and focus are sharper. I am happy with my choice.