Nootropics, or “smart drugs,” are a class of substances that can boost brain performance. They are sometimes described as cognition enhancers or memory-enhancing substances.

The question is: Does Qualia Mind deserve its popularity? Read our Qualia Mind supplement review to find out.

Qualia Mind was released by the Neurohacker Collective in April 2016 and has grown rapidly since then.

Qualia Mind is advertised as a “premium nootropic for mental performance.” Its unique formulation consists of active ingredients such as amino acids, vitamins, and herbal extracts, most of which are well known among the biohacking crowd.

While relatively expensive compared to other similar products, Qualia Mind maintains a reputation as an effective and trusted brain supplement.

Qualia Mind is produced by Neurohacker Collective. The company founded in 2015 is currently located in Carlsbad, California.

According to the official Neurohacker Collective website, the company was started with the “mission of creating best-in-class well-being products by employing a unique methodology to research and development based on complex systems science.”[2]

Vitamins:
Contains the basics such as vitamin C, B complex, and Vitamin D

Adaptogens are herbs known to help users feel relief from stress and anxiety. Qualia Mind has the popular Rhodiola Rosea, one of the most studied adaptogen in the industry, with evidence showing positive effects on stress management and calmness.

Brain boosters
Qualia Mind’s key brain boosters include Bacopa Monnieri, Alpha GPC, and N-Acetyl-L-Thyrosine. These three ingredients are nootropic staples as each is known for their beneficial effects on memory and focus. Bacopa monnieri, in particular, is called a student’s nootropic due to its memory retention benefits.

The rest of the ingredients can be classified as brain health or brain function support. Some of the notable ones are Huperzia Serrata, Ginkgo Biloba, and DHA.

4) What Does Qualia Mind Do?

Let’s go over two of the most popular ones in the industry: Acetyl-L-Carnitine and Rhodiola Rosea.

Acetyl-L-Carnitine is a highly bioavailable form of L-Carnitine that specifically improves brain function. Studies suggest that it may benefit people with neurodegenerative diseases. [3]

Here are some of the nootropic benefits associated with Acetyl-L-Carnitine: 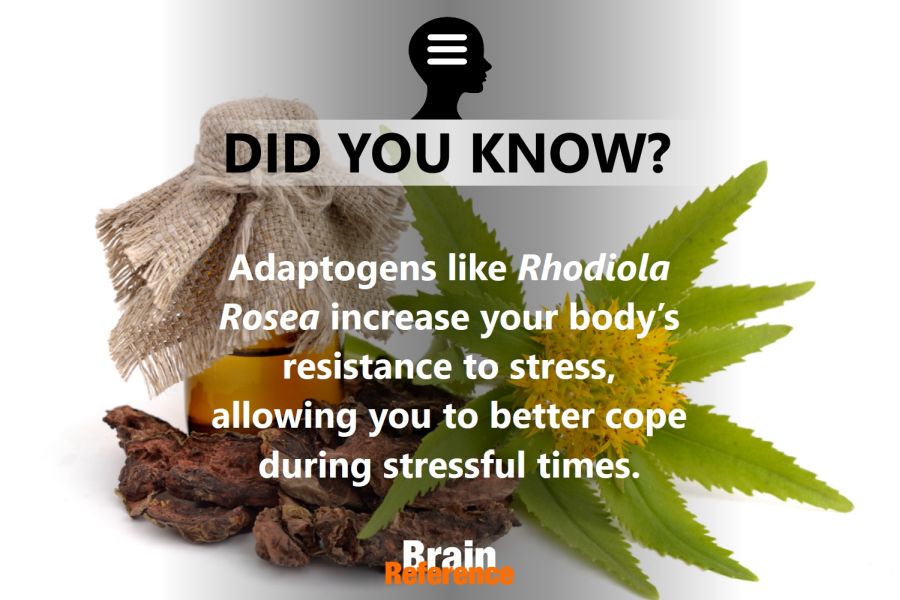 Rhodiola Rosea is an adaptogen or an herb specifically taken to lower stress levels. It’s also suggested to have antidepressant properties by balancing the neurotransmitters in your brain. [10]

In one six-week study on the effectiveness of Rhodiola on symptoms of depression, subjects who took Rhodiola experienced significant emotional stability improvements, overall depression, and insomnia, whereas the placebo group showed no improvements. [11]

In a pilot study, students experienced increased motivation to study, improved sleep patterns, and significantly reduced mental fatigue after taking Rhodiola supplements for 20 days. Their exam scores were also 8% higher compared to those in the placebo group. [12]

Other notable ingredients in Qualia Mind include:

Some of the benefits of taking Qualia Mind include:

The ingredients used in Qualia Mind are natural, widely-used, and they’ve all been tested in clinical trials.

However, some ingredients may still cause mild to moderate adverse effects in some individuals. These are caffeine, Huperzine A, and Ginkgo Biloba.

The formula contains 90mg of caffeine (about the same amount you would get from an espresso). Depending on tolerance, 90mg may be a casual energy boost or too stimulating. Some of these adverse effects may include: [16]

Huperzine A is another ingredient to keep an eye on, especially when taken long-term (for more than six months). Huperzine A can cause some side effects, including: [17][18]

Ginkgo Biloba may affect blood clotting and may trigger a number of mild to moderate adverse effects in some users: [19][20]

The dose per ingredient are within the safe/minimal range, so most people should feel safe. If you do feel something’s not right after taking Qualia Mind, cease intake and seek medical help.

8) Where to Buy Qualia Mind in the United States?

Qualia Mind is available for purchase from a number of online stores such as Amazon, eBay, Walmart, LuckyVitamin, Walgreens, and more.

You can also buy the supplement directly from the official Neurohacker Collective store.

A “Subscribe and Save” option is also available. Those who sign up for the autoship program will receive an $80 discount on their first order and $20 discounts for each order afterward.

As a dietary supplement, take seven (7) capsules with water in the morning before breakfast. Optimal dosage can vary based on body weight and sensitivity.

11) What Customers Say About Qualia Mind

"This product is great for energy and focus right now. I don't like the slightly fishy smell and taste. It's pricey, but if you want to be productive, it's effective within the hour. I'm not sure about long term aid to the quality of brain health." [Read full review]

"I was skeptical at first and weary of the high price point. After taking Qualia for four days, I feel like I've discovered how wonderful my brain works when I nourish it with proper nutrients. I feel like I've "woken up" while taking this supplement, and I've not loved each day as I do in a while. I highly recommend, and I Hope Neurohacker discovers a way to make this financially within reach for the masses." [Read full review]

"I believe the product has great potential. But the serving size (7 capsules) is too much for me. Being a post-bariatric surgery patient, I should've realized that the amount was too large. Oh well! I'll finish them in smaller doses and then look for something more potent in a single capsule." [Read full review]

As a complete, daily brain supplement, Qualia Mind may be a good choice.

Its potent formula is capable of quickly increasing mental stamina, heightening focus, and enhancing learning. It will give you laser focus for a good few hours.

We do have to note two downsides to Qualia Mind:

First, the premium price tag. At over $5 per day, once you are on a full-priced subscription, Qualia Mind costs almost four times what an average-priced nootropic would cost.

While we accept the high price-tag if it’s justified by several factors such as ingredients quality, strict manufacturing process, or quality packaging, some buyers will definitely turn to more affordable alternatives.

The other is the directions for use. Incorporating so many ingredients per serving forced Neurohacker Collective to have people take 7 capsules per serving. Some people may not like the idea of taking so many in one sitting. 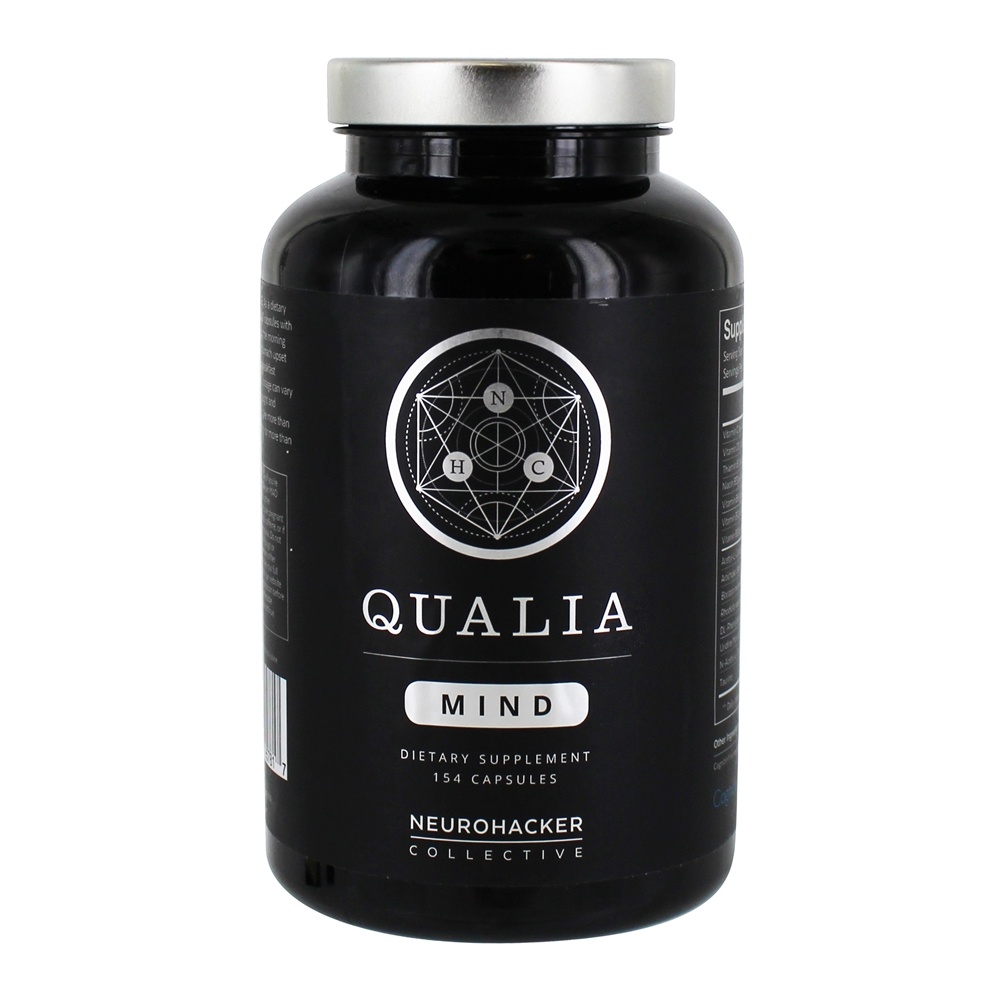 The complete list of ingredients in Qualia Mind are:

Qualia Mind is a nootropic with a 21-ingredient complex designed for memory, focus, mental energy, and concentration.

Q:
What are the Qualia Mind side effects?
A:

While advertised as generally safe, the formula contains several ingredients that may cause mild to moderate adverse effects in some users.

Qualia Mind side effects may include hypertension, jitters, chest pains, heart palpitations, confusion, dizziness, shortness of breath, anxiety, and inability to sleep among other possibilities.

Q:
Where can I buy Qualia Mind?
A:

Qualia Mind is available for purchase from a number of online stores such as Neurohacker Collective, Amazon, eBay, Walmart, LuckyVitamin, Walgreens, and more.

Q:
How much does Qualia Mind cost?
A:

Q:
What are the benefits of Qualia Mind?
A:

Q:
Does Qualia Mind work?
A:

Qualia Mind's nootropic complex uis capable of increasing mental stamina, heightening focus, and enhancing learning. It will give you laser focus for a few hours.

Q:
Can I take Qualia Mind with a prescription?
A:

Q:
Does Qualia Mind work better if taken in conjunction with other supplements?
A:

You can take the nootropic with other dietary supplements or your daily multivitamin.

Do note that due to a large number of ingredients in Qualia Mind, the product may interact with other dietary supplements, causing mild to moderate adverse effects.

Consult a healthcare provider before starting on multiple nutritional supplements.

Q:
Is Qualia Mind recommended for children?
A:

Qualia Mind is not intended for children and adolescents under 18.

Q:
Does Qualia Mind contain any potentially dangerous ingredients?
A:

Qualia Mind doesn't include any toxic or banned ingredients.

Q:
Who uses Qualia Mind?
A:

Qualia Mind is designed to improve overall cognitive function and it may be a good option for those looking for a quick boost in attention, focus, clarity, and energy.

Q:
Is Qualia Mind recommended for pregnant or nursing women?
A:

Pregnant or nursing mothers should consult a medical professional before taking the supplement.

Q:
How should I take Qualia Mind
A:

As a dietary supplement, take seven (7) capsules with water in the morning before breakfast.

We do note that some studies suggests supplements need to be cycled to maintain tolerance. Taking supplements every day nonstop will cause the body to have higher tolerance to ingredients, the same way coffee lovers can down two cups of coffee like it's plain water and still sleep well at night.

Therefore, to maintain the beneficial effects of Qualia Mind, we recommend cycling it. A basic recommendation is to take Qualia Mind for two weeks, then take another supplement with different ingredients for two weeks, and repeat.

Q:
How do I contact Qualia Mind customer service?
A:

Q:
Can I return Qualia Mind?
A:

For returns, simply get in touch with the company via phone or email and request a refund.

The 100 Day Money Back Return Policy applies as a full refund within 100 days for all first-time purchasers of an initial order of product, or final order of a subscription. It does not apply to an individual's additional product orders placed after an initial order.

Q:
What are the most common complaints about Qualia Mind?
A:

Q:
What do Qualia Mind reviews say?
A:

Neurohacker Collective Qualia Mind customer reviews and testimonials on Amazon are mixed. This dietary supplement is rated 3.7 out of 5, with 63% of the users rating the product with at least 4 stars.

Q:
Who makes Qualia Mind?
A:

Qualia Mind is made by the American company Neurohacker Collective.