SerotoninFX Review – Is it Effective?

SerotoninFX is marketed as a multi-benefit dietary supplement which will increase REM sleep, boost energy levels throughout the day, shorten athletic recovery times and curb daytime cravings of both sugar and food. The manufacturer The People’s Chemistclaims the formula is non-addictive and generally safe.

The producing company is a U.S. based company which manufactures a wide range of over-the-counter natural cures. In its mission statement, the company commits itself to providing high quality health products (no sugar, gluten, soy, fructose or any artificial ingredients).

According to the manufacturer, the supplement is a rapid action formula and the fastest dissolving capsule in the industry. The formula is supposed to trigger simultaneous production of deep sleep and anti-aging hormones.SerotoninFX is an alternative to prescription drugs designed to help people who suffer from insomnia and other sleep loss related conditions.

The main ingredients in SerotoninFX are L-Tryptophan (amino acid) and Valerian Root in high concentration, a combination which, according to the producer, will induce a state of deep REM sleep in as fast as 60 minutes.
L-Tryptophan is an essential amino acid (it is not synthesized by the organism, but should be part of the diet) which has been identified as a biochemical precursor of Serotonin secretion. Serotonin has various functions, among which the regulation of mood, appetite, and sleep. The Valerian is a commonly used sleep remedy possessing strong sedative effects.

During deep sleep, a repair process of the body cells takes place in which old cells are replaced by new healthier ones. Therefore deep sleep plays an important role in the aging process and particularly aids in slowing it down.

Some supplements also capitalize on the supposed anti-aging effects of some ingredients like Nature’s Plus Source Of Life Liquid Red.

Other serotonin supplements like BrainMD Serotonin Mood uses other ingredients like Folate for an added brain health effect.

3) Is SerotoninFX Right for You?

SerotoninFX is a dietary supplement that was created to promote restful night sleep, to improve the energy levels during the day and to promote general well-being.

The formula contains L-Tryptophan as one of the two largest ingredients. This amino-acid can be found in many different supplements on the market due to its massive popularity. L-Tryptophan is an isolated amino acid that the body cannot produce on its own but requires to create Melatonin and Serotonin. According to the manufacturer, this ingredient plays a crucial role in supporting the quality of sleep and reducing anxiety and depression.

SerotoninFX also contains concentrated Valerian (whole herb). This plant has a long history of use (the first references to Valerian as an herbal remedy date from the ancient Rome and Greece). The plant was commonly used as a pain reliever, anticonvulsant, sedative and migraine treatment. Due to its tranquilizing properties, many scientists believe there is a connection between Valerian and the GABA neurotransmitter receptor system.

While the manufacturer promotes SerotoninFX as a safe product, there are several known side effects associated with the use of this supplement that may derive from the utilization of the core ingredients. They include fatigue, dizziness, nausea, dry mouth, headaches, changes in appetite, and irritability.

SerotoninFX reviews and consumer testimonials are hardly available online, making our mission to assess the formula rather difficult.

Each bottle of SerotoninFX contains 90 capsules, which should be enough for three months of treatment at a recommended dosage of one capsule per day, taken before bedtime. This is an inexpensive supplement. At the time of this review, a 3-pack offer is also available, which makes the unit cost even lower. No details on a money-back guarantee or free sample policy are disclosed on the official page.

According to the manufacturer there are no side effects associated to the product. No empirical evidence is however provided to support these claims.

As many similar products in the non-prescription category do, SerotoninFX makes benefit claims which are not supported by clinical tests or empirical evidence, except some consumer testimonials which are to be treated with caution. Although individually the ingredients have been linked or shown to aid in sleep processes, there is no research to prove the product’s effectiveness.

The product is marketed as a product with a wide spectrum of benefits (from anti-aging properties to being a sleep aid). This explains the mixed reviews the product is getting. Each patient is different and has different expectations. The gravity of their conditions also varies, thus making the success of the formula a matter of subjective assessment. 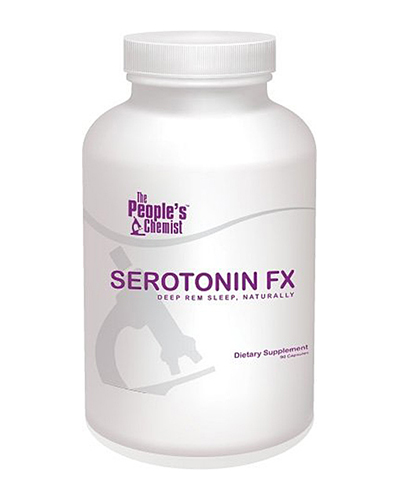 clear
Q:
What does SerotoninFX contain?
A:

Q:
What is SerotoninFX?
A:

SerotoninFX is presented as an all natural formula that is highly efficient in dealing with sleep problems, stress and anxiety, boosting sex-drive, increasing productivity, and promoting better memory. This particular dietary supplement is presented as containing no sugar and no synthetic substances, so that it would only provide the organism with natural ingredients for a healthy sleep.

The main ingredients that can be found in SerotoninFX are the herbal extract Valerian root and the essential amino acid L-tryptophan, both being commonly used in such supplements for healthy sleep and appetite control. SerotoninFX reviews from consumers are not available online. No precautions or side effects are mentioned by the manufacturer either, nonetheless some may be associated with the use of the two core ingredients.

Q:
Are SerotoninFX benefits actually a reality?
A:

The manufacturer launches some bold claims for certain, and some of them appear to be supported by several conducted clinical studies and trials. However, we believe that more research is necessarily to prove the Effectiveness of SerotoninFX.

On the other hand, many people have found success in using Valerian (whole herb or root extract) to reduce stress, elevate mood and promote a better, restful night sleep. It is also important to note that each is different and the formula may not be as effective in each patient.

This product is not working for me, still not sleeping

Title for your comment
Product not working
Have you tried this product?
Yes
Reply
QT

This product works,but i cant get past the smell of it. why dose it smell so bad or should it smell? do i have a bad batch? can someone help?

I like this product but it smells bad
Is it suppose to smell?

Quantity of seratonin and whole herb valerian root in each capsule. So I can use it with other supplements

This product if over-hyped junk, that does very little, and is sold at an outrageous price. This guy has a lot of nerves with his snake-oil stuff.

So far I have not had any results from serotonin fx, neither good nor bad. Has not helped sleeping, still wake after 3 to 4 hours. Only thing that helps is half a PM

Hello – I am a 74 year old male in generally good health. I am currently having great difficulty in getting to sleep and staying there. I have tried melatonin, and other natural sleep aids with limited success. I am most likely ‘addicted’ to Ambien and can’t fall asleep at all without it. I am searching for a safe alternative. My concern is that Iam also taking Nardil 45mg Daily (MAOI) and occasionally a Klonopin. I Have been diagnosed with mild depression and SAD. Can I take Serotonin-FX and other herbal sleep aids with these two Rx’s? Thank you.