E-Manganese Review – 7 Things To Look For

E-Manganese represents as an herbal remedy that aims to maintain a healthy pituitary-gland. The supplement was introduced on the dietary supplementation market by Standard Process in 1958.

Its producer is a world-wide known business founded in the United States in the year 1929. By having a background older than 80 years, Standard Process produces nowadays more than 300 products which range from herbal remedies to veterinary products. Compared to similar companies, this business separated its products into three major categories that are MedHerb, Standard Process whole food supplements, and Standard Process Veterinary Formulas. In spite of their experience on the nutritional field and their statements that assures their customers of their GMP certified labeling system as well as manufacturing processes, their products haven’t been FDA approved yet.

E-Manganese is in fact a mixture between Vitamin E, Calcium, and Manganese which promises to offer required nutrients in order to keep healthy nerves and improve nerve impulses transmissions, thus providing an improvement of the nervous system. Furthermore, its nutrients are claimed to help the function of the pituitary gland and it has roles supporting other organ systems.
Standard Process also states that the ingredients used in their remedies have not been disassociated into isolated compounds, thus being delivered intact and complete to the body.

The pituitary gland represents the gland found in the center of the skull, right behind the nose. Although its size is no bigger than that of a pea, the pituitary gland is most of the times considered to be the “master gland” of all endocrine systems because it links the endocrine system with the nervous system and stimulates release of hormones that directly affect reproduction, sexual development and growth. Furthermore, it enhances water absorption by kidneys and oxytocin, thus stimulating milk production and contracting the uterus during birth.

Because maintaining the health of the pituitary gland is of high importance, most companies producing nutritional supplementation have created products meant to improve its functions. A product like this is E-Manganese whose active ingredients are claimed to be linked directly to the pituitary gland.

One of the ingredients found in E-Manganese is Vitamin E, an antioxidant that enhances cellular protection against oxidative damage while stimulating tissue renewal. Moreover, studies revealed that Vitamin E can also be efficient in treating issues of the central nervous system such as Alzheimer’s or dementia. Additionally, women take this vitamin for preventing complications of late pregnancies, hot flashes linked to breast cancer, premenstrual syndrome and menopausal syndrome.

Ordered online or purchased directly from local retailers, E-Manganese is a product considered to be expensive when bought by a single bottle. One bottle contains 50 capsules which are sufficient for approximately 50 days of usage if the label is properly followed. However, when other complications appear, the intake may vary. People from outside America are unable to buy this product directly from the manufacturer since it has no international shipment policy. Thus they should look for it with other physical or online retailers. Most of the times, when bought in larger quantities discounts and promotions are offered, particularly for regular customers.

The manufacturer suggests taking one capsule per day, after meal and with water in order to obtain desired effects without side-effects.

Overall, E-Manganese is an herbal remedy that uses a combination between Vitamin E, Manganese, and Calcium which aims to regulate or maintain the function of the pituitary gland, considered to be of the highest importance the body. Furthermore, this remedy should help regulate the central nervous system, thus alleviating symptoms of people that have dementia or Alzheimer’s disease. Specifically, the product targets women prior or after childbirth, because it contracts the uterus during birth and enhances milk production.

Although there are no E-Manganese side effects mentioned, people be careful with the labels and if any unwanted side-effect is experience, they should immediately stop the treatment. 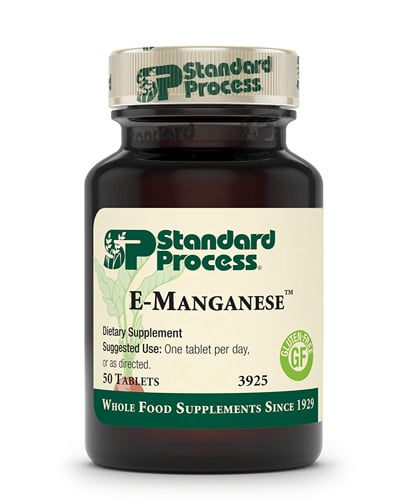 clear
Q:
What does E-Manganese contain?
A:

E-Manganese is advertised as a remedy which focuses on enhancing the function of the pituitary gland, known as “the master of the glands" due to its connection to the nervous system as well as other bodily functions. The product was introduced in 1958 by Standard Process. Particularly, it is recommended for women, due to the fact that it enhances milk production and helps contract the uterus doing childbirth. No side-effects were reported until now.

All in all, E-Manganese represents a product that features a mixture of Vitamin E, Calcium and Manganese meant to regulate the functions of the pituitary gland which is considered to be the most important in the body. Moreover, this product should regulate the nervous system and help alleviate the pain of people who have dementia or Alzheimer's. Particularly; women may take advantage of this treatment before or after childbirth since it enhances milk production and contracts the uterus during childbirth.

Despite the fact that there are no mentioned side effects of this product, people should follow the treatment according to the labels, and if they experience any, seek further medical care.

This is my third time being pregnant. I’ve never used nutritional supplements til now, but I’m glad I chose this product! I have no pain and I really feel more energized than the last two times. I would also recommend this product to pregnant women.