Vitamin C & E with Rose Hips is a dietary supplement designed to promote antioxidant health and immune system function. Both vitamin C and E are natural antioxidants- substances capable of counteracting the damaging effects of oxidation processes. The results of oxidation are free radicals which can initiate chain reactions causing damage or even death of the cells.

According to the manufacturer, the antioxidants from Vitamin C & E with Rose Hips work to terminate these chain reactions by eliminating free radical intermediates, and inhibit other oxidation reactions.

The manufacturer, Good’n Natural, is an American company headquartered in New York. The nutritional supplements are manufactured in their own facilities and distributed directly to the consumers. They are marketed as high standard and tested products to ensure optimum quality and efficiency.

Vitamin C & E with Rose Hips is a mixture of vitamins.

Vitamin E is a fat-soluble compound which acts as an antioxidant by preventing the propagation of free radicals throughout tissues. However, studies have revealed it does not have a major positive effect in reducing stroke or cancer.

Vitamin C is a vitamin which acts an antioxidant by protecting the body against oxidative stress. It is found in high concentrations in the composition of the immune cells. It is believed to be effective in the treatment of scurvy, lowering the incidence of gout and reducing the risk of stroke. However some of its uses are poorly supported by clinical test evidence and sometimes contraindicated.

3) Does Vitamin C & E with Rose Hips Work and it is Safe?

Vitamin C & E with Rose Hips is a multivitamin supplement. The formula contains Vitamin C and Vitamin E as the only active ingredients.

Vitamin C (also known as L-ascorbic acid or L-ascorbate) is an essential nutrient for humans and certain other animal species. Vitamin C acts as an antioxidant and is necessary for the treatment and prevention of scurvy. Many scientists believe that Vitamin C may be useful in the treatment of a variety of health conditions but the available evidence is far from conclusive, and sometimes even contradictory.

Vitamin C has become popular as an effective treatment for the common cold, and its use has been extensively researched. However, it has not been shown effective in prevention or treatment of the common cold, except in limited circumstances (specifically, individuals exercising vigorously in cold environments).

Vitamin C is well received with very few reported side effects. The most common adverse effect is indigestion, particularly when taken on an empty stomach. When taken in large doses, Vitamin C may cause diarrhea, toxic manifestations, nausea, vomiting, headache, fatigue and disturbed sleep.

While Vitamin C & E with Rose Hips may look appealing for those seeking an affordable multivitamin supplement, the lack of customer testimonials and positive reviews is quite disturbing. We advise our readers to consult with their doctor before taking this supplement.

6) How Much Does Vitamin C & E with Rose Hips Cost?

Each bottle of Vitamin C & E with Rose Hips contains 50 rapid release soft gels, which should be enough for up to 50 days of treatment for the average user.

This product cannot be purchased directly from the manufacturer, but they offer in exchange a store locator feature. The average price per soft gel recommends Vitamin C & E with Rose Hips as an excellent purchase.

The recommended dose is 1 soft gel taken 1-2 times daily, preferably with a meal. The supplement is not recommended for pregnant or nursing women, people under any other medication or preparing for a medical procedure without the healthcare professional’s consent.

Vitamin C & E with Rose Hips is a formula based on 2 active ingredients. It is designed to support the correct functioning of the immune system and antioxidant health.

Vitamins C and E are believed to be powerful substances against oxidative processes. The negative effect free radicals have on the health of cells is widely known and a concerning issue in today’s medicine. Free radicals are molecules produced during the decomposing of food during digestion or by environmental exposures (tobacco, radiations, and smoke). They are believed to be the cause of heart diseases and certain types of cancer.

Even though Vitamin C & E with Rose Hips is a potentially safe dietary supplement, it has not been approved by the FDA. It is our advice to seek the advice of a healthcare professional before starting taking any dietary supplement. 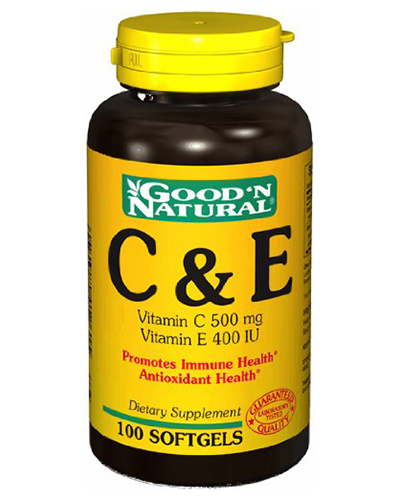 clear
Q:
What are the active ingrediens in Vitamin C & E with Rose Hips?
A:

Q:
What is Vitamin C & E with Rose Hips supplement?
A:

Vitamin C & E with Rose Hips is a multivitamin supplement offered by Good'n Natural. The product is aimed to support antioxidant health and immune system wellness. The active ingredients in the formulation are Vitamin C, essential to the human body and a known antioxidant, and Vitamin E, which also possesses antioxidant properties, and plays a role in preventing inflammation, clumping off platelets and strengthening of the immune system.

Both Vitamin C and Vitamin E are relatively safe to use with very few reported side effects. In fact, many manufacturers are using these two vitamins in their formulas.

Good'n Natural enjoys an excellent reputation among its customers. However, there is a concerning lack of information about this formula. We were unable to find customer testimonials or positive reviews, and some of the company's claims are not supported by relevant clinical studies and researches.

The low price is a good asset for this supplement, and the low costs may convince many customers. However, we advise our readers to focus on supplements that have been thoroughly tested and proven to work.

I purchase the time released version of the Vitamins and take them religiously. Makes ure to get time released otherwise you pee it out. I double up on these per day when I feel a cold coming on and am very rarely sick. I work in a call center so the germs and illnesses flow pretty regularly, but by taking these vitamins I’m not sick while everyone else is.

I use the Good’n Natural Vitamin C with rose hips and love this product. I think it helps me stay healthy with less colds than average. I have been taking a Vitamin C Nature Made with Rose Hips for a number of years and notice the difference if I run out.

The best vitamin C ever. These things helped me through my winter. They cure influenza pretty darn fast! I just popped a few of them in my mouth and BAM! My flu was basically gone. I even recommended these to my friends and my family. They all agree that these Vitamin C are the best Vitamin C’s on the market today.