Emphaplex Review – 8 Things You May Not Know

Emphaplex is promoted as a multivitamin blend meant to sustain the respiratory system by supporting the body’s ability to eliminate respiratory secretions. The dietary supplement was designed and is currently manufactured by Standard Process.

This business was created in the year 1929 in the United States and since its formation has been very popular due to its concern and desire to satisfy the necessities its customers. Nowadays, it manufactures over three hundred products that range from dietary supplements to veterinary formulas. An aspect that differentiates it from other nutritional companies is the fact that they’ve separated their supplements into three major categories that are the following: MedHerb, Standard Process whole food supplements, and Standard Process Veterinary Formulas. This means that they’re focus is on certain bodily areas that require specific amounts of vitamins and minerals. Furthermore, most of their supplements contain antioxidants which are meant to fight damage done by radicals in the body, hence improving overall health.

Emphaplex also has a positive effect when it comes to the central nervous system and cellular energy production. Like most of the Standard Process products, it provides antioxidants that aim to fight against oxidative stress. Furthermore, the manufacturer states that Emphaplex features a mixture of key ingredients from Catalyn Drenamin, Pneumotrophin PMG, Phosfood Liquid and Protefood that should offer rehabilitation to the tissues. One the other hand, because it contains Vitamin A,women who are pregnant or lactating should consult their personal physician prior to following this treatment.

Advertised as a multivitamin blend in combination with a proprietary blend, Emphaplex desires to improve the respiratory system while also offering nutrients for the enhancement of the central nervous system as well as cellular production. A component found in this formulation in high concentration is Vitamin A.

Studies showed that Vitamin A is a vitamin naturally found in eggs, vegetables, and fruits, but it can also be synthesized in laboratories. Most of the times it is utilized by women in order to alleviate symptoms of premenstrual syndrome, vaginal infections, yeast infections, and prevent breast cancer. On the other hand, it may have a positive effect on the enhancement for the nervous system and in some cases treat diseases like Alzheimer’s disease or dementia, as well as nose infections and loss of smell. People are advised to be careful when following treatments based on Vitamin A because it may increase the risk of osteoporosis and hip fracture when normal dosage is exceeded and sometimes even causes side-effects like anorexia, stomach discomfort or nausea on long-term usage.

3) Is Emphaplex Right for You?

Presented as a multivitamin blend with the touch of a proprietary blend, Emphaplex aims to enhance the respiratory system while also providing nutrients for the improvement of the central nervous system and cellular production. An ingredient found in this formulation in high concentration is Vitamin A.

Research has showed that Vitamin A represents a vitamin found naturally in many vegetables, eggs, and fruits, but it can also be made in laboratories. It is mostly used by women to treat symptoms related to premenstrual syndrome, yeast infections, vaginal infections and prevent breast cancer. However, it also represents a useful compound for the enhancement of the nervous system by treating some diseases like dementia or Alzheimer’s disease as well as nose infections and loss of smell. People should be careful when taking supplementation based on Vitamin A because it increases the risk of hip fracture and osteoporosis when taken in high amounts and causes side-effects like stomach discomfort, anorexia or nausea on long-term usage.

Another vitamin with high relevance for this formulation is Vitamin D that can be found naturally in five forms and it is of specific importance to phosphorus and calcium metabolism and absorption in the body. It is synthesized by the human skin when sunlight exposure occurs. Unfortunately, in most of the cases, people develop a Vitamin D deficiency, particularly if they live in areas when exposure to natural sunlight is limited. This shortage usually determines fragile bones and muscle weakness. Moreover, this vitamin also possesses some crucial roles such as helping the brain work in later life, regulating the immune system and maintaining heart health. Some studies detected that Vitamin D could also prevent diseases like cancer, cardiovascular disease, and rheumatoid arthritis.

There are online customer testimonials about Emphaplex. What is being reported includes the following:

6) How Much Does Emphaplex Cost?

Firstly introduced on the nutritional market in 1969, Emphaplex represents quite the expensive supplement for people with average paid jobs. It is produced in the form of capsules that are 90 in number in each bottle. Because the daily recommended dosage is two capsules per meal, a bottle is sufficient for forty-five days of treatment. People may purchase this product either from official manufacturer website or other online retailers. Despite the fact that its price may seem spicy, when bought in larger amounts, there are usually promotions and discounts offered. Furthermore, regular customers can take advantage of particular price deductions for their loyalty.

Other ingredient with high importance for Emphaplex is Vitamin D that can is generally found naturally in 5 forms and it is of particular importance to calcium and phosphorus absorption and metabolism in the human body. Some studies revealed that Vitamin D may also prevent diseases like heart disease, cancer and rheumatoid arthritis.

Advertised as a remedy composed a combination between a set of vitamins and a proprietary blend, Emphaplex aims to improve the respiratory, cardiovascular, as well as central nervous system. It contains vitamins like Vitamin A or E which are known for their properties directly affecting the human body. Although the manufacturer doesn’t state anything regarding potential unwanted side-effects, there are some that may happen because of its ingredients. In addition, because it features Vitamin A, lactating or pregnant women should talk to their personal doctor prior following this treatment because an excess of Vitamin A may endanger their child. 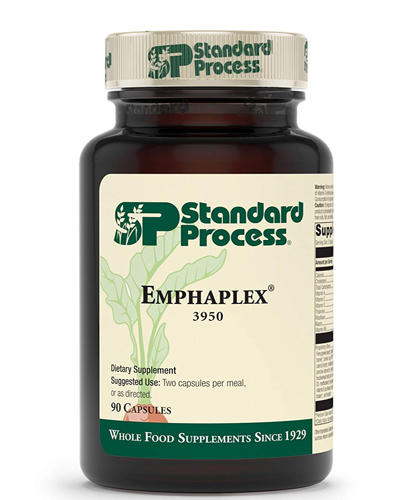 clear
Q:
What are the active ingrediens in Emphaplex?
A:

Q:
Emphaplex is all about what?
A:

Emphaplex is a product of the company called Standard Process and has been released on the nutritional market in 1969. It features a combination between a multivitamin blend and a proprietary blend and is meant to improve the respiratory, cardiovascular and central nervous system. However, there are cheaper alternatives on the market with the same promised results, so people should seek further if they don't want to pay this much for the supplement.

Q:
Are Emphaplex benefits actually a reality?
A:

Produced as a supplement made out of a mixture of a proprietary blend and a set of vitamins, Emphaplex is meant to enhance the respiratory, nervous as well as cardiovascular system. It features vitamins like Vitamin A or D which are known for their importance and positive effects on the human body. Despite the fact that the manufacturer doesn't make any reference regarding possible side-effects, there are some that may occur because of its components. Additionally, because it contains Vitamin A, pregnant or lactating women should consult their personal doctor before considering this treatment. However, there are cheaper nutritional supplements with the same advertised results, so it's better to search for more products before purchasing this one.

It’s true, it’s quite expensive, but I’m a huge fan of the Standard Process supplements so I don’t want to try other remedies. I’m pleased with this one, it made my skin shinier and healthier and I don’t have headaches anymore! What else can a man want?

I believe my lungs are in better condition than they were six months ago. That plus the pneumotrophin should give those with lung conditions would be very wine to investigate these two products.