ALZ Vitamins Review – Is it Effective?

The manufacturer claims this formula contains a combination of individually FDA approved vitamins geared toward to enhance blood flow and reduce plaque buildup in the brain, which is a common physical side effect of Alzheimer’s disease. Nonetheless, this is a combination of nutrients and a cure for Alzheimer’s has not yet been discovered. The benefit claims of the formula are not supported in any way by scientific evidence.

The core benefits of the formula as advertised by the manufacturer include increased energy, clearer thinking, sustained thinking and less confusion. According to the manufacturer, benefits should be visible in several months of use, however for advanced stages of the disease more time would probably be necessary.

ALZ Vitamins is designed for people who wish to enhance their overall brain power as well as for those battling Alzheimer’s.

1) ALZ Vitamins at a Glance

The supplement is a combination of 8 essential vitamins. Vitamin D has actually been directly linked to help Alzheimer’s through its beneficial effects against amyloid plaques, key elements of the Alzheimer’s disease. Apparently, Vitamin D works by activating certain genes and signaling networks which boost the immune system which in its turn clears away a key component of the amyloid plaques. Moreover, several studies showed that elderly people with low blood levels of vitamin D are more likely to show signs of general cognitive decline as well as to manifest declines in their ability to prioritize, organize and plan (so-called executive function).

Similarly, a Vitamin B1 or Thiamine deficiency has been associated to dementia-like symptoms, making scientists believe that it may help in preventing the disease. Although studies are still in their early stages, evidence shows that Vitamin B1 (along with Vitamin B6, Vitamin B12 and Folate) may lower the rate at which the brain shrinks after a certain age, which is one of the causes of dementia.

You can combine ALZ Vitamins with nootropics like BrainStrong Adult‘s Ginkgo and Choline for a more optimal memory blend.

3) What Does ALZ Vitamins Do?

The supplement reviewed is claimed to be a natural composition of vitamins which is specifically designed to address the physical symptoms of Alzheimer’s disease. The manufacturer does not specifically claim that the supplement is the cure for this illness, but rather it advertises the formula as an improvement factor in the user’s condition or even as a preventive factor for the disease.

All the nutrients contained in this formula are known to have beneficial effects on the human body, but further evidence is needed to determine whether the overall product works the way the manufacturer claims it does.

High dosages of Vitamin B3 are said to be able to prevent Alzheimer’s symptoms. Laboratory tests proved that this vitamin is good for individuals suffering from this medical condition, while healthy people who take it may find that some aspects of their memory are improved. Scientists also concluded that the nicotinamide led to a slight enhancement of cognitive abilities in normal mice.

This is the only single dose nonpharmaceutical supplement based on a nutrient blend targeted towards people living with dementia and Alzheimer. For best results, one capsule should be taken daily with food or water.

There are testimonials posted online about the formula. What is being stated includes:

No side effects are mentioned for ALZ Vitamins.

5) Precautions of ALZ Vitamins Use

6) How Much Does ALZ Vitamins Cost?

The average price per capsule makes this product an averaged priced supplement. Still, compared to traditional medicine concerned with healing Alzheimer symptoms, this can be considered a cheap alternative. Also, compared to products similar in ingredient combination, it has good value. Please note that the price of this product can vary from one retailer to another. each bottle contains 30 capsules, enough to last a month should the daily dose not be exceeded.

The supplement can be purchased from the manufacturer’s website or other sources. Discounts and money-back guarantees may be offered.

The recommended daily dosage is 1 capsule of ALZ Vitamins daily. Few consumer reviews are available, making it impossible to draw a general conclusion.

ALZ Vitamins claims to relief physical symptoms of patients with Alzheimer’s. The benefit claim is however difficult to be supported with any scientific evidence, as it is known that a cure to Alzheimer’s has not been discovered. Still, the formula’s ingredients have been researched and promising results exists as far as Alzheimer’s prevention and ability to slow down the evolution of the disease goes.

We could only find a few consumer reviews; therefore we cannot draw a general conclusion towards the formula’s effectiveness. This is why we strongly recommend you talk to a physician before starting using any dietary supplement, including the one being reviewed here. 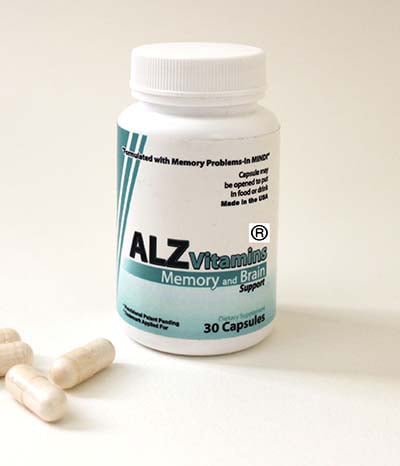 clear
Q:
What are the core ingredients in ALZ Vitamins?
A:

Q:
ALZ Vitamins is all about what?
A:

Alz Vitamins is presented to be a mix of 8 vitamins that aim to assist with the physical symptoms of Alzheimer's disease and dementia. The company that develops and produces this supplement is called Alz Vitamins. The formula includes a rich combination of nutrients, including Vitamin C, Vitamin D3, Vitamin 3 and Vitamin B12, scientifically demonstrated to support brain health, as well as prevent memory problems and attention issues. Alz Vitamins is designed for the use of adults and is a formula developed based on clinical trials results conducted at the Mayo Clinic and Wake Forest University.

It is difficult to say to what extent or if this product is an appropriate solution for patients who report symptoms of Alzheimer's disease and dementia, although the manufacturer mentions certain studies which led to the development of this formula. Additionally, many of the vitamins contained in the product have been proven to have a positive effect on the overall health of the brain, so the supplement may be useful in improving cognitive functions.

The manufacturer provides significant amounts of information on ALZ Vitamins on their official web site, so we advise our readers to investigate the product further before making a purchase.

I heard good things from my neighbour about it’s effectiveness regarding Alzehimer’s disease.

I have tried Focus factor, Procera AVH, and Alz Vitamins for my father which has alzheimers. I saw no improvement what so ever with Focus factor and Procera AVh (side effects with this one, all kinds of complaints even a law suit). I tried Alz vitamins, what a improvement. He remembers short term, remembers to do his daily things. This is the best one I have tried so far. I have tried many others to find no improvement, and always go back to Alz Vitamins. I would give them 10 stars if I could. Great product