BrainStrong Adult Review – Is it Effective?

One of the goals of taking supplements is to remain as healthy and youthful for as long as possible, especially when it comes to brain health and memory.

That is why you can say nootropics were primarily made for adults, as they contain ingredients designed to maintain brain health and improve brain function. One of these is BrainStrong Adult.

BrainStrong Adult is a nootropic designed to support the protection of the brain against cognitive decline caused by aging. The formula is designed for adults of all ages, but seems to particularly target older demographics.

2) The Company Behind BrainStrong Adult

The manufacturing company is i-Health, a division of the global science-based company DSM. i-Health specializes in developing, marketing and distributing of branded products which support a healthy lifestyle.

3) What Are BrainStrong Adult Ingredients?

Ginkgo is one of the world’s most popular nootropics, and it mainly stems from how it’s been cited to help with memory. It primarily works by boosting brain circulation.

The science is, the more efficient brain circulation becomes, the more nutrients and oxygen the brain gets.

The more nutrients and oxygen the brain gets, the better the brain will be at producing brain cells for memory retention.

In the case of cognitive function, the more choline your brain produces, the better.

It works, but with a caveat, and that caveat is how long before you start to feel it working.

Nootropics have a hard time being accepted by many supplement users, primarily because much of the brain nutrients in their blend need to cross the blood-brain barrier, this “filter” the body uses to protect the brain against unwanted chemicals and potentially harmful invaders.

Ginkgo Biloba’s dose is wanting, but some of it might just bypass the blood-brain barrier.

The main concern is choline, specifically because it comes in the weakest, least bioavailable form of choline bitartrate. As bitartrate, you’ll need at least 500 mg for choline to do what it’s intended to do, and that’s not the case we have here.

In 2014, the FTC filed a complaint against i-Health, regarding the claims made from their memory booster. [3] The issue was from their original formula that contained DHA.

i-Health, in an ad, claimed that the DHA content of the original BrainStrong Adult boosts memory, which was based on a clinical study. The problem was, the study provided wasn’t enough to warrant the memory-boosting claim.

7) Where to Buy BrainStrong Adult

BrainStrong Adult recommended use: Take one (1) caplet per day with a meal.

10) Our Final Take On BrainStrong Adult

BrainStrong Adult is marketed as an effective product for the protection of the brain against age-related memory decline. The formula uses the famed Ginkgo Biloba and Choline.

While we do think BrainStrong Adult is good for long-term brain health, we hesitate to recommend it if you want something that can have an effect within two weeks.

The reason being are the doses used for their ingredients. The doses are just too small. By the time they do work, you would have bought more than a few months’ supply already.

There are many nootropics out there with superior potency, so we suggest you give BrainsStrong Adult a pass.

If you really want to buy a high-quality nootropic formulated with high doses, we think you’ll like nootropics such as Genius Consciousness.

There are also many nootropics formulated with children in mind, and one of them is Focus Factor for Kids. 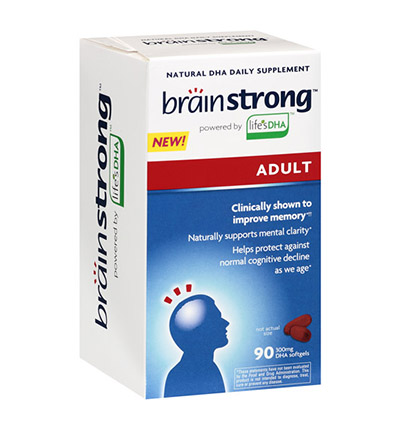 clear
Q:
What are the active ingredients in BrainStrong Adult?
A:

Q:
What is BrainStrong Adult?
A:

BrainStrong Adult is a nutritional supplement that consists Ginkgo biloba and choline.

i-Health claims their product to be highly effective in protecting the brain from cognitive decline, in boosting memory, in supporting clarity, and in improving the overall brain health.

Q:
Where can I buy BrainStrong Adult?
A:

You can buy BrainStrong Adult at Walgreens and iHerb.

Q:
How much does BrainStrong Adult cost?
A:

It can help, but it will take a long time for the effects to kick in given the doses used.

Q:
How should I take BrainStrong Adult
A:

BrainStrong Adult recommended use: Take one (1) caplet per day with a meal.

Q:
How do I contact BrainStrong Adult customer service?
A:

Q:
Who makes BrainStrong Adult?
A:

The company behind BrainStrong Adult is i-Health.

I am allergic to fish so I started using this to get DHA about a yr ago. I didn’t have any side effects. I didn’t notice a sudden change but gradually after about 5 weeks, I was recalling things quicker. I wasn’t forgetting my cell phone or where I put keys. At work,I use a lot of numbers and I kept them In my head longer. This gave me confidence in my abilities, so my energy increased. At one point, I couldn’t find product for a couple of months and I noticed the forgetfulness coming back. I believe this a very good product. Can’t ind the 120 capsules anywhere.

I am always forgetting things but after using it for 2 or 3 weeks it really improved my memory.

I tried to use it but the powerful smell made me feel sick from it. I only used it for 2 weeks and I felt a bit of improvement but like I said I couldn’t stand the smell.

It helped me a lot with my short term memory and I don’t have headaches any more.

plz tell that how does it works and about its possible side effects …..thanks

Please head to the manufacturer’s website for information on benefits and potential side effects. A consult with your healthcare provider would be most appropriate to establish whether this may work for you in particular.

I am trying to find something for my mother to help with her memory. Shehad a stroke about three years ago and her merory is continueing to decline since then. My concern is how Brainstrong with interact with
her prescription medications. SHe is on several different Medications. THank You for your reply

Brainstrong contains DHA, which is generally safe in both children and adults. However, the formula also includes a proprietary blend of L-theanine and Green Tea extract. The Green Tea extract may contain caffeine, and it may interact with your mother’s medication. Therefore, we advise you to discuss this with her doctor (the one who prescribed the medication). Based on her treatment, the doctor is the only one entitled to say if Brainstrong is safe or not.