Superior Brain is one of the many cognitive enhancers offered by the nutraceuticals companies today. The formula is produced by Reborn Labs- a relatively unknown manufacturer who sells about 15 others such products at this time. The company claims to make their products in US facilities following strict GMP quality standards.

Superior Brain is marketed to work on various levels. Specifically, the formula is said to improve memory, focus, and mental clarity while at the same time promoting optimal mood. The active ingredients also have a neuroprotective action which preserves the brain integrity and ensures a more effective brain cell communication. A 100% life-time money-back guarantee is provided by the manufacturer which proves the manufacturer’s own confidence in the quality of their formula.

1) What is Superior Brain?

The product consists in several herbal extracts such as Ginkgo Biloba, St. John’s Wort, Bacopa Monnieri, and Vinpocetine, all traditionally used as remedies for various brain related conditions. For example Ginkgo Biloba and Bacopa Monnieri are commonly described as very effective memory enhancers. Ginkgo Biloba owes its reputation to its excellent antioxidant and blood thinning properties which allow the maintenance of optimal cognitive abilities (such as memory, thinking, and recall ability), and ensure proper oxygenation of the brain and organs. Bacopa Monnieri maximizes neuron communication which also recalls for better memory and thinking. Both Bacopa and St John’s Wort are considered potent antidepressants and are promoted as natural ways to improve mood and maintain mental balance. Vinpocetine is also considered a miracle herb for the brain. It has widely been studied for its effects on this organ and results showed that the plant can improve oxygen flow to the oxygen deprived brain cells (thus preventing stroke), increases blood flow to the brain, and promotes the synthesis of neurotransmitters like Acetylcholine (important for memory, attention, and alertness), Serotonin (the feel good neurotransmitter), and Dopamine.

The formula’s first listed ingredient is a patented form of Ginkgo Biloba which is named Ginkgoxine. Unfortunately the site of the company which trademarked this compound (Avexyl Pharma) is not currently functional. More so, we couldn’t find relevant information about this patented substance, so we cannot say how it is different than common Ginkgo Biloba. What we actually know is that Ginkgo is one of the oldest living tree species on earth and that it has been used medicinally for thousands of years. The plant extract is believed to posses extraordinary antioxidant benefits which make it so important for us humans. Antioxidants are substances known to protect against the action of free radicals. Free radicals are harmful compounds that cause damage to the organs through a process called oxidative stress. Oxidative stress is believed to be the cause of the early aging of organs, including of the brain. This can lead to poor memory, memory lapses, or brain fogginess. Ginkgo Biloba is also believed to improve blood circulation to the brain and promote emotional well-being.

However there have been side-effects associated with the use of this herb such as: nausea, dizziness, headaches, or digestive problems. The risk of bleeding is also increased when using Ginkgo Biloba based products.

Other ingredients included in this supplement play various different roles. St John’s Wort for example is a well–known natural antidepressant. Glutamine, a very abundant amino-acid in the body is a popular energy boosting substance and is also precursor to the neurotransmitter GABA which is closely related to some of the brain’s capacities like: memory, thinking and mood.
All in all, Superior Brain features only ingredients that have been studied for their potential benefits on the brain and cognition and although it is not an innovative product it can be as effective as any other brain supplement out there.

Superior Brain is sold directly through the official site for $20. Amazon.com also commercializes the company’s products but for this particular supplement their current price is slightly higher ($25). And they claim this is a discounted price, the standard cost being $50.

One bottle contains 60 capsules and ensures the necessary supply for 2 months of regular use based on the recommendations of the producer.

7) How to Take Superior Brain

The product also features a popular phospholipid called Phosphatidylserine, commonly recommended for improving memory, treating mood problems or ADHD, and enhancing energy levels. Glutamine is another active substance in Superior Brain. Naturally occurring in the human body, Glutamine is most used as an ingredient of sports nutrition supplements where it is used for its energy enhancing qualities. Glutamine is also a precursor of GABA, an important neurotransmitter required for optimal cognitive performance.

Superior Brain is a common brain supplement. It features several herbal extracts, one amino-acid, the popular Phosphatidylserine and DMAE, another common ingredient marketed as a miracle solution to your memory problems, Glutamine. We have seen similar ingredient list in at least a dozen brain supplements out there, but the reality is that this formula (like many others) is not proven to bring the benefits marketed by its manufacturer. And in the absence of scientific evidence we can only turn to consumer testimonials that can validate Superior Brain’s potency. Looking at these testimonials we noticed most users have experienced some of the benefits marketed for this formula and the general opinion is a positive one.

However, there are also numerous users who admit to have received discounts in return of their “honest review”. From our point of view this can influence the user towards giving a more favorable review, so we’re not sure if their reviews are as objective as should be. 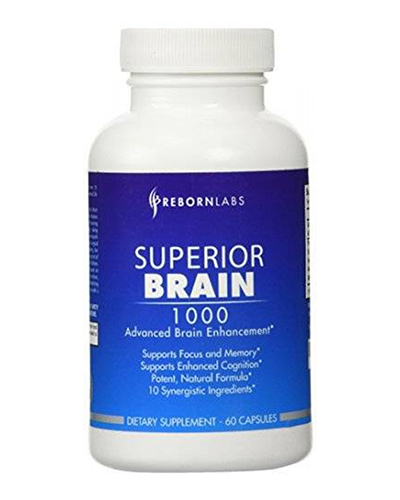 clear
Q:
What are the core ingredients in Superior Brain?
A:

Q:
Superior Brain is all about what?
A:

Superior Brain sold by Reborn Labs is a dietary supplement specifically designed to support cognitive function and brain health. The formula is advertised to improve memory and focus, mental clarity, and mood. It is based on a blend of 8 ingredients out of which 4 are herbal extracts (Ginkgoxine-Ginkgo Biloba, St John's Wort, Bacopa Monnieri, and Vinpocetine). The other ingredients are also popular substances used to promote optimal brain function. These substances are: Phosphatidylserine, DMAE, Glutamine, and Acetyl-L Carnitine and there's plenty of clinical evidence supporting their potential benefits in the cognitive area to motivate their use in a brain formula. Unfortunately there's still a lot of research needed to completely prove the safety and exact effects of these substances on the human body.

Superior Brain formula is available for online purchasing directly from the official site of the manufacturer or through the main online partner Amazon.com. The price listed on the official site is very affordable. A bottle of 60 capsules (which delivers a 2 month's supply) costs only $20.

Q:
Does Superior Brain work?
A:

The formula is not a clinically researched formula so there's no certainty that the specific blend is effective in enhancing cognitive abilities. However we noticed that a large part of those who have used the formula have been satisfied with the results. Regarding the amount of consumer testimonials we cannot say it is very large, but it's not small either. At this time there are around 500 consumer reviews available for online consulting, so feel free to use them so you can make a fully informed decision.