Power Thought is advertised as a synergistic blend of highly advanced nutrients for cognitive enhancement benefits. Bluebonnet Nutrition, the manufacturer of the formula also mentions this is a Kosher certified formula that comes in the form of easy to swallow caplets for increased absorption and assimilation.

Bluebonnet Nutrition is a company founded in 1991 with the purpose of delivering pure and natural nutritional supplements. The company has since received numerous awards for their range of products, which includes prenatal vitamins, brain and eye support, weight management, cardiovascular health products and numerous other food and herbal supplements.

The supplement is formulated for adults who desire to enhance cognitive functions such as memory and focus, as well as to boost mental energy and support mood. Power Thought is gluten and most allergenic substances free, therefore it can be consumed by specific categories of consumers.

1) Power Thought at a Glance

Phosphatidylserine or is a phospholipid component and an important building block nutrient for healthy, functional brain cells, where it is found in great concentrations. For medicinal uses, it is extracted and processed from soy beans. Research so far indicates that Phosphatidylserine can improve mental focus, short-term memory, mood, concentration, coordination and learning and may potentially assist against symptoms age-related decline in mental function (Alzheimer’s disease or dementia).

L-tyrosine is an amino acid with an important role in protein synthesis. Scientists believe that it helps prevent decline in cognitive function in response to physical stress, and that it can influence the synthesis of two important neurotransmitters Dopamine and Norepinephrine. L-Tyrosine is commonly used for depression, ADD (Attention Deficit Disorder) and ADHD (Attention Deficit Hyperactivity Disorder), against stress and to enhance cognitive performance.

3) Is Power Thought Right for You?

Bluebonnet Kosher Power Thought is a complex of vitamins intended to aid memory and concentration.

Vitamin B6 is one of the main components of Bluebonnet Kosher Power Thought. This vitamin plays a significant role in the biosynthesis of four important neurotransmitters: serotonin, epinephrine, norepinephrine and gamma-aminobutyric acid (GABA). Studies have shown that Vitamin B6 deficiency will eventually lead to a seborrhoeic dermatitis-like eruption, atrophic glossitis with ulceration, angular cheilitis, conjunctivitis, intertrigo and neurologic symptoms of somnolence, confusion, and neuropathy.

Another major component of Bluebonnet Kosher Power Thought is Vitamin B12. This vitamin plays a key role in the normal functioning of the brain and nervous system. Studies have shown that it is generally involved in the metabolism of every cell of the human body, especially affecting DNA synthesis and regulation, but also fatty acid synthesis and energy production.

Glutamine is one of the 20 amino acids encoded by the standard genetic code. Although it is not recognized as an essential amino acid, it may become conditionally essential in certain situations.

Ginkgo biloba is also one of the ingredients found in Bluebonnet Kosher Power Thought. This herb has been used for thousands of years and its efficacy in memory enhancement, and circulatory problems have been widely proven in different studies.

6) How Much Does Power Thought Cost?

Bluebonnet Kosher Power Thought is an average priced supplement sold in bottles of different sizes. It can currently be purchased directly from the manufacturer’s website or various online retailers.

Consumes who reviewed Power Thought report effective results in fighting ADD related symptoms, improving mental and physical energy, increased focus and memory capacity and even in eliminating anxiety-like symptoms. No side effects are mentioned for the formula. The daily recommended dose is 2 capsules.

Power Thought is a blend of nutrients designed to boost mental capacity and performance. It contains a standardized extract of Ginkgo Biloba, the L-Tyrosine amino-acid and various vitamins and other nutrients researched and related to brain function and health. The formula’s effectiveness is therefore very probable. Consumers validate the fact that it has numerous brain health effects, not only improving memory and focus, but assisting with specific conditions like ADD.

The formula is Kosher certified, vegetarian and free of allergenic or artificial ingredients, making it a viable choice for vegetarians and other types of consumers with particular needs. Still, as always, we recommend caution and advise you to ask a healthcare provider’s advice before using the supplement. 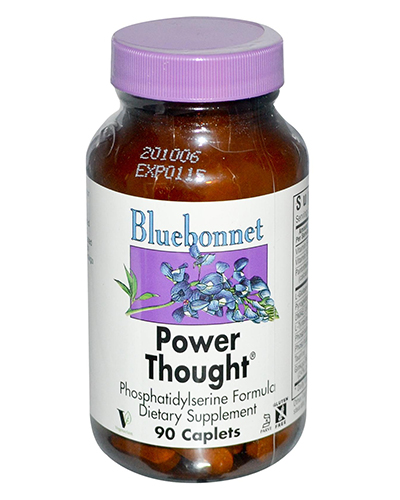 clear
Q:
What are the active ingrediens in Power Thought?
A:

Q:
What is Power Thought?
A:

Bluebonnet Kosher Power Thought is presented as a mix of vitamins B6, B12, amino-acids, Ginko Biloba and other active ingredients aiming to improve mental clarity, cognitive enhancing and memory enhancing caused by aging or mental diseases. Bluebonnet Kosher Power Thought is brought to you by Bluebonnet. This is a very powerful blend of active ingredients and it is sugar and sodium free.

Q:
Are Power Thought benefits actually a reality?
A:

Bluebonnet Kosher Power Thought is a multivitamin brain supplement designed to aid the cerebrovascular system, thus improving memory and cognition. Although, individually the ingredients contained in its blend are important for the body to function at its maximum capacity, there is not sufficient information released to prove the efficacy of Bluebonnet Kosher Power Thought formula as a whole.

they are very good but i`m affraid that the fact that it has taurine might affect me. people should be careful before taking these pills and they should talk with the doctors and stuff so they are sure that the taurine in this product does not have any negattive side effects on them.

i tried it and it works satisfactory, it is indeed a powerful blend