GlyceroPhosphoCholine (GPC) Review – Is it Effective?

GlyceroPhosphoCholine (GPC) is based on the substance with the same name – Glycerophosphocholine. The manufacturer, Designs for Health, manufactures the formula to benefit the brain, kidneys, muscles, testes and other organs. Particularly, the formula will positively influence memory and attention span, cognitive function, mental and physical performance in healthy individuals, coordination, strength and endurance during workouts, liver function and human growth hormone secretion. The active ingredient (GPC) is particularly important to neurotransmitter secretion, and it is through this property that it helps prevent cognitive dysfunctions.

The manufacturing company was founded in 1989 and currently offers nutritional products exclusively to health care professionals and their patients through referral. The company operates FDA inspected facilities, hence ensuring their products comply with existing standards and regulations. They’re also behind the dopamine supplement DopaBoost.

Whereas not explicitly mentioned, the formula is recommended for adults who wish to boost their cognitive capacities in terms of memory, alertness and focus or for people who wish to protect their brain from future cognitive imbalances associated to disease or old age. GlyceroPhosphoCholine (GPC) is also suited for vegetarians.

1) What is GlyceroPhosphoCholine (GPC)?

GlyceroPhosphoCholine (GPC) is a pro-phospholipid found in human cells and in the mother’s milk. Scientists define it as an “activated” form of Choline, as it has an additional phosphate and glycerol group.The substance has a great number of health benefits. It supports metabolic efficiency, during a process in which enzymes combine GPC specifically with the omega-3 fatty acid DHA to create phospholipids (essential components to cell membranes). It is also a highly bio-available source for Choline and hence important for the synthesis of the neurotransmitter Acetylcholine, both related to memory and optimum cognitive function.

GPC is able to easily cross the blood-brain barrier. It has been shown to have numerous benefits on the brain, for young healthy adults, middle aged patients and elderly people affected by some sort of cognitive decline. For instance, a study of advanced Alzheimer’s patients revealed that GPC may help fight cognitive decline which leads to Alzheimer’s or vascular dementia. GPC seems to be safe when used appropriately. However, it can cause side effects in some people such as heartburn, dizziness, headache, insomnia, skin rash and confusion.

This product features a single active ingredient, GPC or Glycerophosphocholine, a pro-phospholipid that can be found in human cells and mother’s milk in significant quantities. This chemical can be artificially obtained from a highly purified soy lecithin and can be manufactured in a laboratory; it is often used in nootropic dietary supplements like this one. This substance has the amazing benefit of rapidly crossing the blood-brain barrier and thus effectively delivering choline to the brain. In Europe, this ingredient is frequently used as a prescription medication that aims to help with symptoms of Alzheimer’s disease. The use of this chemical has been found to help with some other conditions, such as stroke, dementia and can impaired memory, learning, and thinking skills. If used appropriately the substance is considered safe, but there have been reports of side effects like insomnia, dizziness, headache, heartburn, and confusion.

The suggested use for this product is one capsule per day that is to be taken with a meal.

There are online testimonials about GlyceroPhosphoCholine. What is being said includes: Ever since reading the book “Superlearning” some years ago, I have supplemented with GPC to maintain optimal brain activity./ The supplement has improved my memory significantly/ I no longer worry that I might lose my short term memory forever as my mother and grandmother did. What a gift!

5) Precautions of GlyceroPhosphoCholine (GPC) Use

6) How Much Does GlyceroPhosphoCholine (GPC) Cost?

7) How to Use GlyceroPhosphoCholine (GPC)

Consumer reviews are scarce, however those that are publicly available report increased effectiveness of the formula. No side effects are mentioned by the manufacturer. The manufacturer recommends taking 1 or more capsules daily.

GlyceroPhosphoCholine (GPC) is the branded product for the generic GPC, a substance on which many studies have been conducted so far. Scientific studies and clinical trials worldwide validate its wide spectrum of benefits and its ability to assist people of all ages with various health conditions.

The formula’s effectiveness is also supported by consumer reviews, which, although limited in number, praise its ability to assist with memory and attention problems. It is therefore our conclusion that the formula will work and achieve its purpose for some customers.Side effects reported are mild and rare. Still, it is our strong advice you seek the advice of a specialist prior to use. 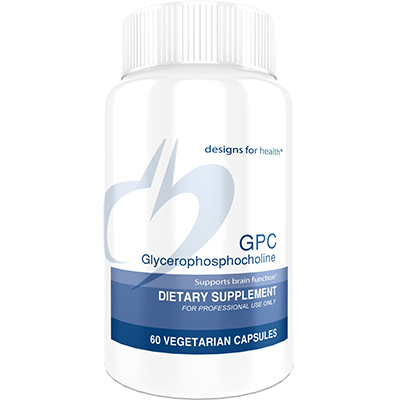 Q:
What is GlyceroPhosphoCholine (GPC)?
A:

Designed for Health GlyceroPhosphoCholine is a dietary supplement designed to provide health support on multiple levels, supporting cognitive function, alertness and concentration. The manufacturing company Designed for Health markets the formula as having a variety of other secondary benefits such as increasing the recovery time for patients with head injuries or strengthening endurance throughout workout sessions. The active ingredient, Glycerophosphocholine, has been quite well researched and demonstrated effective in sustaining brain health.

Designed for Health GlyceroPhosphoCholine is a dietary health product that aims to support several body functions and provide nutritional support for the brain. This product is based only on one active ingredient, which is said to be effective in sustaining memory, learning and can improve physical performance. The manufacturer offers a Certificate of Analysis for the supplement, which attests to its purity. This plus the fact that the manufacturing company has a great deal of experience, we would conclude that this is a potent formulation which can be used with trust. Still, we strongly advocate for a health care provider's opinion before starting use.

This formula is perfect for me because I was searching for both a physical as well as a mental aid. I suffered an accident that left me with some problems, after I finished my therapy so I started searching for a natural way of dealing with my problems and found this formula, which was recommended by my brother. The first three weeks I could just feel the effect regarding brain health, my memory and focus were getting better, but no physical effect manifested. After a month’s use I felt some improvements in energy as well and my physical strength got better.