Carol Bond Vinpocetine is a dietary supplement promoted as a natural memory enhancer. The formula is sold under the Carol Bond Health Foods brand, a family owned company that commercializes and produces nutritional supplements since 1978. Geri-Hi, Dolomite, and CPP Natural protein are a few of their most popular products.

Vinpocetine formula is advertised as particularly designed to treat various cerebral circulatory disorders such as memory problems, motor disorders, or acute stroke. The formula features two active substances: Calcium and Vinpocetine. The producer does not indicate the reason for including a mineral in this formulation but our research revealed that Calcium is also an important chemical for preventing memory loss and blood problems.

Vinpocetine is a popular brain ingredient usually found in combination with other herbal extracts such as Ginkgo Biloba, Huperzine, or Bacopa Monnieri. It is an extract of the periwinkle plant Vinca minor, used for hundreds of years for medicinal purposes including for boosting energy, treating bleeding gums, or healing sores and wounds. Vinpocetine is one of the active compounds in Vinca minor and there are hundreds of clinical trials and scientific studies that support the extract’s benefits in humans. The main benefit associated with the use of this chemical is an improved cerebral circulation which results in better memory even in the elderly, and in prevention of age-related memory impairment. The substance works by causing a dilation of the blood vessels which allows more blood to reach the brain further resulting in better oxygenation and increase of glucose utilization (enhanced mental energy). Individuals living in high altitude regions or athletes who perform in high-altitude locations (skiers, mountain climbers) could greatly benefit from using such a supplement. Studies involving Vinpocetine have shown best results when dosages larger than 30 mg/day were used. This formula delivers a daily amount of 10-20 mg daily, depending on the number of tablets ingested. The maximum admissible dosage is 4 capsules (20mg of Vinpocetine/day).

Vinpocetine is also used in premium nootropics like Focus Factor.

3) What Does Vinpocetine Do?

Carol Bond Vinpocetine is a blend of an herbal extract and a mineral. Vinpocetine is derived from the Periwinkle Plant, which has been associated with ages with enhanced health and wellness, especially for brain health and memory enhancement. Some scientists believe this herbal extract to be effective at relaxing the body’s muscles, which may result in a better circulation throughout the body. As a result of the improved blood circulation, the brain will benefit from the enhanced flow of oxygen and vital nutrients, which are critical for a proper cognitive function.

However, this supplement contains only a small amount of Vinpocetine, while the second ingredient, Calcium, is included in abundance. It is well known that Calcium is a critical mineral, and it is believed to be a vital nutrient for overall health and wellness. But consumers looking to improve their memory and cognitive function may want to choose a supplement that contains more superior ingredients.

The company claims its product is extremely useful in promoting and supporting better concentration, improved mood, mental alertness and better memory. These claims are not backed up by any relevant clinical trials and researches.

6) How Much Does Vinpocetine Cost?

The cost of shipping for this supplement depends on the location. Once the physical address for it is listed, then that can be determined. Additional fees apply for overnight or two-day shipping.

Calcium deficit (hypocalcaemia) has also been shown to be a cause of poor memory. Besides its known benefits for the bone system, Calcium is also an important chemical in the cell signaling pathways. It is also required by nerve cells to release neurotransmitters which are the most important brain chemicals. Neurotransmitters are involved in various processes related to memory, alertness, learning, concentration, sleeping cycles, and mood. Low neurotransmitter levels have been associated with cognitive impairment and emotional imbalance. Calcium is also a co-factor for a number of enzymes involved in blood clotting. However, the amount provided by this formula is significantly lower than the daily recommended intake of 1000 mg/day (in adults). Two tablets of Vinpocetine provide only 84 mg.

Carol Bond Vinpocetine formula is a simple product that features only two active substances classified as generally safe for humans. Vinpocetine has been intensely studied in recent years with little to no side-effects reported in humans. Unfortunately, consumer testimonials about this specific formula are lacking at the time, so its potency is not supported in any way. The formula is available for online purchase on the manufacturer’s official site. It is available internationally, and shipping seems to be free of charge even outside the US territory (in some countries). 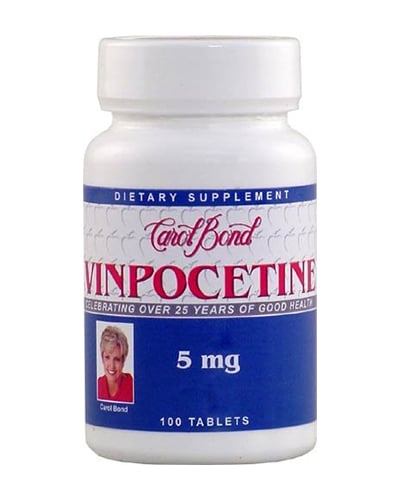 Q:
Vinpocetine is all about what?
A:

The inclusion of Vinpocetine in this formula is a good thing. Vinpocetine is a key ingredient for better cognitive function and enhanced memory. But one ingredient may not be enough to address cognitive problems, especially as we age and begin to experience a gradual decline in overall brain activity.

We believe there are better options out there. We recommend our readers to further research and seek for a product that has been fully researched and that is backed up by some positive testimonials and reviews.