The product is supposed to be side effects free and is subject to a 100% money back guarantee policy, specifically a refund of the purchase price within 120 days from the date of purchase. Also, the manufacturer claims they will refund 100% of the price difference, if the buyer can find the same products at a lower price within 30 days of purchase.

Biogetica is the company which offers this formula. The U.S. based company offers a full spectrum of nutraceuticals, Ayurvedic and homeopathic products for a variety of ailments and health conditions available today.

1) What is T19 Serotonin Dopamine Liquescence?

According to the manufacturer, the formula regulates mood by balancing the levels of chemicals in the brain. These imbalances are often associated with depression, anxiety and other mood conditions. For example, low levels of GABA are known to cause a decrease in serotonin levels, which in turn makes sleep difficult to impossible. Such a person may also exhibit feelings of irritability, lack of rational emotion.

The manufacturer offers little information on the product’s mechanism of action, potential side effects or proof of its effectiveness.

If you prefer a more traditional formula using capsules, we think you’ll like our DopaBoost review.

T19 Serotonin Dopamine Liquescence is a combination of herbs and amino acids. This product is stated to be able to help reduce the various symptoms associated with depression that may be mild or moderate in nature.

According to the manufacturer, T19 Serotonin Dopamine Liquescence can help regulate mood by balancing the levels of chemicals in the brain. Many scientists believe that this unbalances what cause depression. However, the problem may be very complex in nature as each has a different chemical make-up and that means that each may need various forms of assistance with getting their chemicals regulated so that their mood can improve.

According to the producing company, this formula will work by reducing the endocrine disruption that can occur. The product can support a balance in hormones levels, a balance that is linked to mild and moderate depression.

The daily recommended dose of T19 Serotonin Dopamine Liquescence is up to 6 drops placed under the tongue several times a day. It is up to the consumer how often they will use it to help reduce anxiety and to keep the mood being improved. For best results, a person shouldn’t eat or drink anything for 20 minutes before and after taking this supplemental product.

T19 Serotonin Dopamine Liquescence is available in bottles of two ounce each. This is an average-priced supplement. A number of days that it will last depends on how frequently the consumer uses the product. Therefore, it may take some time for a person to know how much of it they need to order.

The cost of shipping on this product varies based on location. Most orders will ship out within two business days of being placed. In the USA there is two day and overnight rush shipping offered for additional fees. Those express shipping choices for T19 Serotonin Dopamine Liquescence aren’t offered in other countries.

7) How to Use T19 Serotonin Dopamine Liquescence

The daily recommended dose is up to 6 capsules, placed under the tongue or as recommended by the health practitioner. For best results, it is recommended that the patient does not eat or drink for 20 minutes before and after taking the supplement.

Depression and other mood conditions are complex and their understanding and subsequent treatment requires an analysis and evaluation of each patient. The possible causes are also highly subjective, since every individual is different. Choosing an appropriate treatment should be proceeded by a correct diagnostic.

T19 Serotonin Dopamine Liquescence claims to balance neurotransmitters in the brain, one of the many potential sources of depression. The manufacturer brings no scientific proof towards proving the product effectiveness. Also, there are no consumer reviews available.

It is our strong recommendation that a healthcare provider is consulted before starting to use the supplement. 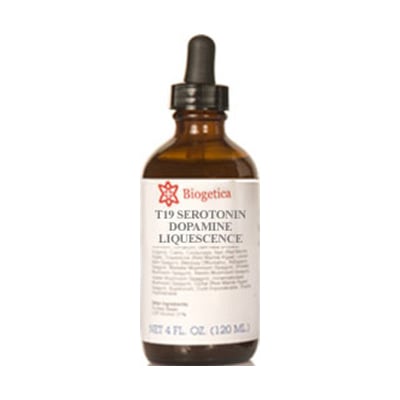 clear
Q:
What does T19 Serotonin Dopamine Liquescence contain?
A:

Q:
T19 Serotonin Dopamine Liquescence is all about what?
A:

T19 Serotonin Dopamine Liquescence is a dietary supplement that aims to reduce symptoms of mild to moderate depression. It contains a mixture of amino acids and herbs that includes Inositol, GABA, Dopamine, Serotonin and Valerian extract. The supplement reduces endocrine disruption and balances hormone levels that occur in those suffering from depression. The company that offers T19 Serotonin Dopamine Liquescence is Biogetica.

There is little information about this product. Also, we were able to find only several testimonials during our online research. The lack of clinical evidence to support the Effectiveness of T19 Serotonin Dopamine Liquescence is also concerning.

However, the formula appears to contain the right ingredients, and we advise our readers to research further into it.

T19 seemed to have a different approach from other depression supplement so i bought it a few weeks back, but im not seeing improvement so far. I;ll finish the bottle and then see…

I have been suffering from mild depression for over a year now and haven’t taken any prescription medication so far. I’m still trying supplement like Y19, but none of them seem to work.

I had a brain injury and talking to others with brain injuries it appears our serotonin isn’t the same anymore. This product has lifted me out of depression, is easy to take and reasonably priced. I would rate it a 5 star, but the app appears to have a bug to only allow a 3 star rating.

I took my first dose and it made a HUGE difference in my low dopamine,
low serotonin symptoms and depression. As I continue to use it, the
symptoms discipate more and more. I am taking 5htp, SAME and some others for neurotransmitters, but this formula is making a big difference. I would rate 5 stars, but
can’t seem to do that with the stars..

I want to order 4 bottles of Serotonin Dopamine Liquescence please. How do I do that? Please let me know.

T19 Serotonin Dopamine Liquescence is available online (i.e. Amazon) or you can purchase it from Biogetica’s official website ($39.00).

I’m battling suboxone withdraw on purpose and ordered this to help me out of the depression it causes.. it stops dopamine for a long time. These drops are amazing…I felt better after 1dropper full….I’m taking it slowly because it’s safer…but I am much more focused and haven’t used suboxone the same..intravenous in 2 days and none today. Just the drops and Neurontin, and I’m feeling much better psychologically! All chemical makeups are different, but to me, it’s very effective. I hope this helps someone suffering as I have for seven years! I’m fighting a hard battle and determined to win!