Clarocet Junior Review – Is it Effective?

Clarocet Junior is a natural remedy offered as a support for several wellness concerns affecting children such as: difficulty in concentrating, lack of focus, irritability, and other mood disorders caused by stress, reduced attention span, and hyperactivity (like nervous tension, anxiety or occasional nervousness).

The product is one of the five Clarocet formulas designed to restore emotional wellness and balance for its users.

The manufacturer is an American company called Medicor Labs headquartered in Texas, USA. They have been manufacturing and delivering biologically-based complementary and alternative medicines since 1997. The company claims to exclusively provide clinically researched formulations which use natural raw materials of the highest quality and purity. In addition, the company claims that all their formulas included in the Clarocet line are manufactured following current GMP (Good Manufacturing Processes) standards and guidelines. Medicor Labs distributes their supplements internationally, in over 100 countries.

Clarocet Junior is especially designed for children with ages between 7 and 13 years old. It is marketed as a gentle and natural support for parents who desire to maintain or restore the emotional balance of their children. Clarocet Junior is also suitable for children with memory and attention problems and those suffering from conditions such as OCD (obsessive Compulsive Disorder).

1) Clarocet Junior at a Glance

Clarocet Junior is an herbal and other nutrients based remedy, containing several well-known plant extracts.

Bacopa Monnieri is an Ayurvedic medicine originated from India used as anti-depressant, a nerve and heart tonic, anti-allergic, and anti-oxidant. It is considered a very powerful natural brain tonic with the ability of increasing resistance to both physical and emotional stress. Bacopa also has the ability to increase mental alertness, focus, recall and memory, and to promote mental relaxation (reducing mental fatigue, anxiety, inability to focus and stay focused, and amnesia).

German Chamomile Flowers is a plant used as a therapy against restlessness, sleeplessness, nervous diarrhea, travel sickness, ADHD, stomach ulcers, and to promote mental and physical relaxation in general. It is considered safe for most users and benefits of the GRAS (Generally Recognized as Safe) status in the US. It may rarely cause allergic reactions for those sensitive to Asteraceae/Compositae family.

3) Is Clarocet Junior Right for You?

Clarocet Junior is an herbal based remedy, which also features nutrients such as GABA and Acetyl-L-Carnitine.

GABA is a neurotransmitter known for its inhibitory properties. This means that it works to prevent the over-firing of nerve cells and this way to promote calmness. The most common therapeutic uses include numerous moods such as bipolar disorder or depression, conditions generally characterized by low GABA levels. The benefits of GABA supplements (as opposed to naturally produced GABA) are not scientifically demonstrate, but quite the contrary, as numerous studies seem to indicate it does not have the same effect.

Bacopa Monnieri or Brahmi is an Ayurvedic medicine, the traditional Indian system of medicine, where it was used to strengthen the mind and the body. Today, Bacopa may be found in a myriad of ways, including as an adaptogen, as anti-allergic, as an anti-depressant, and as an anti-oxidant. Human and animal studies support its claimed anti-anxiety and anti-depression properties, its memory-enhancing effect, and its antioxidant and adaptogenic (anti-stress) benefits.

Passion Flower is a woody vine used as an active ingredient in products designed to promote emotional balance. Passion Flower acts as a sedative on the central nervous system. In the U.S.A, the plant is classified as GRAS (Generally Recognized as Safe). This title is given by the FDA to those substances which have a long history of common use in foods and are scientifically proven as safe for consumption without harmful side effects.

The formula also provides its users with a complex of blend of B vitamins, Calcium, Magnesium and Zinc necessary for a healthy development and maintenance of cognitive function.

The formula contains artificial flavors and preservatives. The product comes as orange-flavored crushable tablets which provide its benefits for an extended period of up to 8 hours.

There are testimonials posted online about Clarocet Junior. What is being stated include:

This supplement can be purchased in bottles of 60 tablets. The manufacturer offers the formula for a trial period of 14 days in order to determine if the formula is effective for the consumer. The price for the trial dose is only $1. The consumer also benefits from a return policy extending on a period of 60 days from the purchase. A bottle may be sufficient for a month’s supply (if a medium dose of 2 tablets daily is consumed). For a maximum dose of 4 tablets per day, the cost for a month’s supply is approximately $70.

7) How to Take Clarocet Junior

The suggested dose is of Clarocet Junior is 1 tablet daily for the first week. For maximum benefits, the tablet should be swallowed or crushed and mixed with food, not chewed. It is recommended that after taking the tablet a quantity of 8-10 ounces of water is drank. Depending on the severity of the disorder and the effectiveness of the treatment, the dose may be increased to 4 tablets per day. The manufacturer recommends keeping a rigorous schedule during the administration of this supplement. Side effects mentioned include allergic reactions, headaches, dry mouth or UV sensitivity.

Clarocet Junior is a natural remedy which comes as a support for the mental and emotional balance of children. It is advertised as a safe and subtle support for those who are interested in improving certain aspects of the emotional well-being of their children, attention span and mental sharpness, concentration capacity and an optimal cognitive function. It is also helpful in relaxing anxious, moody and irritable children. However there is no evidence that whole formula was involved in any scientific study. In addition, being a dietary supplement, it is not FDA approved. In these cases and considering it is a product addressed to children it is always advised to inform the healthcare professional before starting a treatment. 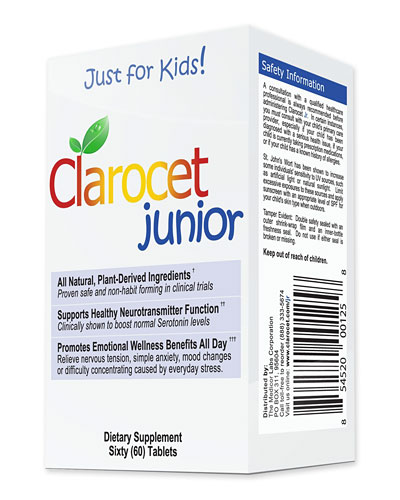 clear
Q:
What are the Clarocet Junior ingredients?
A:

Q:
Clarocet Junior is all about what?
A:

Clarocet Junior is especially formulated to address the need of children between 7 and 14, particularly to treat focus, attention, and concentration issues, to calm over-active behavior, nervous tension, anxiety, and to address mild to moderate depressed mood triggered by stressful situations. The formula is created by Medicor Labs Corporation and contains a combination of botanical extracts (Passion Flower, Valerian, etc), minerals (magnesium, zinc, etc), and other nutrients designed to nurture and protect the nervous system. Clarocet Junior is claimed to determine an immediate response (up to 30 minutes after administration).

Clarocet Junior is a natural remedy which comes as a support for the mental wellness of children. The formula's suggested use is of 1 tablet daily for the first seven days taken during meals with 8-10 ounces of water. Depending on the severity of the disorder affecting the child the dose may be increased up to 4 tablets daily. Consumer opinions usually support the formula's Effectiveness in alleviating symptoms of anxiety, OCD, and mood changes. The product is marketed as a scientifically based, but there is no scientific report available to support these claims. Moreover, this is not an FDA approved formula and hence we recommend caution.

Jessica is 12 and sometimes she gets all depressed and fatigued, especially in the afternoon. School has been a serious issue because of that, but with Clarocet Junior it’s getting better. She’s more energized and positive.

My oldest son suffers from concentration problems, undiagnosed so far. I’ve tried many supplements and even prescription medication, but I love Clarocet Junior because it has no side effects, it is safe and seems to work.