SeroSyn Review – Is it Effective?

SeroSyn has been advertised as a dietary supplement that has the desired effect of providing its users with a calm and positive mind state.

Metagenics is the name of the business that developed and manufactures this formula, being a business that has an international status. This company was established in California, United States in 1973, but now has offices in several countries like Belgium, the Netherlands, New Zealand, Australia, and Canada.

On the manufacturer’s web site, this product has been presented as being designed to promote a positive mood and also provide a restful and relaxed state of mind, helping with the metabolism of serotonin. This product was made using ingredients that have been known to support specific neurotransmitters, having positive effects regarding cognition, mood and stress levels as well. The calming effect it provides is obtained through the production of GABA and serotonin, which it supports; it also promotes an antioxidant effect as well as an adaptogen one. This formula is suggested to be stored in a cool and dry place, as well as away from the reach of children. SeroSyn is also presented as a gluten-free product that also does not use any animal source ingredients, thus being a vegetarian-friendly formula.

This blend of ingredients forms a multi-vitamin formula that contains herbs, vitamins and amino acids.

Asian Ginseng is one of the active ingredients that can be found in this formula, being a plant that has a root often used as medicine. This ingredient has been most commonly used because of its effects that support the health of the nervous system, being effective in supporting thinking, memory, concentration, and working efficiency. This plant is also used as an adaptogen, providing a positive stress response. If taken for periods that are shorter than three months, this ingredient is considered safe, but some side effects have been known like insomnia, high blood pressure, dizziness, rashes, or breast pain.

One other active ingredient is Folate, a water-soluble B vitamin that has several therapeutic effects. This ingredient has been found to be helpful with conditions like Alzheimer’s disease, depression, and sleep troubles as well. There have been some reports of side effects like cramps, diarrhea, nausea or sleep disorders.

The manufacturer states that this formula is not to be used by pregnant or nursing women, as well as by people that are under 18 years of age.

Metagenics also has another calming formula, but designed with the heart in mind. Check out our Serenagen review to find out if it’s the right supplement for you.

3) Is SeroSyn Right for You?

This product is a multi-vitamin blend and mixes several B vitamins with herbs and an amino acid.

An active ingredient in this blend is Folate, which is a water-soluble B vitamin that can be found in several foods like bananas, melons, beans, mushrooms or yeast. This ingredient is used by women that are pregnant or planning on being pregnant as to prevent miscarriage as well as neural tube defects. This vitamin also presents with a series of effects that support the health of the nervous system and is said to be effective with several conditions, such as Alzheimer’s disease, nerve pain, depression, or sleep problems. There has been found evidence suggesting that low levels of folate can be detrimental to mood and have been associated with depleted levels of serotonin. If taken in proper doses this ingredient has been deemed safe, but high doses can present with side effects like cramps, rash, diarrhea, sleep disorders, or nausea.

One other ingredient that has an active role in this blend is Asian Ginseng, which is a plant that presents with a root that is used to make medicine. This ingredient is most commonly used for its effect that regard the nervous system, being found to improve thinking, concentration, memory as well as work efficiency. This plant has also been observed to be effective in dealing with depression and also presents with an adaptogen response that deals with stress. This ingredient is said to be safe if taken for less than three months, but it can have several side effects like insomnia, breast pain, high blood pressure, rash, or dizziness.

The manufacturer recommends a dosage of one capsule that is to be taken three times per day.

This product is not to be used if under 18 and if pregnant or nursing.

6) How Much Does SeroSyn Cost?

The manufacturer provides two size options for this product, one of a container that presents with 30 capsules and another that presents with 90 capsules; at the suggested use of three capsules per day, the small container provides just a ten day supply, while the large one provides a full month’s supply. The price for this product is high, and there are not mentions of a free trial program or money back guarantee. This product is available for purchase from the manufacturer’s website only with a code that can be obtained from partner healthcare practitioners, or it can be acquired from several online and physical retailers.

The suggested dose of SeroSyn is of one capsule three times per day. SeroSyn is available for purchase intwo different sized containers, one that holds 90 capsules and another that holds 30.

SeroSyn is a dietary health product that comes in a capsule form, which is vegetarian-friendly and aims to provide mood-enhancing effects. The ingredients used have been well researched and provide a potent and safe effect, this formula being a multi-vitamin blend. The manufacturer’s suggested use is of three capsules per days and one small container lasts for ten day, while the large one provides a one month supply. There is a warning stating that this formula is not to be used by pregnant or nursing women and by people under 18. This product can be purchased from the manufacturer’s web site only with a code, but is also available from a range of online retailers. 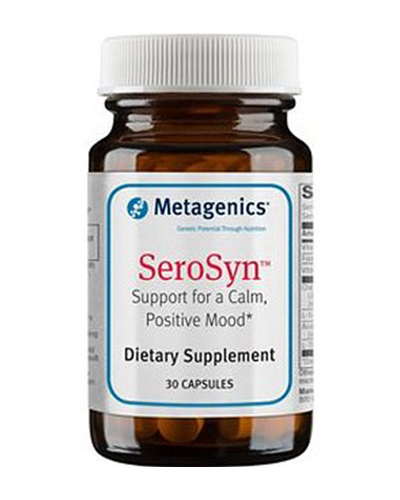 clear
Q:
What are the SeroSyn ingredients?
A:

Q:
What is SeroSyn supplement?
A:

SeroSyn is a dietary health product that has been designed to provide its users with a positive and calm mood. The manufacturing company is a United States business called Metagenics, which was established in California in 1973 and now has offices all over the world, manufacturing a large range of supplements and medical foods. This formula blends together ingredients that form a multi-vitamin product, which has an adaptogen response that helps deal with stress and influences mood in positive way; the ingredients chosen do not have animal origin, thus making this product suitable for vegetarians.

SeroSyn is a vegetarian-friendly dietary health product that represents a multi-vitamin blend of ingredient that has been developed with mood-enhancing properties. The ingredients are chosen to make this formula have been researched and also present with some general health benefits as well. The manufacturer is an international business that presents with facilities that have several good practice certificates. The price of this formula is quite high, and there are no mentions of a free trial program or money back guarantee. This product is available for purchase from the manufacturer's website and forms a range of online retailers as well.

My brother first started to use this formula and after seeing changes in its mood I started as well. I can say that just after two months I has a totally different state of mind, I was more calm and that helped me focus better.

After my wife left me, I used to spend my days inside the house on my computer, that’s how I found out about this product and saw that it has positive reviews. I decided to purchase it and quickly found out that it really has positive effects. I now am more relaxed and outgoing than ever.