DHEAbsorb is advertised as a dietary product which was particularly created to maintain energy levels during the day by normalizing the functioning of the adrenal gland. In addition, it positively affects mood and because of this, potential emotional imbalances caused by lack of sleep, stress, or unhealthy diet are to be minimized. The business behind this remedy is called Botanic Choice.

The company was built by a Joseph E. Meyer in 1910. Since his death, his grandson David Meyer and great-grandson Tim Cleland took control of the business. On the other hand, it was only in 1990 that they began to specialize towards nutritional supplements meant to either impact the entire body or just specific areas such as heart, liver, or weight management.

DHEAbsorb is based on a single ingredient which is in fact a hormone that even though naturally manufactured by the organism, it can be obtained with the help of a substance called disogenin usually found in wild vams or soy. Individuals often require it after twenty years of age when the levels in the body begin to lessen, thus potential medical issues may appear. It is important to maintain its consumption with recommended parameters in order to avoid possible damage.

1) What is Botanic Choice DHEAbsorb?

Promoted as a natural product that seeks to enhance resistance regarding radical damage, energy levels, immunity and the proper functioning of adrenal gland, DHEAbsorb is suggested for people of older ages that are dealing with DHEA level decline. Moreover, the interest linked to this type of supplements bloomed after research revealed that this component is linked to the apparition of some medical problems like osteoporosis, breast cancer, heart disease, and type-2 diabetes.

Despite the fact that studies conducted so far are inconsistent when it comes to the relationship between this ingredient and anti-aging effects, there are plenty of people who believe in its usage and regard it as a positive influence. For example, there are some older men and women who take it to improve bone mineral density which is one of the common causes of osteoporosis and osteopenia. In addition, there is some research that supports these properties.

3) Is Botanic Choice DHEAbsorb Right for You?

Advertised as a natural product meant to improve energy levels, resistance towards radical damage, immunity and adrenal gland functioning, DHEAbsorb is meant for individuals of older ages who are dealing with DHEA decline. Furthermore, the interest towards this type of remedies bloomed after some studies pointed out that this ingredient is directly linked to the development of certain medical conditions such as osteoporosis, heart disease, breast cancer, and type-2 diabetes.

Even though the research which has been conducted so far didn’t reveal close links between DHEA levels and anti-aging properties if delivered in a supplementation form, there are plenty of people who believe in it and use it on a daily basis for this purpose. For instance, some older women and men consume it to enhance bone mineral density which is a cause behind conditions like osteopenia and osteoporosis. Additionally, there are some studies which support these properties. Moreover, in some situations, this component has the property of helping men achieve an erection if sexual dysfunction is involved. According to a trial led in 2000 in which 442 men were tested, there was a specific relationship between erectile dysfunction and DHEA levels until age sixty.

On the other hand, the amounts taken on a regular basis from this hormone are of high importance, and if any harmful side-effect is noticed, the utilization should be immediately interrupted. The most common side-effect of its consumption is acne. However, others such as hair loss, fatigue, insomnia, and abdominal pain may occur. Furthermore, interactions with medications such as Insulin, Lithium, allergy medication, and corticosteroids may appear.

There are online customer testimonials about DHEAbsorb. What is being reported includes:

5) What You Need to Know Before Taking Botanic Choice DHEAbsorb

6) How Much Does Botanic Choice DHEAbsorb Cost?

This supplement comes in an easy-to-dissolve tablet form. The tablets are packed into bottles and each features sixty. Because the daily suggested intake is of one per day, a bottle should last for up to two months. It is important not to exceed this dosage in order to prevent apparition of unwanted effects.

Unfortunately, the manufacturer ships this product only within the United States territory. On the plus side, its price is low and can easily be afforded by anyone. If the purchase expands over two bottles, there are additional discounts offered to the customers. If Auto Refill Program is also used, the shipping costs drop noticeably.

However, the quantity consumed on a daily basis is very important and people should be careful if they want to take it in a supplementation form because some side effects may appear. The most common DHEAbsorb side effect is acne, but others like hair loss, insomnia, and fatigue may also appear. Moreover, interactions with medications including Insulin, allergy medication, corticosteroids, and Lithium may happen.

Relying on the effects provided by a hormone produced in the adrenal gland, DHEAbsorb’s core target is to balance levels of this ingredient within the organism, as its name point out. Due to these properties general health is to be improved, thus people who are under the treatment may avoid inflammations and infections determined by fungi, bacteria, and viruses. Additionally, the energy is boosted so people should feel more vivid and happy.

However, people suffering from diabetes or allergies are advised to consult a personal physician before beginning this treatment. Most of the customer testimonials found online revealed positive results. 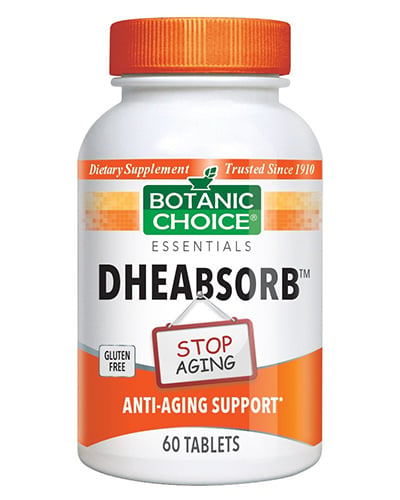 clear
Q:
What does Botanic Choice DHEAbsorb contain?
A:

Q:
Botanic Choice DHEAbsorb is all about what?
A:

DHEAbsorb represents a dietary remedy meant for people of older ages who are having troubles when it comes to maintaining proper DHEA levels in their bodies. It was designed by Botanic Choice, a well-known company on the U.S. ground and comes with a money-back guarantee. By balancing amounts of its only ingredient in the organism, mood, immunity, and the cardiovascular and nervous systems are positively affected. Furthermore, the energy levels are boosted so people can feel younger.

Based on the effects of a steroid hormone produced by the adrenal gland, DHEAbsorb's main purpose is to balance the DHEA levels within the organism, as its name suggests. By doing this, it should help individuals enhance their energy on a daily basis and also achieve a better protection against viruses, bacteria, and fungi. On the other hand, there may be some unwanted reactions which can occur if the utilization is not followed according to the labels. Furthermore, people who diabetics or allergic should consult a personal doctor before beginning of this treatment. Its manufacturer does not provide International shipping of this supplement.