Rhodax Review – 8 Things To Look For

Rhodax is designed to provide positive support for mild mood changes and relief from everyday stress and anxiety. The product is a dietary supplement produced by Pinnacle, a company on which not many information are available unfortunately.

The supplement’s mechanism of action is through the Rhodiola Rosea plant extract on which the formula is based. Although no clinical trials are provided by the manufacturer to support the benefit claims, numerous placebo-controlled, double-blind clinical trials demonstrated that Rhodiola can increase general well-being, reduce mental fatigue and improve learning and memory. The plant is relatively new in U.S, but is very popular in the Soviet Union where it has been used for decades as an energy booster.

Rhodax is useful in managing the day-to-day stress and anxiety related symptoms. The production has been discontinued by the manufacturer, for unknown reasons.

1) Rhodax at a Glance

The product is a dietary supplement recommended to people suffering from temporary depression, stress or anxiety. The manufacturer claims the formula is based on a high quality Rhodiola Rosea root extract The substance has adaptogenic properties, particularly it helps the body adapt to stressful situations.

Rhodiola is believed to work by making serotonin precursors (tryptophan and 5-HTP) more available in the brain and optimizes the amount of serotonin, dopamine and other mood-related neurotransmitters in the brain. Clinical tests showed a positive therapeutic effect as an anti-depressant.

Evidence shows that Rhodiola Rosea may be effective for improving mood and alleviating depression. Several clinical studies appear to suggest that this plant is improving mental and physical performance and may reduce fatigue.

Many scientists believe this plant works by modifying the dopamine and serotonin levels due to monoamine oxidase inhibitor and its influence on opioid peptides such as beta-endorphin. However, its complete mechanisms of actions are not clearly documented. Rhodiola Rosea still is under clinical research.

This plant is well tolerated. However, several mild side effects have been reported. They include nausea, dry mouth, constipation, irritability, and headaches. Due to the lack of relevant studies, women who are pregnant or nursing are advised to avoid this plant.

There are customer testimonials online about Rhodax. What is being reported includes the following:

5) What You Need to Know Before Taking Rhodax

6) How Much Does Rhodax Cost?

The overall price-per-capsule is what makes Rhodax a good deal. Each bottle contains 60 capsules, enough for one month of treatment for the average user. Rhodax is an inexpensive supplement.

7) How to Take Rhodax

The suggested use is one capsule prior to breakfast and one prior to lunch (on an empty stomach). Although the producer does not mention any side effects associated to Rhodax, it is worth mentioning those commonly associated with the formula’s main ingredient Rhodiola Rosea: insomnia, restlessness and irritability. Some less likely side effects, but more serious, include heart palpitations, mood swings and the shakes.

Rhodax is a herbal dietary supplement. Although the product itself has not been clinically tested, the main ingredient (the Rhodiola Rosea root extract) has been researched and has been proved efficient in the stress and anxiety relieving areas of action. The plant has been extensively researched and successfully used for many years in the Soviet Union, and only recently introduced to the U.S. market.

There is a list of side effects associated to the Rhodiola extract that consumers should be aware of, even though these side effects are not listed as such for the product undergoing the review.

All in all, consumer reviews are generally positive. 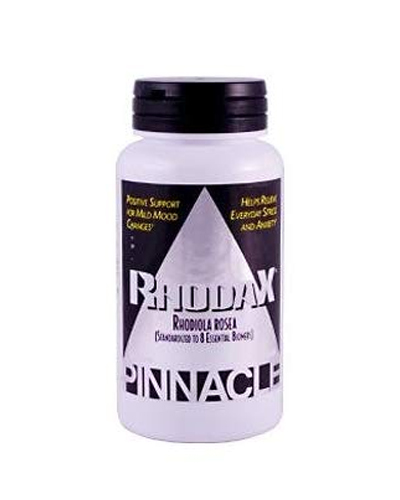 Q:
What is Rhodax supplement?
A:

Rhodax is an herbal supplement based on Rhodiola Rosea, a plant which has positive effects on the brain with regards to symptoms of GAD – generalized anxiety disorder. Rhodax supplement is manufactured by Pinnacle and also includes ingredients such as Acetylrhodalgin, Magnesium Stearate and Microcrystalline Cellulose. Rhodax should be taken twice a day on an empty stomach. It should be noted that some of the side effects of Rhodax are irritability, nausea and headaches.

Q:
Are Rhodax benefits actually a reality?
A:

Rhodax has been on the market for many years and has received many positive reviews and testimonials, which are two crucial elements in giving it a high rating.

However, we rated it so low due to the lack of provided information. While Rhodiola Rosea root extract's properties are well known, we know very little about the overall Rhodax formulation. We always advise our readers to seek supplements that have been fully researched and proven to work.