Mind Matrix-Mind, Mood & Memory is a product that improves the mental performances of people taking it, increasing their capacity to focus, their mental clarity, sharpness, their concentration and attentiveness. It is produced by Healthy Choice Naturals, a US-based company that focuses on providing natural remedies for a large variety of conditions, wanting to improve the general health and well-being of its customers through quality formulas.

Mind Matrix-Mind, Mood & Memory is advertised as a natural and healthy alternative to sugars and caffeine, keeping the mind alert and well-functioning even when under stress or fatigued. Mind Matrix- Mind, Mood & Memory is considered particularly helpful for individuals that frequently have difficulty concentrating or remembering things, and can provide an extra edge to students or people that have to perform intense intellectual activities.

Healthy Choice Naturals claims that Mind Matrix-Mind, Mood & Memory uses an unique formulation based mostly on herbal extracts, or their derivatives. The formula’s main action is that of an antioxidant, primarily due to the Ginkgo Biloba extract. This plant has been heavily researched throughout the past few decades, and its qualities as an antioxidant have been thoroughly proven, making it a first choice for most people trying to increase their cognitive abilities and preserve their mental youth.

Phosphatidylserine is a substance that was initially extracted from bovine brains. It has potential to reduce neurodegeneration, and is undergoing testing as a potential treatment for senility and dementia. Unfortunately, there is no hard evidence that it provides any benefits to the human brain.

A very potent nootropic, Vinpocetine is commonly prescribed to people suffering age-related cognitive disabilities. It is a derivative from the Periwinkle extract, and is also used as a vasodilator, and to boost memory and concentration.

Similarly, all the other ingredients have been used, either in traditional or modern medicine, to boost cognition or preserve mental youth, making the product claims believable. Unfortunately, the manufacturer does not specify why this combination of ingredients should prove more potent than others, and, without proof of clinical testing, it is difficult to assess the product’s efficiency.

3) What Does Mind Matrix-Mind, Mood & Memory Do?

This product is composed of eight ingredients that should provide the nutrient necessary for a healthy brain. One of these ingredients is Ginkgo Biloba, generally used in brain enhancement products. Ginkgo Biloba represents an extract from the leaves of the ginkgo tree, which is known for being the world’s oldest living tree. It has been used for thousands of years for its therapeutical properties in China. Among its properties, there is an enhancement of memory and contribution to the improvement of cognitive performances and functions. However, there are reported side effects to the usage of products based on Ginkgo Biloba. The side effects include stomach upset, nausea, diarrhea, dizziness and headache.

Another ingredient of Mind Matrix- Mind, Mood & Memory is Bacopin, which is thought to support memory and concentrations. Bacosides are chemicals, naturally occurring in the body and represent the active ingredients of Bacopin. They are thought as beneficial in helping fortify kinase, which is the protein found in the body that replaces worn-out neurons with new ones. There have not been significantly reported side-effects of the usage of Bacopin supplementation.

There are online customer testimonials. Among these, the majority claim that the product is:

4) What Mind Matrix-Mind, Mood & Memory Does?

6) How Much Does Mind Matrix-Mind, Mood & Memory Cost?

Mind Matrix- Mind, Mood & Memory is found on manufacturer website or some other online retailers at affordable prices. When bought in larger quantities, the retailers offer significant discounts and even promotions. The product is sold by bottles containing 30 capsules, and a bottle is enough for a 30 days treatment.

Mind Matrix-Mind, Mood & Memory may pose dangers to small children, nursing and pregnant women, and people suffering from circulatory diseases. The recommended dose is one capsule daily, taken with a meal.

There are many manufacturers that advertise that their products perform better than all the others, due to their unique formulation. Healthy Choice Naturals is one of such manufacturers, claiming that their herbal extracts and carefully-selected ingredients place them above their competition. Unfortunately, the ingredient formulation of Mind Matrix- Mind, Mood & Memory is not unique, similar or identical products being easily found on the market.

While Mind Matrix-Mind, Mood & Memory isn’t unique, it seems to be very effective, if we take into account the customer testimonials. Reports of dramatic improvements in concentration, higher grades, and better job performances can be found among these testimonials, backing up the claim that Mind Matrix- Mind, Mood & Memory is a good choice for people looking to improve their cognitive capacities. 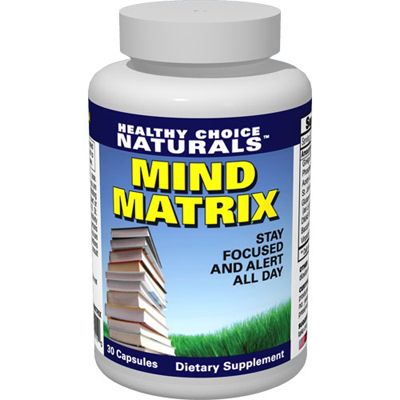 clear
Q:
What are the active ingrediens in Mind Matrix-Mind, Mood & Memory?
A:

Q:
What is Mind Matrix-Mind, Mood & Memory supplement?
A:

Mind Matrix is a dietary supplement manufactured by Healthy Choice Naturals and is presented as a comprehensive formula for mood, memory and concentration. The main beneficial effects of Mind Matrix should be improved memory, focus, better mood and increased alertness, among others. Also presented as a natural formula, Mind Matrix includes ingredients such as: Ginkgo Biloba extract (included for its benefits on the blood circulation), L-Glutamine, DMAE and St' John's Wort extract.

Mind Matrix- Mind, Mood & Memory is advertised as a memory enhancer product. Due to its eight main ingredients that allegedly improve the concentration and memory, it may represent an alternative for people who want to improve from this point of view. However, this product should not be used to cure depression due to the fact that St.John's wort, one of its ingredients, is not a proven therapy. Some people can experience side effects from taking St. John's wort. The most common side effects include dry mouth, increased sensitivity to sunlight and fatigue.

All in all, due to its affordable price and excellent customer testimonials, Mind Matrix- Mind, Mood, & Memory may be a reliable brain improvement product.