Exir Saffron is a dietary supplement offered marketed to help achieve and maintain optimal physical and emotional balance.The formula is created by Epicure Garden, a company specialized in manufacturing and commercializing saffron based products. The company was established in 2005 in Glendale, California, United States. The company’s entire product line is based on a single herb, the saffron. The company claims the culinary plant has multiple health benefits as well. Exir Saffron is designed with treating specific ailments, particularly in the treatment of anxiety disorders (such as stress or tension), improve memory, help in the premenstrual syndrome treatment and enhance mood and energy levels. The manufacturer also mentions potential benefits for circulatory conditions, such as vascular and cardiovascular disorders and in cellular regeneration processes, due to its antioxidant properties.

1) What Are Exir Saffron Ingredients?

2) What Does Exir Saffron Do?

Exir Saffron is a dietary supplement based on Saffron, like all the other products manufactured by Epicure Garden. Saffron is a herbal nutritional supplement, which includes vitamins like Vitamin A, Folic Acid, Niacin, and Vitamin C, along with minerals and carotenoids, as well as being a good source of Magnesium, Calcium, Selenium, Phosphorus, and Zinc. Saffron is known as the most expensive spice in the world, with an important role in medicine for thousands of years. The ingredient is extracted from a flower named Crocus sativus, also known as Saffron crocus, native to Greece or Southern Asia. Modern research has discovered a possible link between the plant and a decreased risk of cancer and anti-mutagenic properties. Also, it may be helpful in depression, immuno-modulation, and detoxification. Other studies have revealed multiple other health benefits.

Saffron includes three natural chemicals, which are individually recognized as important in health problems: Crocin, Picrocrocin, and Safranal. Crocin has antioxidant and anti-inflammatory properties and may improve the memory, this being the reason why Saffron is believed to be helpful in treating Alzheimer’s disease. Moreover, this element may also play a role in dealing with social anxiety and panic attacks. Last but not least, Saffron is considered a great help in dealing with weight loss.

There are no known side effects of the formula itself, but Saffron could generate some minor headache, dizziness, and anxiety. According to its makers, Exir Saffron has to be taken as one tablet, 2-3 times a day.

4) What You Need to Know Before Taking Exir Saffron

There are no shipping charges for this product when ordering directly from the manufacturer, and shipping usually takes two or three days. Also, the bottle consists of 180 tablets, meaning that just one bottle may be enough for two months. Although there are no free trial offers, the product may be affordable at some level. Comparable with other dietary supplements, the price may be reasonable. There is no money-back guarantee available, but purchasing online seems to be secure. The product received diverse reviews from consumers, which reveal not only good aspects of the product but also drawbacks.

Exir Saffron is an herbal nutritional supplement which features Saffron as core ingredient. The formula is claimed to contain premium quality organic saffron, rich in essential vitamins such as Vitamin A, Riboflavin, Folic acid, Niacin and Vitamin C, as well as minerals and carotenoids.Saffron is generally recognized and used as a spice. It is actually one of the most expensive spices in the world, but has also been used as a medicine for thousands of years. Modern research has been able to show Saffron possess antioxidant, antispasmodic and apoptotic properties. Scientists have revealed that it consists of three natural chemicals: Crocin with antioxidant and anti-inflammatory properties (giving the color), Pricrocrocin (giving the flavor) and Safranal (giving the aroma). Crocin is believed to promote a healthy memory by improving learning capacity, recall and retention. This is one of the reasons why saffron is considered beneficial in reducing memory loss symptoms. Clinical trials have shown the health benefits of saffron on preventing Alzheimer’s symptoms. One study, showed Saffron to have comparable results as Donepezil, a drug commonly used to treat Alzheimer’s and dementia, with fewer side effects (vomiting).Saffron is considered to have anxiolytic properties and apparently works to stimulate Serotonin and Dopamine production. These two neurotransmitters help balance mood and shape behavior. Saffron is tested for benefits against social anxiety and panic attacks. Also, considerable research is focusing on Saffron’s anti-cancer properties. It appears that it may help fight cancer in a process called apoptosis. Basically, Saffron’s active substances enter cancer cells and send them signals to commit suicide, hence destroying them. Saffron is considered generally safe if used up to 6 weeks in the recommended doses. Some mild side effects have been reported such as dizziness, anxiety, nausea or headache. The suggested use for Exir Saffron is of 1 tablet 2-3 times a day. No side effects are mentioned for the formula being reviewed here.

Exir Saffron is offered as a multiple benefit formula designed for people who want to improve or maintain a good health with specific benefits on physical and emotional balance. It is advertised as a product based on a single active ingredient of the highest quality, specifically Exim saffron (claimed to exceed the highest rank available for quality standards). Reducing memory loss symptoms or preventing age related cognitive impairment are also among the advertised benefits. The product has received mixed results, but most consumer reviews on generic Saffron claim the ingredients works wonders against anxiety and mood disorders. However, this is not a clinically researched product and has not been approved by the FDA. For complete and accurate information on the product, we recommended you seek a healthcare professional’s advice. 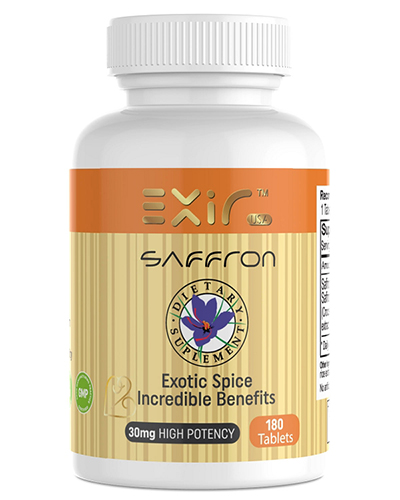 clear
Q:
What are the core ingredients in Exir Saffron?
A:

Q:
What is Exir Saffron?
A:

Exir Saffron is presented as a dietary supplement that was designed as to maintain an optimal physical and emotional balance. The manufacturing company is called Epicur Garden and was established in the year 2005 in Glendale, United States. This product represents a mix of herbs that have a strong antioxidant effect and also provide the body with nutrients that sustain a good health, treating problems like anxiety or panic attacks.

Q:
Does Exir Saffron work?
A:

Exir Saffron is a dietary supplement that is claimed to have numerous benefits, ranging from improving the immune system, energy levels, general mood, and memory to dealing with circulatory disorders and the detoxification process. It may be hard to believe that this vegan, gluten-free, Saffron-based product could have so many health benefits and work at so many levels. Although the key ingredient has been researched and its benefits are well known, the formula has not been clinically reviewed or approved by FDA. However, Saffron has been proven to be a real support for various health problems, and its value is undeniable.

This is one of the most potent Saffron based formula I have ever tried, it gets the job done very nicely.