Calms Forte is advertised as a homeopathic formulation able to relieve stress and relax the body for a healthy normal sleep. The formula is manufactured by Hyland’s, a company which specializes in the production and marketing of homeopathic remedies. The formula enjoys additional benefits, particularly its use is non-habit forming, it is 100% natural and is free of side effects associated to other sedatives (foggy mind, hangover-like feelings, bad mood, etc.).

Hyland’s enjoys an extensive market experience, having been founded in 1903. Initially established as a Los Angeles pharmacy, the company has since extended its product range to include more than 100 homeopathic remedies. Hyland’s is dedicated to delivering readily available safe and formulas for the entire family.

The formula is suited for adults and children older than six. Calms Forte is claimed to have no interactions to other medication.

1) Calms Forte at a Glance

Calms Forte is a homeopathic dietary supplement designed to temporarily relieve nervous tension symptoms and occasional sleeplessness. The formula is a mixture of herbal extracts and minerals.Passiflora (Passion flower) is a plant genus used in a large number of countries all throughout the globe. Its most common uses include anxiety disorders (generalized anxiety disorder, panic disorder, obsessive-compulsive disorder, and social phobia), insomnia, narcotic drugs withdrawal, epilepsy and hysteria. Its medical utility has been scientifically studied to a limited extent. Drowsiness, allergies, vomiting and nausea may appear as side effects.

Another important ingredient of Calms Forte is Chamomile. Its sedative effects It is able to reduce feelings of tension and has been long time known and used as such by traditional medicine practitioners. Chamomile is classified as GRAS (generally recognized as safe) by the FDA and has been used to treat symptoms of ADHD and ADD, stress, insomnia, and panic disorder. The flower is believed to have anti-inflammatory, anti-microbial effects; hence, it is not uncommon for Chamomile to be featured in treatments against wounds, infections or other such conditions. Side effects of Chamomile are rare and include skin redness, mild allergies, and eye irritation.

3) Does Calms Forte Work and it is Safe?

Calms Forte is a homeopathic remedy which features a blend of herbal extracts and minerals. Avena Sativa (oats or groats) has been historically used as a medicine. However, clinical studies and scientific research are limited. The plant is known for its nerve-calming properties. It has been used against anxiety disorders including generalized anxiety disorder, phobias, and social anxiety, insomnia associated with stress and nervous irritation, physical and mental exhaustion and difficulties in concentrating. Because it contains Zinc, Iro, and Manganese, the plant is also prescribed for its nourishing properties for the nervous system. Avena Sativa may also act as a mood enhancer and has been linked to potential benefits against depression symptoms and personality disorders. High doses may cause headaches, restlessness, increased heart rates or allergies.

Kali Phosphoricum is one of the most popular nerve remedies. It is a mineral and helps with some nerve conduit prescribed to those who suffer from mental and physical depression, exhaustion, nerve weakness, stress, mood disorders (depression, phobias, etc.), irritation, extreme fatigue, headache associated to fatigue, and anxiety disorders. For optimum results, the manufacturer recommends that adults take 1-2 tablets three times daily for relaxation or 1-3 tablets before sleep for insomnia. Children aged between 6 and 12 years are recommended to take half the adult recommended dosage.

There are testimonials posted online about Calms Forte. What is being stated includes the following:

6) How Much Does Calms Forte Cost?

The formula can be purchased in containers of 32, 50 and 100 tablets. A 100 tablets bottle sells for roughly $10 and may last as much as 16 days at a maximum dose (for adults, 6 tablets a day). A month’s supply may hence be purchased at approximately $20, no discounts or price promotions applied. The price is similar to other formulas which roughly feature these ingredients. The manufacturer does not sell directly to consumers, however it is available at a large number of online retailers, pharmacies, drug stores, supermarkets, and natural products stores. The official website has a Store Locator section which may help you with identifying local retailers.

Calms Forte is a homeopathic remedy supplied by one of the most reputable manufacturer of such products in the United States, the company called Hyland’s. Homeopathy is one of the oldest alternative medicine branches and enjoys a great success today due to its effectiveness and often lower cost as compared to other types of treatment. There are hundreds of consumer testimonials and reviews available online on Calms Forte. Most of them report the formula delivers great results, and mention the lack of side effects. It is hence very likely that the product will work and accomplish its advertised purpose. 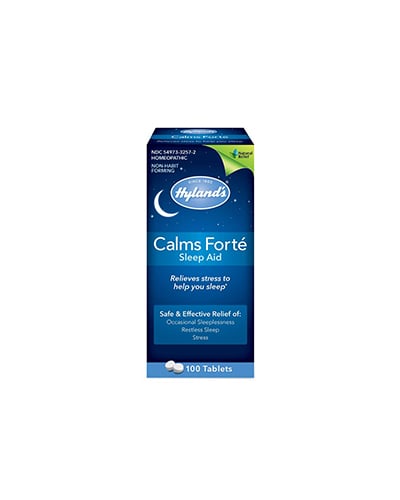 clear
Q:
What does Calms Forte contain?
A:

Q:
Calms Forte is all about what?
A:

Hyland’s Calms Forte is advertised as a homeopathic remedy against occasional sleeplessness (insomnia) caused by stress or nervous tension. The formula manufactured by Hyland's contains a blend of herbs historically used for their medicinal calming and sedative properties. The main ingredients include Passiflora, Chamomile and Avena Sativa. Chamomile has been associated to positive effects against ADD, ADHD, insomnia and anxiety disorders, while Passiflora is known to help with hysteria, generalized anxiety disorder, panic disorder and sleep disorders. Calms Forte can be used by adults and children older than six.

Calms Forte is a natural, side effects free, non-habit forming remedy against occasional insomnia. The large number of consumer reviews confirms its advertised benefits and are a guarantee to the formula's Effectiveness. There are certain side effects associated to some of the main ingredients, while for some, scientific research is limited or inconclusive. The formula is not designed for long term use; caution is advised, especially if initial symptoms tend to persist or worsen longer than 7 days. For precautionary reasons, it is our strong recommendation that you seek the advice of a healthcare professional prior to use.

Calm Forte help me to be calm in the day time. Relax me psychologically. Life problems can be solved with no stress. In the morning I’m in good mood, ready for another day.

Title for your comment
Calm Forte is my friend
Have you tried this product?
Yes
Reply
Iuliana Ionita

I used Calm Forte from long time in different occasions for stress relief. Don’t make habit. You got to find your personal dosage. If you take to mach , can increase your heart beat.

Title for your comment
Thank you CALM FORYE
Have you tried this product?
Yes
Reply
Kyle Mendez

These don’t work on me, perhaps my insomnia is more serious than I think.

I take these occasionally: days when I feel stressed out, exhausted or have trouble falling asleep because my mind won’t stop racing. Haven’t had any problems so far.

It helped me get a better night’s sleep. However, I noticed that every day after I had taken it, I felt body aches and lack of energy all day. This got worse each consecutive day so I quit using it. I am wondering if anyone else experienced this.