Remotiv is advertised as a natural remedy designed to help reduce the common symptoms of nervous tension, mild anxiety, irritability, and stress. The company behind this formula is called Flordis Natural Medicines, and is an Australian manufacturer with an international activity. They state to produce the highest quality products due to their dedication in using the latest technological and medical findings.

Remotiv is advertised to include an extract of St John’s wort that has been most commonly used within scientific research so far. The active substance is a well-known traditional remedy against mood related disorders caused by stress. Its soothing qualities seem to be supported by more recent medical research, but the drug interactions between the plant and other drugs should not be ignored. The formula is offered for adults over 18 years old, excepting those who already take certain medication (including antidepressants, immunosuppressants, anticonvulsants, hormonal medication, Warfarin, or Digoxin).

The scientific studies involving this product include over 2,000 patients. A long-term study (1 year) has also been conducted in order to determine the effects of Remotiv for longer periods of time. This study shows continuous improvements of the symptoms associated with common mood disorders with minimum side effects (gastrointestinal distress mostly).

St. John’s wort is a traditional remedy used to treat mild depression and anxiety symptoms. The herb has been very popular among alternative medicine practitioners, but for a long time, modern medicine completely ignored the plant’s therapeutic effects. In more recent years, scientists and researchers started to show increasingly more interest in natural remedies such as herbal based products.
St John’s wort is one of the most popular and well-researched such remedy believed to owe its effectiveness to a number of chemicals that have the ability to increase the levels of certain neurotransmitters in the brain. The compound found in this plant help in the synthesis of Serotonin, Norepinephrine, and Dopamine, three of the major brain chemicals that influence mood. Although its supervised use as a mild antidepressant (associated with other medication or as a stand-alone treatment) is supported by current medical research, a unanimous opinion regarding its safety has not been issued. The main concern involves the numerous drug interactions of the plant extract which makes it potentially dangerous if used without the consent of a specialized practitioner.

Other uses of product containing this extract include the treatments of various health issues such as: inflammation, muscle pain, burns, bruises, and scrapes, wounds, bug bites, irritable bowel syndrome, chronic fatigue syndrome, hepatitis, etc. Most of these uses have not been validated by scientific evidence.

2) Details on Remotiv Ingredients and Uses

3) Does Remotiv Work and it is Safe?

St. John’s Wort also known as Hypericum perforatum is a very popular alternative medicine used for centuries to treat sleeping disorders and anxiety. More recent studies on this plant have tried to determine the mechanism of action of the plant to prove the claimed benefits. It has been observed that the beneficial properties of St John’s wort are owed to certain constituents called flavonoids (also shown to play important roles in some processes), but also to compounds like proanthocyanidines, phloroglucinols, or xanthones (less researched). These substances are the ones that facilitate the synthesis of certain neurotransmitters responsible for the body’s reaction to stress stimuli. Such neurotransmitters include Serotonin, Dopamine, and Noradrenaline. These natural chemicals have been shown to be crucial for maintaining a balanced mood and normal brain function. But while the conducted studies indicate positive results and the existing empirical data (resulted from patients who have seen improvements in their mood as result of consuming St John’s wort based products), researchers have yet failed to identify the mechanism of action.

St John’s wort supplements are often recommended to the detriment of prescription drugs, particularly if the mood disorder is reduced in severity and caused by a temporary imbalance (unfortunate event, seasonal causes, etc.) in the patient’s life.

According to the manufacturer, a two tablets taken regularly for 2-4 weeks should be enough for the consumer to see the first improvements. However, the minimum recommended time for full effects is 4-6 weeks. The formula is not recommended for adults less than 18 years old, or pregnant and nursing women (due to lack of scientific evidence in these categories of people).

Remotiv reviews are missing at the moment of this review. Its efficacy is however supported by the clinical trials involving the formula. Those who want to find out more information can access the numerous online sources regarding this product.

Remotiv nutritional formula is available in 60 tablets bottles- the equivalent of a month’s supply. The formula is not available for online purchasing on the manufacturer’s web page. The consumer may find a provider for this formula (pharmacist or naturopath) only by introducing a postcode or the name of the suburb in which he lives.

The formula is available online at various other retailers for a moderately high monthly price. Each of them offers specific discounts. The specific terms and conditions may be consulted on each partner’s web page.
The formula does not seem to come with a money-back guarantee or in a free trial sample.

For maximum benefits the suggested dose of Remotiv is 2 tablets per day for a minimum period of 4-6 weeks. The side effects reported include restlessness, irritability, fatigue, dizziness, skin rash, stomach discomfort, and anxiety. Very high doses may cause severe reactions when sun exposure occurs. For complete information about the potential side effects it is best to consult a healthcare practitioner.

Remotiv formula is presented as one of the most potent and safe formula designed as a natural antidepressant. It has the major advantage of being clinically researched and thus scientifically shown to be beneficial in alleviating the symptoms for which it is recommended.

More so, the product is advertised to include a very small percent of Hyperforin- the substance considered responsible for the plant’s numerous drug interactions. However, Remotiv is not recommended in combination with other medication (indicated by the manufacturer).
Although the formula is clinically proven, it does not enjoy the support of consumers. Testimonials about this formula are unavailable at the moment of this review.

In conclusion, this may prove to be one of the safest natural remedy against mild anxiety and nervous tension, but the safety of the formula varies depending on each individual medical history and other medication he might be on. To avoid any unwanted reaction, it is advisable to ask specialized help before taking Remotiv. 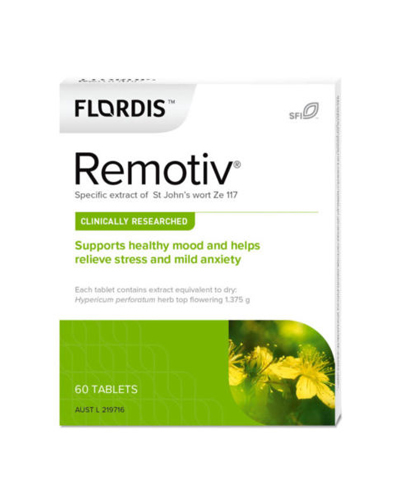 clear
Q:
What are the active ingrediens in Remotiv?
A:

Q:
Remotiv is all about what?
A:

Remotiv is recommended as a natural antidepressant based on the therapeutic properties of St John's wort herbal extract. The formula is promoted as possibly effective in reducing symptoms of nervous tension, irritability, stress and anxiety. The manufacturer is the Australian company called Flordis Natural Medicines. Remotiv is advertised as a clinically proven formula in studies involving more than 2,000 people, including in a long-term study. The beneficial effects in reducing depression and anxiety and the reduced number of side effects reported suggest that this may be one of the most high-quality formulations of its type. The formula is suited for adults with ages over 18 years old who are not currently under medication (specifically antidepressants, immuno-suppressants, Warfarin, or anti-convulsants). The manufacturer recommends a regular use for at least 4-6 weeks for maximum effect.

Remotiv is presented as a clinically proven high quality formula against the common problems caused by leading a stressful life. The main advantage as compared to similar formulations is that is been the subject of clinical studies. Most of these over the counter products are unapproved and may include ingredients of poor quality. But unlike these formulations, Remotiv seems to be one of the top quality supplements.

Another reason for believing in the quality of this formula is the fact that the manufacturer recommends using this formula only under the supervision of a specialized healthcare practitioner. He even encourages this practice by allowing the user to find the closest pharmacist/ naturopath for complete information about the formula and a safe usage. The official site offers complete information about the dosage, ingredients, warnings and potentially harmful drug interactions.

I like this formula because it works rapidly and did not cause any side effect. I have been taking it for 2 months now and decided I will continue the treatment after I finish my second bottle. I definitely feel better than ever, I am more relaxed and happier and at the same time I am able to perform all my daily tasks without stressing about each little thing that does not go as I initially planned. And it turns out I can manage all the daily problems! Great product .

I simply love this formula! It has helped me get rid of my anxiety issues and the uncontrollable panic episodes I was feeling after my car accident last year. I take one tablet in the morning and one in the afternoon and I feel wonderful all day long. This supplement is definitely worth the money.

Have been taking two tablets a day for less than a week. I am experiencing irritability, sleep disturbances and itchiness. Going to discontinue use and dispose of the remaining tablets. Will improve my diet and exercise regime instead. A waste of resources and money!

There is inscription on the box that says every tablet also contains 50% ethanol. Why is this necessary?
Does the capsules contains also ethanol (I mean other vendors like Now Foods, Solgar, Nature’s Way etc)?

Definitely made a big difference! Didn’t realise how much until I thought I didn’t ‘need’ it anymore and slowly weaned off it….and it just as slowly dawned on me my old symptoms were reappearing. So I am about to commence taking it again. I do hope in the bearish future I really won’t need it though…..