Graviola is a dietary supplement advertised as an aid in supporting healthy cell growth and functioning. Its core ingredient is the extract of Graviola (leaf), a tree which grows in the Amazon jungle and in some parts of the Caribbean islands.

According to the manufacturer, Graviola promotes a calming general state and helps maintain a positive mood, although it does not cite any research or clinical trials to support these claims.

The supplement is manufactured and marketed by New Foods, an American company with an experience of over 40 years in the health foods and nutritional supplements business sector. The company claims it is one of the best-selling brands in the health food sector and is leader in its field.

Graviola tree’s different parts (bark, leaves, root, seeds and fruits) have been traditionally used in the natural medicine of the tropic regions. Although insufficient evidence of its effectiveness exists, Graviola is currently used in the treatment of indigestion, coughs, relaxation, bacterial and parasitic infections and even certain types of cancer.

It is very important to understand at this point that systematic research in humans is in its incipient stages even though results look promising. Studies made suggest that the bark and leaves of the Graviola tree contain a colorless substance called Hydrocyanic acid considered poisonous. Some studies revealed that the Annonacin contained by Graviola may have a connection in the development of atypical Parkinson’s disease or might make the condition worse. The plant is therefore considered unsafe.

Now Foods is not the only companies that offer a Graviola natural extract formula. In fact, this formulation is quite similar to other Graviola-based products.

A recent clinical research showed that the extract from the leaves of this plant is an effective treatment for malaria. Furthermore, research conducted at Purdue University revealed that Graviola extract might be effective in slowing down the development of cancer cells. It was proven that this plant is up to 10.000 stronger than traditional cancer treatment drugs like Adriamycin.

Graviola is considered safe with side effects rarely occurring. However, women who are pregnant or nursing and children under 18 should not use this product. Persons with a known medical condition including any cardiovascular disorder and hypotension (low blood pressure) should also avoid the use of Graviola.

There are testimonials about Graviola posted online. What is being reported includes the following:

Each bottle of Graviola contains 100 capsules, which should be enough for up to 20 days of treatment for the average consumer. The average price per capsule is what recommends Graviola as a very good purchase.

The product is sold via numerous online and offline retailers. However, it does not appear to be accompanied by a free trial offer or money back guarantee policy. Some retailers may offer such features, but you should contact them directly and ask for this information.

The recommended dose of Graviola is two capsules taken 3 to 4 times daily as needed. The supplement is not recommended to patients suffering from neurodegenerative disorders or Parkinson’s disease, taking hypertensive or MAO inhibitor medications.

Graviola is a dietary supplement marketed as an efficient way to keep a positive balanced mood, improve overall health and induce a calming effect.

Graviola by Now Foods is not clinically researched nor is it approved by the FDA. Its main ingredient is also insufficiently researched, although there have been some laboratory studies regarding its anti-cancer properties, with proved its efficiency in several types of breast and liver cancer. No study has yet been developed in humans on a large scale.

Graviola has it’s restrictions in use and is not recommended for pregnant or breastfeeding women, people suffering from neurodegenerative or Parkinson’s diseases. It is our strong advice to consult a healthcare professional before using Graviola or any dietary supplement. 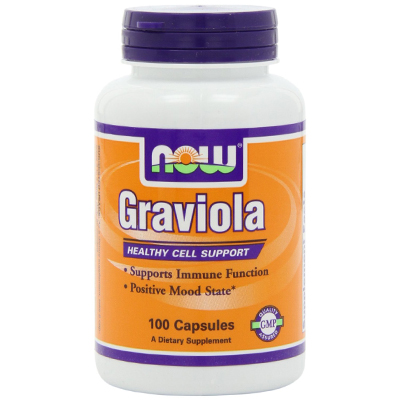 Customers Questions and Answers with Graviola

Q:
What is Graviola supplement?
A:

Q:
Does Graviola work?
A:

There is no question that Graviola is a plant with powerful medical properties. In fact, the ingredient has been used for centuries by the local population in the treatment of malaria and other health concerns.

Many manufacturers are using Graviola as the main ingredient in their herbal supplements. While many of these formulas are quite similar, we advise our readers to research further into each supplement before a final decision is made. We encourage them to take into consideration the reputation of the manufacturer, the quality of the ingredients and the amount of provided information.

Now Foods is a company that enjoys a excellent reputation among its customers. Graviola has received numerous positive reviews and testimonials, and according to the enterprise, this formula contains no dangerous additive and chemicals. If you are looking for a Graviola-based supplement, this one may be a viable option.

I tried these capsules on 2 separate occasions and both times I got nauseous. Will try one more time and if it happens again, I will be returning them.

Great stuff. Gets the sludge out of your system. Anything that seems to be bad for you, is exited from your body. Not in a bad explosive way. You do have more energy, naturally, not jittery. Sleep came easier. And after a 6months of taking them, I definitely feel much better. You do need to go off the dose for at least 1 week a month. And no coenzyme 10 while taking these. I am taking these due to having been diagnosed with cancer, and I have read that it helps with prevention or decreasing of abnormal cells. My last test showed, that was the case. Better to take this then deal with the side effects of other organ damage from Chemo/radi. But to each his own on that matter.