Orchex Review – 8 Things You Should Know Before You Buy

Orchex is advertised as a dietary supplement which was introduced on the nutritional field in 1956 by Standard Process. It should offer calming effect mostly for people people with emotional imbalances. Moreover, it is viewed as a reliable support for testicular health as well as functions linked to the central nervous system.

The company that has designed and is presently selling this remedy is called Standard Process and has more than eighty years of experience on the supplementation field. Its creator is called Dr. Royal Lee and affirmed that his supplements differentiate from others due to the selection of the component’s source which is carefully chosen. He thinks that the source of an ingredient is more important than the amount used in any type of supplement.

A particular aspect of the Standard Process supplements is the fact that during creation processes, their ingredients weren’t disassociated into isolated compounds, thus they have been processed to remain complete and intact so they can provide the needed nutritional support. Moreovre, the manufacturer claims that their microbiologists and chemists work in laboratories where they conduct bacterial and analytical tests on the supplements from the raw material to the finished product so quality and safety can ensured for the customers. On the other hand, this claim wasn’t evaluated by the FDA.

Orchex is the nutritional representation of Dr. Royal Lee’s philosophy related to the effectiveness of glandular therapy. To be price, the bovine orchic Cytosol found in this supplement contains a wide array of materials which are produced in the gland, such as acids, hormone precursors and enzymes which are carefully preserved so they can offer innate beneficial effects to the corresponding cells of the organism. On the same note, but on a different cellular level, the stomach, spleen, liver, and brain ingredients offer their substances to help renew some of the bodily cells.

Another important ingredient of Orchex is the soybean component which is obtained from a source of lecithin found naturally and which offers nourishment to the brain. Hence, people suffering from conditions or disorders of the central nervous system such as Alzheimer’s disease, short-term memory loss, dementia or mild-cognitive impairment, may benefit from symptom relief or even improvement of the brain.

We should keep in mind that the nervous system is an complex and intricate network of structures that coordinate, active and control all the bodily functions. Due to this, it needs a series of multiple nutrients so that optimal functions are supported. The active components associated with nutritional factors and adaptogenic effects of the glandulars help the nervous processes by nourishing the brain. There were no reported side-effects of this remedy until now.

3) Is Orchex Right for You?

Orchex embodies the philosophy of Dr. Royal Lee when it comes to the Effectiveness of glandular therapy. The bovine orchic Cytosol found in this remedy features a wide variety of materials that are produced in the gland like acids, enzymes and hormone precursors that are supposedly captured and preserved to offer innate benefits to the corresponding tissues of the organism. On a similar not, but different cellular level, the liver, spleen, stomach, and brain ingredients provide their substances to help rebuild some of the bodily organs.

Another reliable ingredient of this remedy is the soybean component that is obtained from a natural source of lecithin which offers nourishment to the brain. Therefore, people suffering from central nervous system conditions or disorders like Alzheimer’s disease, mild cognitive impairment, short-term memory loss or dementia might benefit from symptom relief or even enhancement of the brain.

It is important to keep in mind that the nervous system represents an intricate and complex network of structures which coordinate, active and manage to control all the bodily functions. Because of this, it requires a series of multiple nutrients for its optimal functions to be supported. The active components directly associated with nutritional factors as well as adaptogenic effects of the glandular materials target the nervous functions by nourishing the brain. There were no reported side effects of this dietary supplement until now.

There are online customer testimonials about Standard Process Gastro-Fiber. What is being reported includes the following:

Orchex represents a reasonable price product, especially when compared with similar supplements. People may buy it either from the manufacturer web page, online from some providers or local retailers. It is distributed by bottles that contain either 40 or 150 capsules. Because the daily recommended dosage is of one capsule per meal, a bottle can be enough for either one or five months of treatment if this daily suggested dosage is respected. However, the manufacturer doesn’t offer a free sample or money-back guarantee, so before purchasing this product, people have to be pretty sure that they want to take it.

The daily recommended intake of Orchex is one capsule per day or as directed by the personal physician.

Overall, Orchex is a dietary supplement that helps with support and maintenance of the nervous system’s balance and health as well as tranquility. In addition, it may deal with bodily conditions that are linked to emotional imbalances which are usually determined by nourishment gaps in the human body. It enhances the functions of the brain by improving the quality of the memory in people suffering from mild cognitive impairment, Alzheimer’s disease, or shot-term memory loss. It is however a good product found for purchase at affordable prices whose consumers have been generally satisfied. Unfortunately it can’t be taken by vegans or vegetarians. 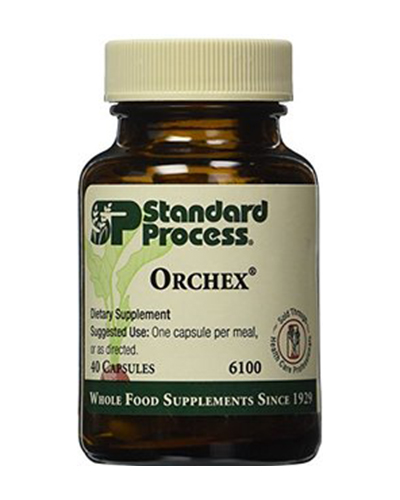 clear
Q:
What are the active ingrediens in Orchex?
A:

Q:
Orchex is all about what?
A:

Formulated as a remedy which enhances the memory while also offering comfort for people suffering from emotional imbalances, Orchex was introduced on the market in 1958. Since then, it helped people suffering from conditions or disorders of the central nervous system such as Alzheimer's disease, mild-cognitive impairment, or long-term memory loss. It provides beneficial effects because of its contained ingredients which represent a combination between niacin, Vitamin B6, and a proprietary blend.

All in all, Orchex represents a dietary supplement which supports and maintains the balance and health of the nervous system as well as tranquility. Additionally, it may deal with physical issues which are directly linked to emotional imbalances created by nourishment gaps in the organism. It should enhance the functions of the brain and enhance the quality of the memory in people who have Alzheimer's disease, mild cognitive impairment or short-term memory loss. It represents a good product found at affordable prices whose feedback is positive. However, it is not a good supplement for vegetarians or vegans since it contains animal traces.

I started my husband on this a month ago. He has high-stress levels and anxiety because he’s a workaholic. He is SO CALM now. So much more in control of his emotions. I wish I had this 50 years ago! Yes, he’s been a stressful person that long. I’d give this a 10 star!!

Title for your comment
A life saver!
Have you tried this product?
Yes
Reply
Evelyn S. Edwards

I began taking this to help with my anxiety. I am a middle school teacher, so keeping calm is a must. Since I started taking it I have felt more calm, less anxious, and able to deal with daily life without getting frustrated

My anxiety has been bad so I asked my chiropractor if any of the standard process would help, I already take for my thyroid, adrenal and liver support. I have Fibromyalgia and emotional stress is a bad trigger. Today I could not stop shaking again, whole body stressed and felt like could not hold back tears or stop the shaking. I took two and within 20 minutes was not shaking, not crying and calm.

Standard process Orchex works wonderful for me and calms my anxiety!!!! Also I am very happy with its more natural ingredients than these other so called good for you pills