Serenity is a supplement aimed for individuals who suffer from unstable emotions, mood swings, excessive sleeping, migraines, a bad temper, stress, insomnia, anxiety, PMS, menopause and uncontrollable crying. Serenity was initially developed by Dr. Hans Nieper and it is manufactured by Extend-Life. Dr. Hans Nieper’s formula was patented in Germany and Urban Nutrition has been produced this supplement for more than 10 years now.

According to several recent studies (AARP Bulletin, October 2008 issue), anxiety, depression and insomnia top the list of conditions for which herbal remedies are dispensed. Many of these natural alternatives also strive to avoid the common side effects associated with prescription medications that are used for the exact same purpose.

The product’s website states that there is a 100% money back guarantee if the consumer is not completely satisfied with Serenity, but the terms of this agreement are not specified. However, the customer can request a free 30 day trial sample through the customer service team to try the product before making a purchase.

1) Serenity at a Glance

The producing company advertises Serenity as an all-natural product and its formula is recommended by Michael Murray, a well-known naturopathic physician. According to the company, this herbal supplement promotes emotional well-being.

Serenity incorporates several natural ingredients. First, and the most important one, is Ashwagandha extract (also known as Sensoril), which has a long history in traditional Indian medicine. The plant was commonly used to support mental health. More recent scientific studies indicate that Sensoril may be a useful tool in the management of anxiety, depression, cognitive decline, drug addiction and various neurological conditions.

Rhodiola and Eleuthero are usually classified adaptogens. Adaptogens are substances that help the body to safely adapt to physical and psychological stress factors.

3) What Does Serenity Do?

A report of the Centers for Disease Control and Prevention claims anti-depressants are the most commonly prescribed drugs in the United States. Alternative medicinal solutions are known to cause fewer side effects than prescription medications, especially since the long-term use of antidepressants has not been systematically studied. According to a recent study (AARP Bulletin, October 2008 issue), anxiety, depression, and insomnia top the list of conditions for which herbal remedies are dispensed.

Today, scientists believe that two of the causes of anxiety disorders are the nutritional deficiency and inefficient methylation of brain chemicals. Methylation is a biochemical process in which a methyl group is placed on homocysteine, where homocysteine is known as a harmful amino acid that may be the underlying cause of cardiovascular diseases and many neurological conditions such as Alzheimer’s disease. Also, there is evidence which shows that high homocysteine levels resulted from slow methylation may lead to imbalances of Serotonin, a key brain neurotransmitter which regulates mood. Insufficient Serotonin is believed to lead to depression.

SAMe (S-Adenosyl Methionine), a core ingredient in Neuro-Natural Serenity is a compound naturally produced by the body (particularly in the liver) and classified as one of the most current methyl donors. Extensive research conducted on SAMe over the past years supports the undeniable benefits of the immune system and liver functions, as well as for maintaining healthy cell membranes.

It seems that SAMe participates in the biosynthesis of essential brain chemicals, specifically Serotonin, Dopamine, and Melatonin. Hence, it may potentially be effective in addressing conditions caused by imbalances in these neurotransmitters. SAMe is currently investigated as a treatment for major depression and anxiety disorders such as obsessive-compulsive disorder or panic disorder believed to be closely related to deficiencies in the levels of Serotonin. The chemical is also found to have a positive outcome when used to improve memory, learning capacity, mood, motivation, and sleep, fight against the common effects of aging, reduce aggression, as well as for the treatment and management of Alzheimer’s disease.

Long term side effects of SAMe are currently unknown; however, high doses may lead to anxiety, restlessness, and even insomnia.

6) How Much Does Serenity Cost?

Neuro-Natural Serenity can be considered an expensive brain supplement. A bottle of Neuro-Natural Serenity contains 90 capsules, which should be enough for 15 days of treatment at a recommended daily dosage of 6 capsules. A month’s supply may hence cost as much as $90 (if no discounts or other promotions are offered). This supplement is available for purchase directly from the manufacturer’s website as well as from various other online retailers. Some retailers may offer discounts, free shipping and even free bottles for larger orders.

7) How to Take Serenity

The recommended dose forSerenity is three capsules at night before sleep and another capsule in the morning. This product is not recommended for pregnant and nursing women, as well as children and babies. It is advised you consult your doctor before you take this supplement.

Serenity appears to be well received by most of the individuals who’ve actually tested it. Maybe one of the best aspects of herbal supplements is that they usually provide side benefits instead of side effects.

This herbal remedy is a mixture of Ashwagandha (which can improve fertility and immune function during stressful times) and Eleuthero and Rhodiola.

While we were unable to find any concrete study that supports the company claims, this product is recommended by Michael Murray, a well known naturopathic physician. Along with the free trial sample and many positive testimonials, this herbal remedy may be a good alternative for those who suffer from unstable emotions, mood swings, excessive sleeping, migraines, a bad temper, stress, insomnia, anxiety, PMS, menopause and uncontrollable crying. 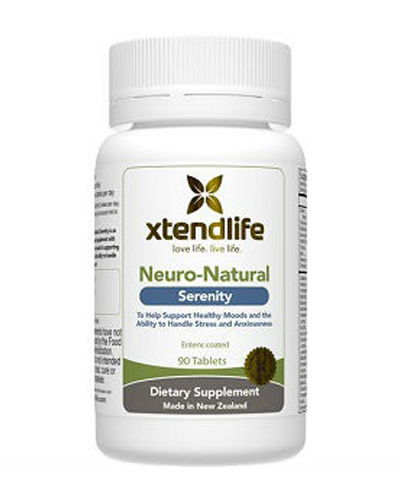 clear
Q:
What are the active ingrediens in Serenity?
A:

Neuro-Natural Serenity has received some positive reviews and testimonials as many consumers have reported positive results after using it. Consumers mention the product as being effective in alleviating symptoms of depression and anxiety, lifting mood, and improving the quality of sleep.

The formula contains a large number of ingredients, some of which have been linked to various side effects, even if not scientifically proven yet. More so, some may potentially interact with other drugs, making a health care provider's opinion necessary.

I ordered this for my son who is bio-polar and has hyperthyroidism. He says he doesn’t feel different, but I notice and so do his friends. It seems to take the edge off his irritability and frustrations. I used it twice when I felt anxious myself and it totally calmed me down. I say it works!

I was diagnosed with BiPolar II about ten years ago and medications left me emotionally “flat.” I discovered Urban Nutrition’s Serenity and it has been a life saver–just ask my husband and friends! I know for sure it works because if I run out and wait too long to order more or if I try stopping it for a while, I definitely notice a difference, as do my friends and family. If it didn’t help you, that doesn’t mean it can’t help others. I am no longer “flat” and have “normal” highs and lows. I would recommend that anyone in my situation at least try it!