By the law of nature, with age comes an increased risk of developing a chronic disease. As time passes we should take very good care of our health and wellbeing. One of the ways of doing so is taking supplements that could help our body against chronic illnesses. Having this in mind, a vitamin-like substance Coenzyme Q10 (CoQ10) has received increased attention from scientists all around the world. Due to its anti-oxidant properties, it showed a potentially positive impact on various illnesses such as cardiovascular diseases and cancer.

Swanson Ubiquinol is a supplement based on CoQ10. The supplement is particularly designed for individuals over 50 years of age and generally for anybody who has substantially lower CoQ10 levels. According to the manufacturer, Swanson Ubiquinol is produced from 100% natural CoQ10 through a biological fermentation process, thus it allows higher elevations of circulating CoQ10 in the bloodstream.

The manufacturer is the American company Swanson, founded in 1969. The company markets a variety of vitamins, dietary supplements, and herbal products. All company products are subject to a 100% money-back guarantee. Plus, Swanson claims to have voluntarily participated in independent third-party Good Manufacturing Practices (GMP) audits since 2001.

1) Ubiquinol at a Glance

Swanson Ubiquinol is a dietary supplement based on the Coenzyme Q10, a substance first discovered in the 1950s. Particularly, it is based on the Ubiquinol – a form of CoQ10 developed by Kaneka, a leading manufacturer of CoQ10 supplements.

Later research has shown that CoQ10 plays an essential role in the electron transport chain throughout the body, a role that no other molecule is able to perform. CoQ10, therefore, contributes to energy production, from which its anti-oxidation properties derive. Although your body produces CoQ10, it can be depleted by a variety of circumstances. For example, the rate at which it is produced decreases with age, which is linked to the start of age-related diseases like heart disease, cancer, and cognitive decline.

The recommended daily dose of Swanson Ubiquinol is one soft gel (90-200mg of CoQ10) taken with food and water. Although the dosage needs can vary based on the individual’s condition being treated. The manufacturer mentions no side effects to the formula, as even at extremely high dosages, CoQ10 is typically well-tolerated (1). Some people who are sensitive to the substance, however, may develop adverse effects such as diarrhea, headaches, nausea, and skin rashes. CoQ10 has also shown a tendency to interact with some medications, like antidepressants, chemotherapy drugs, and blood thinners. It’s always a good idea to consult with your doctor before taking a supplement.

2) Details on Ubiquinol Ingredients and Uses

As reported on the manufacturer’s website, Swanson Ubiquinol includes the following ingredients:

Created as a dietary supplement, Swanson Ubiquinol is used to maintain adequate CoQ10 levels in the body. It is composed mainly of Ubiquinol, an active form of CoQ10. As an antioxidant, it provides a defense against oxidative damage to the cells including lipids, proteins, and DNA. Also, it contributes to energy production in the body.

There is an adequate amount of academic literature reporting the potential health benefits CoQ10 can have on our bodies. The evidence showed that CoQ10 may prevent heart disease by lowering the level of “bad” cholesterol (LDL) in the blood (2). It also demonstrated improving migraine symptoms and frequency of episodes. A possible mechanism of pain decrease is CoQ10’s trait to reduce free radicals and oxidative stress (3). As reported in the literature, taking CoQ10 supplementation could improve exercise performance in athletes via increasing energy production in the muscle cells (4).

Other health benefits associated with CoQ10 intake are increased fertility and improved levels of blood sugar among people with diabetes (5,6). Oxidative stress has been linked to the onset and progression of Diabetes, as well as a negative impact on the quality of eggs and sperm. By decreasing oxidative stress in the body, CoQ10 could eliminate all the issues above.

Besides academic evidence, there are some online testimonials from users of this product. What is being stated includes:

Some of the health benefits associated with CoQ10 supplementation are:

5) Precautions of Ubiquinol Use

There are no Swanson Ubiquinol side effects mentioned by the manufacturer, although the CoQ10 has been associated with side effects such as diarrhea, headache, nausea, and skin rashes.

Taking the supplement close to bedtime can also cause insomnia for some people.

CoQ10 can interact with some medications while taken together. Consulting with your doctor or healthcare provider is always suggested.

For the best effect, it is recommended to take CoQ10 with food that contains fat, as it is a fat-soluble element.

Swanson’s Ultra Ubiquinol is sold in bottles containing 60 soft gels at 100 mg. It is considered to be an affordably priced remedy, especially in relation to its promised effects. The product is found for purchase either on the manufacturer’s website or some other online retailers. As marketed on the official website, all company products are subject to a 100% money-back guarantee.

Swanson Ubiquinol is intended for individuals with lower CoQ10 levels. Such are people over 50, those who take medications that deplete CoQ10 in the body or interfere with its production. It is always suggested to consult with a doctor before starting taking a supplement.

There is a valid amount of scientific evidence that shows the effectiveness of CoQ10 in multiple cases. It is as always our strong recommendation that you seek the advice of a healthcare provider prior to starting treatment with any kind of dietary supplement. 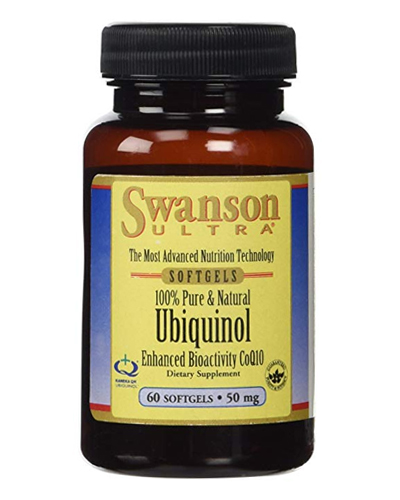 clear
Q:
What are the Ubiquinol ingredients?
A:

Q:
What is Ubiquinol supplement?
A:

Ubiquinol 100% Pure & Natural is advertised to be a supplement that aims to a healthy elevation of CoQ10 in the bloodstream. The company that produces this formula is called Swanson Health Products, located in North Dakota. This supplement is based around the ubiquinol molecule that is obtained by a biological fermentation process and has the effect of obtaining a higher elevation of CoQ10 found in the blood stream. This can be useful for people that suffer from a CoQ10 deficiency.

Q:
Does Ubiquinol work?
A:

Swanson's Ultra Ubiquinol is promoted as a product that improves the CoQ10 in the body. Thus, it should provide a defense against oxidative damage to the body. This product is especially recommended for people over 50 as well as those who have low CoQ10 levels. Taking CoQ19 has shown a positive association with diabetes symptoms, heart disease, migraine, infertility level, and physical performance.

I have a friend that used this formula and was pleased.