The product has been developed by a reputable American company called Nature’s Way. The company has been manufacturing and selling natural remedies since the late 1966’s and is currently globally present. The company was founded by Tom Murdock, a pioneer of the natural and holistic movement in America. Tom Murdock had a significant influence on the rebirth of botanical medicines that took place in the 1970’s.

Beta Carotene contains 25,000 IU of Beta Carotene which is a very powerful antioxidant. It is extracted from salt-water micro-algae called D salina which is believed to be one of the most important sources of non-synthetic beta-carotene. It is stated that beta-carotene constitutes more than 90% of these algae, more than the content of beta-carotene found in any other fruit or vegetable.

Beta Carotene is addressed to people who want to maintain or achieve an overall good health and to people who wish to prevent premature aging by reducing the negative effects of free radicals.

1) Beta Carotene at a Glance

Beta Carotene is a vitamin based supplement. The formula contains one of the most powerful natural antioxidant which is beta-carotene, the precursor of vitamin A.
Beta-carotene is part of the carotenoids group, which is a group of red, orange, and yellow pigments. Beta-carotene can be found in vegetables, fruits, and whole grains, but it can also be synthesized in a laboratory.

The Beta Carotene used in this formula, however, is not the synthetic form as it is extracted from a natural source which is the D salina algae.

Beta-Carotene supplementation may interact with drugs prescribed to lower cholesterol (Niacin, Pravachol, Lescol, or Mevacor). It is, however, considered generally safe and does not cause hypervitaminosis due to the ability of human body to stop synthesizing this substance when enough vitamin A is provided.

3) What Does Beta Carotene Do?

Beta Carotene is a vitamin-based supplement.

The main ingredient is a red colored pigment which can be found in fruits and plants. It is the precursor of Vitamin A. The one used to create the formula from Nature’s Way is extracted from the unicellular alga Dunaliella salina.

Beta Carotene is researched for its believed qualities in reducing the risk of different forms of cancer, preventing age-related macular degeneration and slowing down cognitive decline learning, thinking and memory skills in particular and thus reducing the risk of Alzheimer’s disease. It is also used to treat and reduce the symptoms of depression.
However, it has been stated that chronic high doses of beta-carotene supplementation taken by smokers increase the risk of developing lung cancer. This affirmation has been put into question as there is no valid evidence to prove it.

Beta Carotene is considered a very safe source of vitamin A. The substance may however interact with several drugs such as those prescribed to lower cholesterol, but is considered a moderate interaction.

Nature’s Way formula is advertised to be free of artificial ingredients and preservatives, sugar, corn or any allergenic compounds such as corn, wheat or yeast.
There are many companies who offer beta-carotene based products on the nutritional supplements market who claim it is effective for a large variety of disorders and conditions. However, for many of the ailment claims the evidence is insufficient or lacking due to limited scientific research.

Consumers have confirmed the high quality and Effectiveness of this product for eyes problems and for the skin.

There are testimonials posted online about Beta Carotene. What is being stated includes: No stomach reactions and easy to swallow/ One of the best D. salina-derived Beta-Carotene products/ Good quality and happy with product

5) Precautions of Beta Carotene Use

Beta Carotene is offered in bottles of 60 or 100 soft-gels. The price for a 1-month supply starts at $3.50 and may increase to roughly $10 for a bottle of 100 pills. The manufacturer makes no mention of a free trial period, but it claims to offer free samples and coupons if you subscribe to their community. More details can be obtained by accessing the manufacturer’s website, as this may be a limited offer. On the other hand retailers may also offer some benefits for online purchasing online (free shipping for orders exceeding a specified value).
The manufacturer provides list of retailers on the official website.

The suggested dose for Beta Carotene is of 2 soft-gels daily preferably with a meal.

Beta Carotene is a nutritional supplement offered as a support to combat the effects of free radicals on our body.

The formula is based on a natural active ingredient, the inactive form of vitamin A called beta-carotene. This is a widely researched substance proven effective in the treatment of conditions such as erythropoietic protoporphyria, brest cancer, asthma attacks or sunburn. There is still insufficient evidence for the use of Beta Carotene in preventing conditions like Alzheimer’s disease, diabetes, heart disease, lung cancer in smokers, or prostate cancer. The manufacturer claims to produce and pack their formulas only in pharmaceutically licensed and manufacturing facilities which follow GMP guidelines.

Beta Carotene is not an FDA approved formula. It is recommended to always consult a healthcare professional before starting to take any kind of dietary supplements. 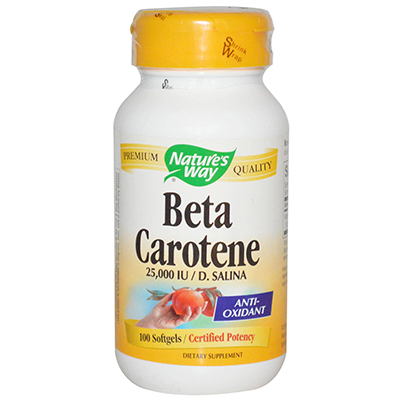 Q:
What is Beta Carotene?
A:

Beta Carotene formula is a nutritional supplement created to combat the negative effects of free radicals and oxidants, molecules which affect negatively human cells and DNA. The formulation manufactured by Pharmavite contains 25,000 IU of beta carotene extracted from the salt-watered micro-algae D salina. The supplement addresses the needs of people who are interested in maintaining an overall state of health and those who want to prevent cellular aging and the negative effects associated with it. Beta-carotene supplements are considered generally safe. Some interactions with cholesterol lowering medication have been reported.

Q:
Are Beta Carotene benefits actually a reality?
A:

Beta Carotene is marketed as a natural formula designed to prevent and fight the negative effects of oxidative stress. The formula is based on a single active ingredient which is a non-synthetic form of Beta Carotene extract from D. salina algae. This is considered a much more abundant source of natural beta-carotene than any other fruit or vegetable sources. The supplement is based supplements are currently used for a large variety of conditions, but many of them are not supported by scientific evidence. Also, the whole formula has not been involved in clinical trials so but the reviews from consumes have been generally positive. We recommend caution, as always.

I bought this after reading how free radicals affect us and how important antioxidants are to keeping the negative effects they have on our body under control. I started taking them one week ago and I haven’t experienced any side effect so far.

This formula contains beta-carotene from a natural source and is manufactured by a respected company. I trust it 100% with my health.