Ginkovital Review – 8 Things You Should Consider

Ginkovital is a dietary supplement marketed as a formula designed to maintain the health of the heart and blood circulation to the brain and body extremities, such as the hands and feet. Ginkovital is specially formulated using standardized Ginkgo Biloba extract concentrate.

According to the manufacturer, the formula contains high levels of Ginkgo flavonoids and terpenoids, the primary active components that research showed to help with blood circulation.

The formula is manufactured by HealthAid, a company founded in 1982 and one of England’s first manufacturers of nutritional supplements. The company sells online. Additionally to Ginkovital, they also offer a variety of beauty products, mineral and vitamin supplements and herbal remedies for a wide spectrum of health benefits.

The manufacturer mentions no associated side effects, nor does it mention any drug interactions, however mild side effects associated to Ginkgo Biloba have been reported.

Ginkovital is based on the active ingredient Ginkgo Biloba, a highly popular ingredient commonly used by natural remedies available today.

The herbal extract from Ginkgo Biloba has proven neuro-protective and antioxidant properties. One of its most important beneficial effects is on the circulatory system, as it is known to enhance circulation. A number of benefits derive from this. Ginkgo improves blood circulation to the brain, therefore may be effective in treating memory related problems, headaches, mood problems, hearing problems, etc.

Side effects reported are usually minor and include dizziness, stomach upset, headache, constipation and forceful heartbeat. There is also concern that it might increase the risk of bruising and bleeding, since it thins the blood. This is the reason why patients with a history of bleeding disorders or about to go into surgery are advised not to use Ginkgo Biloba based products.

2) Details on Ginkovital Ingredients and Uses

3) Does Ginkovital Work and it is Safe?

Promoted as a product that enhances circulation within the body, from the brain to extremities, Ginkovital is composed of three herb extracts. One of these is Ginkgo Biloba, a popular ingredient, usually used in brain supplements. Medicinally used in North America, extracts of this old tree species are used to treat problems such as glaucoma, sexual dysfunction, and Alzheimer’s disease and enhance memory and blood circulation. The reason this herb is known for enhancing blood flow is that it contains compounds with the property to thin the blood, thus helping improve muscle tone within the walls of the blood vessels. However, consumption of Ginkgo Biloba based natural remedies might lead to some side effects such as headaches, muscle weakness, and digestive problems.

Another compound of this remedy is Siberian Ginseng. Also known as eleuthero, this plan contains active ingredients called eleutherosides which are thought to have a role in stimulating the immune system. Traditionally, people have utilized Siberian Ginseng to prevent flu and colds and to increase vitality and energy. In Russia, it is viewed as an adaptogen, a substance that should help the body cope with stress. Even though there are no studies to support these claims, Siberian Ginseng is often used to restore and maintain alertness. Using nutritional supplementation that contains Siberian Ginseng may lead to some unwanted side-effects including irregular heart rhythm, nosebleed, and high blood pressure. People using corticosteroids, digoxin and anticoagulants should avoid Ginkovital.

There are few online testimonials about Ginkovital. What is being reported includes:

6) How Much Does Ginkovital Cost?

Ginkgovital is sold by bottles containing 30 capsules. Thus one bottle is sufficient for a month treatment. Its price is viewed as affordable, especially in comparison with similar products. This remedy is found for sale on manufacturer website as well as some other online retailers.

The recommended daily dosage is 1 capsule. Also, there are no consumer reviews available.

Ginkovital is a single ingredient product based on the extract of Ginkgo Biloba. The product is marketed as an aid for the heart and blood circulation (including peripheral circulation in the hands and feet). Other than that, the manufacturer offers little information on how the product is supposed to work. Also, there is little differentiation from other similar products based on Ginkgo Biloba.

Also, there are no consumer testimonials or reviews of the product; therefore, it is difficult to make a fair assessment of the product’s effectiveness. Given that Ginkgo Biloba is known to interfere with a number of body functions or processes, although research is limited, we recommend caution. 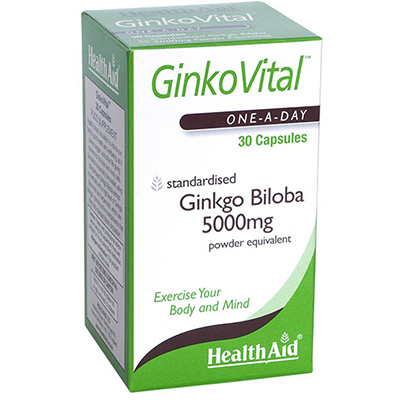 clear
Q:
What are the core ingredients in Ginkovital?
A:

Presented as a product that can help people to obtain an optimum memory activity, Ginkovital contains herb extracts that are known for their beneficial properties. It is recommended for those who want to strengthen heart muscles and nerves, because it improves blood flow. There are some side-effects related to the usage of Ginkovital and it any occurs, the treatment should be stopped. Because this is a dietary product, label dosages should not be exceeded, and to obtain results, the treatment should be done while following an exercising program and a healthy diet.