Inositol is advertised as a remedy that targets the support of nervous as well as cardiovascular systems. The only ingredient found in this formula is represented by Inositol, obtained from corn and being a part of the B-complex vitamins, therefore acting like catalyst in metabolizing some sugars and fats.

The business behind this dietary supplement is called Standard Process and was founded in 1929 by Dr. Royal Lee, the same company behind the bovine-based supplement Catalyn.

In comparison to other similar nutritional businesses, its creator claims that the major difference is in the fact that their philosophy is based on the idea that the compound’s source is of more importance than the quantity used in any of the products. Due to this feature, even a small amount from a whole food may offer better results compared to higher quantities.

In addition, its producer claims to possess a series of degreed chemists and microbiologists that conduct bacterial and analytical tests upon raw materials, product batches and in the end to the finished product. Due to this, the safety and quality of the supplement should have been taken care of.

The daily recommended dose of Inositol is one tablet per day, with water and before eating. Even vegetarians and vegans may take advantage of this treatment with no further problems.

Positioned in membranes surrounding every cell of the human body and playing an important role in the body’s complex internal communication system, inositol is needed for the transfer of the body’s chemical orders that leave from bloodstream and go to the interior of the cell where can be filled. Neurotransmitters and hormones which travel through the blood will get attached on the outside of cell membranes, hence stimulating the dispensation of an inositol compound. Afterwards, it migrates inside the cell where it triggers some specific functions like secretion of digestive histamine and juices, clotting assistance, muscle contraction and glucose production.

This reliable and fast neuro-communication is specifically important for the central nervous system as well as the brain. Due to the fact that these tissues have large amounts of inositol, the levels should constantly be on normal numbers. A remedy based exclusively on effects of inositol is Inositol.

2) What Are Inositol Ingredients?

Found in membranes surrounding each cell and playing a key role when it comes to the body’s complex internal communication system, Inositol is required to transfer the body’s chemical orders from bloodstream to the interior of the cell where they can be filled. Hormones and neurotransmitters that travel throughout the blood eventually get attached to the outside of cellular membranes, thus stimulating the release of an inositol compound. Inositol migrates inside the cell and triggers a series of specific functions such as secretion of digestive juices and histamine, glucose production, and muscle contraction.

This fast and reliable neuro-communication is particularly important for the brain as well as the central nervous system. Because these tissues possess large amounts of inositol, the levels should be within normal range. A dietary supplement based exclusively on the beneficial effects of inositol is Inositol.

The role of inositol in mental functioning is analyzed in current medical researches. For example, it might also be involved in regulating serotonin which is an important neurotransmitter. Some supplements may lower the pool of inositol in some parts of the brain through a feedback mechanism. Studies conducted on a small scale suggest that this ingredient helps maintain a more consistent and emotional mood. Additionally, it may help people moderate emotional responses when it comes to sudden life changes.

There are online customer testimonials about Inositol. What is being reported includes the following:

Released to the every-day buyer in 1948, Inositol comes in the form of tablets. A bottle usually contains 90 tablets that are enough for three months of treatment if the dosage is properly followed. People may find this product for purchase either on Standard Process official website if they are living in the United States or other local or online supplier. Overall it is viewed as an affordable product which can be purchased by people with minimum wage. For regular customers or on holidays, suppliers usually offer discounts and promotions in order to maintain their clients who are usually satisfied with purchases from this company.

The role of inositol when it comes to mental functioning is decided through current medical researches. For example, it may be involved in the regulation of serotonin, an important neurotransmitter. Some remedies may lower the pool of inositol in some brain parts through a feedback mechanism. Research conducted on a small-scale revealed that this ingredient helps with maintenance of consistent and emotional mood. In addition, it may help people in moderating emotional responses after sudden life changes.

Relying on the beneficial effects of inositol when it comes to the muscular as well as cognitive system, Inositol is presented as an affordable product with reported positive feedback. Specifically, Inositol works in the body because it migrates inside the cells and it triggers sine functions such as secretion of digestive histamine and juice, glucose production, muscle contraction, and clotting assistance.

Due to the fact that it was created and added to the nutritional market in 1948, Inositol currently possesses more than sixty years of experience and most of reviews report positive results. Moreover, vegans and vegetarians can also follow this treatment because it features no animal trace. 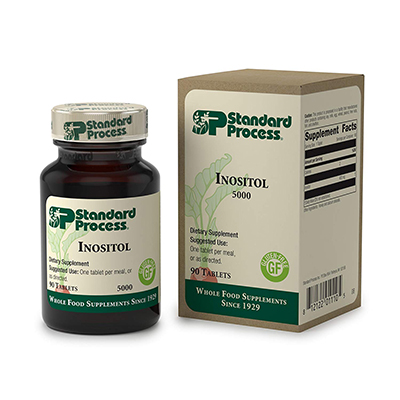 clear
Q:
What does Inositol contain?
A:

Inositol represents a dietary supplement advertised for its beneficial effects on cognitive as well as muscular system. It was introduced on the nutritional field in 1948 and since then has helped people that were suffering from cramps, muscle conditions or cognitive problems like concentration, memory loss, or attention. Its only ingredient is Inositol that works in the body by migrating inside the cell and enhancing glucose production and muscle contraction.

Q:
Does Inositol work?
A:

Based on the beneficial effects of inositol on the cognitive as well as muscular system, Inositol represents a moderate-priced product with reported good feedback. Particularly, Inositol works in the body by migrating inside the cells where it triggers a series of functions like secretion of digestive histamine and juice, clotting assistance, glucose production and muscle contraction.

Because it was designed and added to the nutritional field in 1948, the supplement currently has more than sixty years of experience with the majority of reviews reporting positive results. Furthermore, vegetarians and vegans can follow this treatment because it contains no animal traces or artificial preservatives or coloring.

Took these on recommendation from my nutritionist. Zyto scan results showed a need for B6 in my system. Took these in conjuction with other B vitamins. B vitamins are now within range on my last 2 Zyto scans.