Catalyn Review – 8 Things You May Not Know

Catalyn is advertised as a remedy that features whole food sources in combination with vital nutrients created to fulfill the nutritional gaps daily diets. It is offered in form of chewable capsules that have the taste of cherries.

The company responsible for designing this product is named Standard Process and was founded in 1929 in the United States. It currently distributes around three hundred products that are divided into three main categories which go by the names of Standard Process whole food supplements, Standard Process Veterinary Formulas, and MediHerb. Its establisher, Dr. Royal Lee states that from his perspective, the ingredient’s source used in dietary products is more considerable than the quantity.

Catalyn concentrates on keeping the quality of the heart, hair, and skin by sustaining the metabolism. The supplement was supposedly made in a healthy ecosystem in which there were only organic farming techniques such as fertilizing the soil with nutrient-rich cover crops, rotating crops and practicing weekend-controls. These aspects combined with their manufacturing processes which are done under high-vacuum and low-temperature drying techniques provide the nutritional potential and enzymatic vitality of the components that aren’t divided into isolated compounds.However, their statements haven’t been yet confirmed by the Food and Drug Association.

Catalyn represents a product added on the nutritional market by Standard Process in 1997. Since is beginning, the majority has reported satisfying results. Considering the high demands of today’s society, it was for people who lead busy or stressful lives. It is a multivitamin blend also featuring low amounts of other components that are usually found in homeopathic remedies like pea or soybean lecithin.

One of its main ingredients is Vitamin A that works as an antioxidant for the organism and is important for growth. It is generally used to prevent or treat Vitamin A deficiency that may occur in people with diabetes, over-active thyroid fever, protein deficiency cystic fibrosis or a condition called abetalipoproteinemia. Some research showed that it may also be reliable in reducing complications of illnesses like diarrhea or measles. Regarded as likely safe when taken in amounts smaller than 10 units per day, this ingredient may lead to serious side-effects if used on long-term marked which include anorexia, stomach discomfort, irritability, vomiting, nausea, and mental changes. Due to this, it’s advised to always check the label on products which contains vitamin A in order to avoid a possible excess.

2) Details on Catalyn Ingredients and Uses

3) Is Catalyn Right for You?

Catalyn is a product introduced on the nutritional market by Standard Process in the year 1997. Since then, most of the people have reported satisfying results. It was designed from a constant need of proper nourishment by people who lead stressful or busy lives. It is a multivitamin blend with low amounts of other ingredients usually found in dietary supplements such as pea or soybean lecithin.

One of its main components is Vitamin A which works as an antioxidant for the body and is vital for cellular growth. It is usually used to treat or prevent Vitamin A deficiency which occurs in people with diabetes, protein deficiency, over-active thyroid fever, cystic fibrosis or a disorder that is usually inherited called abetalipoproteinemia. Some studies showed that it could also be useful in reducing complications of illnesses such as diarrhea or measles. Considered to be safe when taken in amounts lower than ten units per day, this vitamin may determine serious side-effects on long-term usage marked by high amounts which include: irritability, anorexia, stomach discomfort, vomiting, mental changes, and nausea. Because of this, it’s important to check the label on every product that contains vitamin A to make sure that it is within proper dosages.

Additionally, there are some bovine and ovine extracts found in this product which should help support corresponding tissues of the organism.

There are online client testimonials about Catalyn. What is being reported includes:

5) What You Need to Know Before Taking Catalyn

Often regarded as an affordable and efficient product, Catalyn is distributed by bottles that contain 90 capsules each. Because the normal recommended dosage is of three capsules per day, a bottle is usually enough for a month treatment. However, if purchased in larger quantities, discounts and promotions are offered. However, people outside the United States can’t order from the manufacturer web page, thus they should seek other online retailers whose prices may vary depending on the ordered quantity. No money-back guarantee is offered either, but most of the reviews about this product are positive, so there are few chances of this products in Effectiveness.

In addition, there are some ovine and bovine extracts found in this remedy that should help sustain corresponding tissues of the body.

Promoted as a dietary supplement which aims to fill the gaps that appear due to an improper daily diet of busy or stressed people, Catalyn represents a multivitamin blend mixed with some plant and animal extracts meant to enhance the vitamin absorption. Online client reviews include help with prevention and treatment of colds and sinus infections as well as improved energy levels for daily activities. It is often viewed as a side-effect free remedy, but only if the label dosages respected and there is no excess. High amounts of this supplement can determine unwanted effects and the usage should be immediately ended if any of them appears. 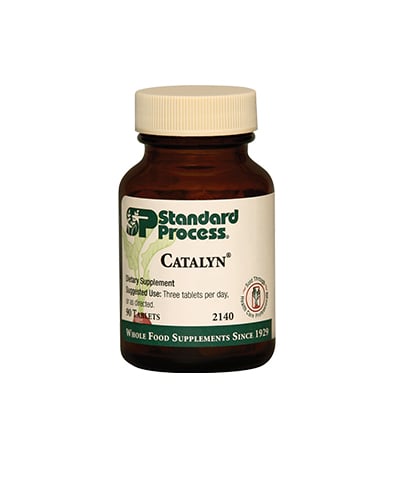 clear
Q:
What does Catalyn contain?
A:

Q:
Catalyn is all about what?
A:

Catalyn represents a homeopathic remedy which aims to help with the treatment and prevention of some medical conditions like common colds or sinus infections. It is a multivitamin blend mixed with some animal and plant extracts which aim to enhance the absorption of the supplement by the organism. It was introduced on the market in 1997 and since then has had a fair share of positive testimonials. If there is no excess, the probability of experiencing unwanted side-effects is close to zero.

Advertised as a dietary supplement meant to fill the gaps determined by an improper daily diet of stressed or busy people, Catalyn is a multivitamin blend combined with some animal and plant extracts meant to improve vitamin absorption. Reported client effects include help with treatment and prevention of colds and sinus infections as well as raised energy levels for everyday activities. It is often regarded as a side-effect free supplement, but only if the label dosages are followed accordingly. High dosages of this supplement may determine unwanted effects, and the treatment should be immediately stopped if any of them occurs.

Catalyn was recommended to me by my accupunturist and my nurtitionist, both of whom sell different products but agree that Catalyn is the best quality, most absorbable multi on the market.

I hate to sound like a cliche or an infomercial, but my chiropractor first recommended these and the Cataplex B vitamins by the same company, and they totally changed my energy level and I just felt a lot better on them than I ever had.

I have been using Catalyn for many years and have found it to be an excellent product and quite economical.

I have been taking this Catalyn for about a month and a half and love the way it makes my 87year old body feel! I could hardly walk when I started and am about 50% better after only a short period of time. I can hardly wait to go on with this “real find” and get “young” again quickly! I have been taking Min-Tran with it and need refills. Where can I get them close to Castleton? How much are they? My limited income is no help in that direction.