Sesame Seed Oil is designed to deliver antioxidants in a mixture of naturally occurring Vitamin E and sesame oil. The manufacturing company Standard Process claims the formula supports a healthy liver function and the immune system. However existing research indicates that sesame seed is also beneficial for the brain as it contains high concentrations of unsaturated fat.Also, sesame seeds contain tyrosine, a substance which contributes to the secretion of the neurotransmitter Dopamine. Low levels of Dopamine have been linked to Parkinson’s disease, ADHD and depression.

1) What is Sesame Seed Oil?

Sesame Seed Oil contains Vitamin E and fatty acids form sesame oil.Sesame seeds contain a number of nutrients that benefit specific bodily functions as well as the overall health. These nutrients include Zinc, fiber, Iron, Phosphorus, as well as amino-acids Tyrosine and Tryptophan. It also contains Sesamin, a compound demonstrated to support liver and kidney functions, as well as to possess potent antioxidant properties by increasing the use, recycling and absorption of vitamin E.

Zinc is the most abundant trace metal in the brain and an important element in supporting and increasing learning capacity, memory and brain development. Zinc deficiencies have been associated to memory impairment conditions such as Alzheimer’s disease and dementia. Several studies which examined the effects of Zinc supplements as an adjunct to treatment with antidepressant drugs concluded that Zinc was able to significantly lower depressive symptoms of participating patients. Its individual effectiveness on depressive symptoms manifested by healthy patients is yet to be validated.

Sesame oil is also rich in Tyrosine, one of the 20 amino acids found in the human body. It is an important building block for neurotransmitters such as Epinephrine, Norepinephrine and Dopamine. These neurotransmitters help regulate various functions of the human body, many regarding nervous and brain function. For instance, Norepinephrine has come to be recognized as important to attention and focus. It is believed to be effective in treating ADHD disorder symptoms as well as with certain mood disorders including treatment of Bipolar Disorder and depression.

There are no serious side effects associated to the formula; however nausea, headache and slight hair fall have been reported.

3) What Does Sesame Seed Oil Do?

Representing a mixture of fatty acids obtained from sesame oil and vitamin E, Sesame Seed Oil focuses on delivering the body the necessary amount of nutrients to have a positive impact on some bodily functions and overall health. The nutrients contained in this supplement include fiber, zinc, phosphorus, iron, and some amino-acids like Tryptophan and Tyrosine. Another important component is sesamin, a compound that was demonstrated to support kidney and liver functions while offering potent antioxidant qualities due to increase in absorption and recycling of Vitamin E.

As an abundant trace metal in the brain, Zinc has a significant role in enhancing or supporting memory, brain development, and learning capacity. Notably, deficiencies of zinc were directly linked to some memory impairment conditions like dementia and Alzheimer’s disease. Other similar studies examined zinc’s effects when it came to adjunct treatment with antidepressant drugs and revealed that it significantly lowers symptoms of depression in participating patients. The personal efficacy on depression symptoms that manifests on healthy patients requires further research.

Another core ingredient of this formulation is sesame oil which is rich in tyrosine, one of the amino-acids found in the body. This compound is important in building block for neurotransmitters like Norepinephrine, Dopamine, and Epinephrine. For example, norepinephrine has a major role when it comes to focus and attention. Moreover, it may even help alleviate symptoms of disorders like ADD or ADHD as well as depression and bipolar disorder.

There are online testimonials about Sesame Seed Oil. What is being reported includes:

Sesame Seed Oil is a product sold by bottles that have 60 pearls, which means that to follow this treatment for a month, only one bottle is required. However, for longer treatments, the price per bottle considerably drops. The supplement may be purchased either from official manufacturer website or other online or offline retailers. Although its price ranges from retailer to retailer, it can be viewed as a moderate-priced supplement overall. For people outside U.S., it i,s advised to carefully browse through the internet to find the best price for this supplement. No free samples are offered.

7) How to Take Sesame Seed Oil

The recommended daily dosage of Sesame Seed Oil is 1 capsule. No precautions, drug interactions or other warnings are mentioned by the manufacturer. The number of consumer reviews for the formula is limited.

Sesame Seed Oil is advertised to support liver function and the immune system. However, sesame seed oil has far more health benefits which include cognitive function enhancement, emotional balance and mood regulation and support for the kidney function. The formula offered by Standard Process has received a small number of consumer reviews; however the excellent reputation of the manufacturer may in itself represent a guarantee of the good quality of the formula. The product was introduced on the market in 1962 and its current existence points may testify to its popularity. Its actual effectiveness is however difficult to assess, and we recommend that you consult a healthcare provider prior to using the formula. 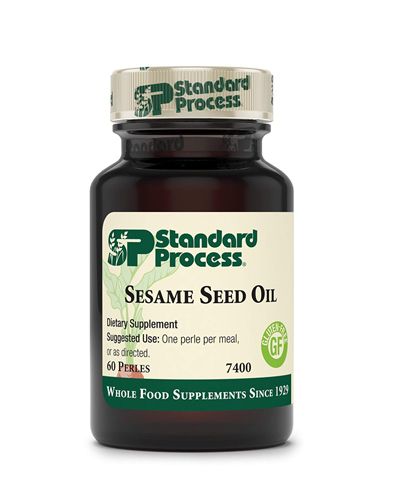 clear
Q:
What does Sesame Seed Oil contain?
A:

Q:
What is Sesame Seed Oil supplement?
A:

Sesame Seed Oil is promoted as an immune system and liver function support. Its effects rely on the core ingredient of the product that is sesame seed oil. This oil contains a series of amino-acids as well as Vitamin E that work together to alleviate symptoms of depression, ADD or Alzheimer's. Considering the fact that this supplement was released to the public in 1962, it is a good natural alternative.

All in all, Sesame Seed Oil is marketed to support a healthy liver function as well as the immune system. Sesame seed possesses a far larger palette of benefits that range from emotional balance to mood regulation and support of cognitive function enhancement. The formula is offered by Standard Process, a company with an extraordinary reputation on the nutritional market. It was introduced in 1962, and it has many evidence points both from research and customer testimonials that testify its efficacy. People with allergies of zinc as well as pregnant or lactating women should consult a healthcare before its usage.

I could totally feel more energetic after two weeks of usage! I recommend this product to everyone who wants to improve their health

Great product as are all Standard Process products. My chiropractor tell me which products to take.